We have water. Finally. Tuesday night, they found the problem in less than an hour and by 8pm we were back in business. I got so much shit, though, from everyone (the plumbers were jokesters) when I joyfully exclaimed "water!" from the master bedroom sinks. I was so happy to be able to turn on the faucet and have water flow out, and they though I had found a leak and there was water and came running upstairs after shutting off the main again. Oh, did they relish in making fun of me for SEVERAL HOURS after.

So, there has been much carnage. First, after setting traps last night, we got the mouse. I'm not sure if he is the only poor bloke, but he was easily fooled. I'm not sure he was the smartest mouse - the amount of time he spent outside his cave looking at us this past week was unbelievable. I had a feeling he'd be easy - not like the mouse we had in Lake Elsinore that took several months to catch. I feel bad for him - he was awfully cute. But catch and release is pointless - they'll just come back in. Plus, they carry diseases (hanta virus!) and uncontrollably poop everywhere so we couldn't keep him around. Sorry little guy.

Second carnage was felt by my wallet. We are $5600 poorer. Apparently, he gave us a good deal compared to what he had the other guy down the street paid a couple years back (he told me not to mention it to him), so I guess can't complain. Much (I will always complain some - not to him, just to the Universe who is the recipient of much complaining from Yours Truly). The guy down the street did his own demo, and the plumbers did the demo for us. Copper parts alone were $1425. The price of copper is outrageous. I'm wondering if I should start melting down pennies or something.

The the final carnage was committed to my house. I am not even sure how many holes in the walls and ceilings we have. Nevermind the water damage, and the carpet that we have started pulling up. Here are some pictures of the carnage - if I tried to show them all you'd be here all day. I don't even thing I have pictures of all of the holes at this point.

Starting with the garage - all the way at the end is where the mouse-house is, under the water heater. Picture is tilted but I'm too lazy to fix it now. 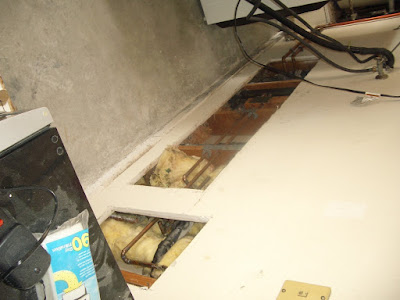 Main water line area - this is the living room, front of the house. There are more holes up the wall to run the lines upstairs. 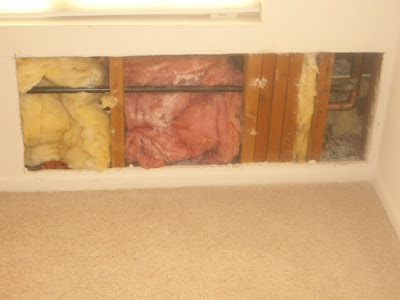 Small sampling of the holes in my bedroom. 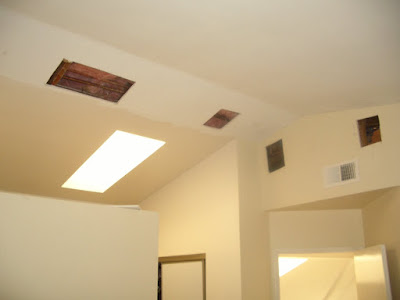 And just a few holes from my kitchen. 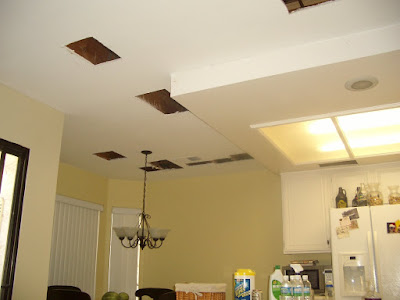 These kitchen holes will not be fixed, just meshed over. Why? Because that wall is getting moved back and the kitchen moved into that space. No point in fixing it if several months from now it'll be ripped out.

Imagine, we have 4-6 times more holes than I have shown you. It's going to take months to fix them all up.

Time to head to the office so I can be bored out of my mind.
Labels: etc home improvement trainwreck