It’s the day after the race and while I’m sore, I really expected to have serious trouble walking down the stairs. Not the case – my quads are ok. The stuff that’s sore is my hips and my ankles/feet/lower calves. Not sure why on the former, but for sure I know why my ankles are sore. Miles 9-19 involved traversing lots of loose, rocky, ankle-rolling, curse-word inducing trails

The Husband dropped me off at Tucker Wildlife Sanctuary around 5:30am and drove home to catch more Z’s and hang out with the dogs. It was around 55 degrees which felt great but I knew it was going to be short lived as the sun had not yet risen fully. The 50K had it’s own start at 6am. It was nice to not be completely crowded with runners from the 15 and 30K. The 50K had 56 runners (55 finishers) and only a few of us were running our first ultra (maybe 3-5 hands sheepishly went up when the race director asked). We took off a couple minutes after 6am with little fanfare – in fact most of us didn’t even realize the countdown to the start was happening.

The course begins at Tucker Wildlife Sanctuary up Harding Truck Trail to Maple Springs. Then you do a series of 3 out-and-backs to Modjeska Peak (5384 feet), Santiago Peak (5689 feet, highest point in Orange County), and Modjeska Peak again. 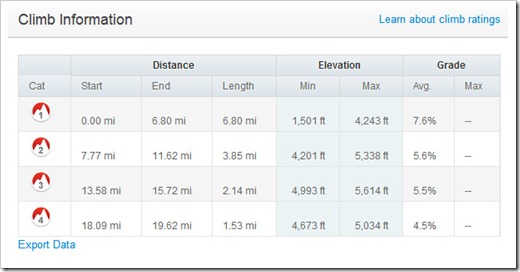 Immediately, I felt like I was running up a wall. Extremely steep.Note the above 7.6% grade for 7 miles. Around me, most people’s breathing was crazy – I was concerned that we had just started and this was already the scene. But I was “in” so, unless I was seriously in trouble of getting hurt/injured, I was going to tough it out. We had a tiny little break in climbing at mile 1.5-ish, but, other than that the first 6-7 miles were billy goat territory. To add to the climb, at that point, I had a full reservoir of banana nuun (70 oz) and various other items packed, so, I was lugging around an extra 5-8 pounds up the mountain.

The first aid station, I didn’t spend a whole lot of time at, according to Garmin, looks like about 90 seconds. Grabbed some boiled potato, some water, and took off. I was, at least, relieved that I was well under the required 16:25 cut off pace. After mile 7 the climb got less steep. Somewhere in this stretch, I realized that my if I didn’t take off my rings ASAP with the way my fingers were swelling, it could get ugly. It was actually pretty tough getting them off, but I managed to do it and I stowed them in my zipper shorts pocket.

Side note/back story: the day before I had spent a couple hours Googling random 50K race recaps and read one for the 2011 Bull Dog 50K where the blogger noted the conditions were hot and that he was sucking down salt tabs every 60 minutes. I had not even considered salt. Then again, I’ve never run for 6 hours straight in heat. So, on the way to bib pickup, I stopped at RRS for Salt Stick caps which cost a flippin’ arm and a leg ($19.99? For salt and some other stuff?).

90 minutes into the run, I touched the side of my face and it was already littered with salt crystals. So I started taking a salt cap every 60-90 minutes – generally whenever I’d start feeling a cramp somewhere in my legs. I am so glad I read that blog entry and decided to pick some up.

Anyway, back to the race. Somewhere in the first 6 miles I snapped this pic: 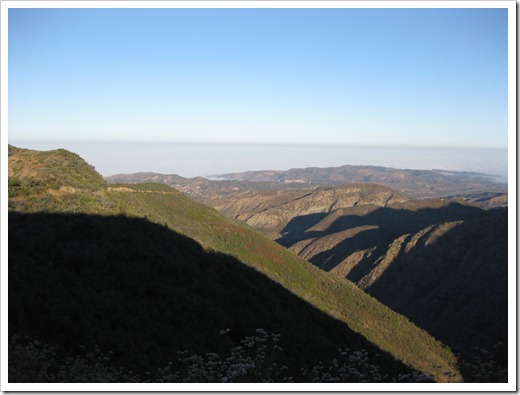 Hello, Marine Layer – too bad you didn’t feel like hanging out inland! Though I have to say that without the fog the views were incredible. 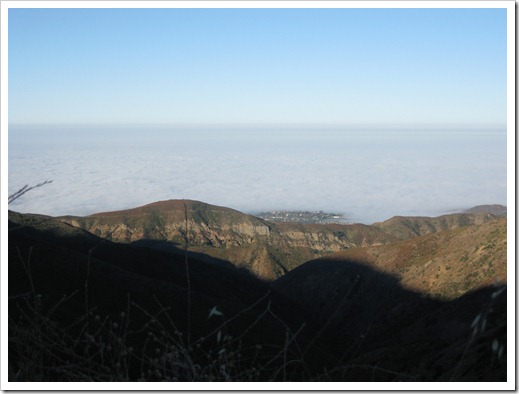 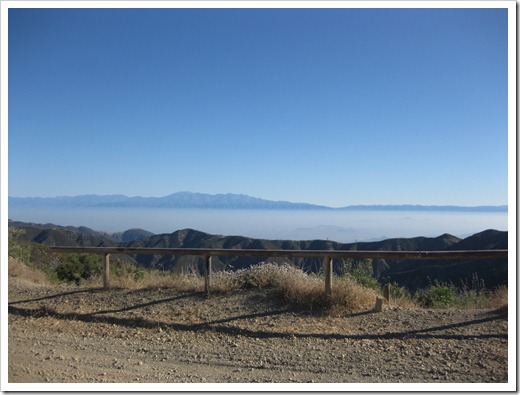 This one was a full aid station with tons of goodies – including watermelon and coke. The coke was freaking awesome. I spent another minute or so here knowing the next pared-down aid station was only a mile and change away at 10.5.

When I got to there, the volunteer informed me that I’d be seeing her 4 times (!) as we had to run the Modjeska Peak trail twice – roughly 2 miles roundtrip. It was almost impossible to run up this trail. So much loose, chunky rock. Nearly everyone I encountered was coming down was cranky – the leaders especially. I can’t even count how many times I rolled my ankles. It, straight up, hurt to run or walk this stretch. 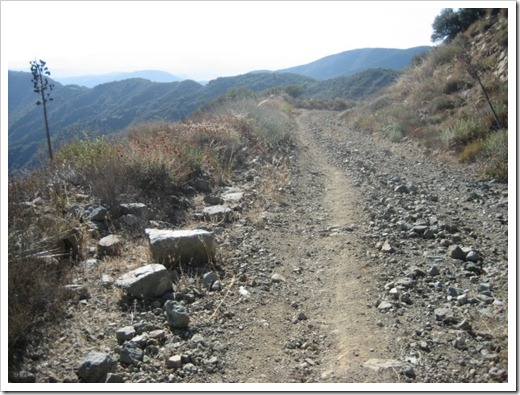 The Modjeska Peak trail was like a turd-covered diamond. Everything about it sucked – except the views. They were probably the best of the course. Even better, in my opinion, than Santiago. You could see Cuyamaca in San Diego, Lake Matthews in Corona, much of the Inland Empire and surrounding mountains. I went to snap a pic on the first time up and found my camera battery was dead. Booo. So I got to lug that extra useless weight around with me the rest of the trip. I figured at Santiago I’d swap out my cell phone from the back to the front pocket so I could take some pictures.

The trail up to Santiago was marginally better but still had loose rock, lots uneven embedded rock, and required some careful foot placement. But it wasn’t super steep (though Map My Run still classifies that part as a Cat 3 hill with 5.6% grade). I certainly took walk breaks with that kind of grade and elevation.

When I got to the peak it was 3:38 which was about what I expected to do time-wise. I tried to be as efficient as possible, but apparently I spent nearly 9 minutes here. Sheesh. My hydration pack was empty – I had burned through all 70 ounces and several cups of water and coke at aid stations. So, I had to get it filled with ice and water. Unfortunately, unlike the rest of the aid stations that had Grape and Pink Lemonade Nuun, this one only had Tropical and Fruit Punch which I could not stomach for 15+ miles. My least favorite options along with Tri Berry. Yuck. Thankfully, I had put some in my drop bag – I grabbed whatever I fished out first (Lemon Lime) and dropped in 3 tabs. I reapplied 50+ SPF sunscreen, ate some random stuff from the fully stocked aid station, and then a volunteer offered to snap a picture of me. 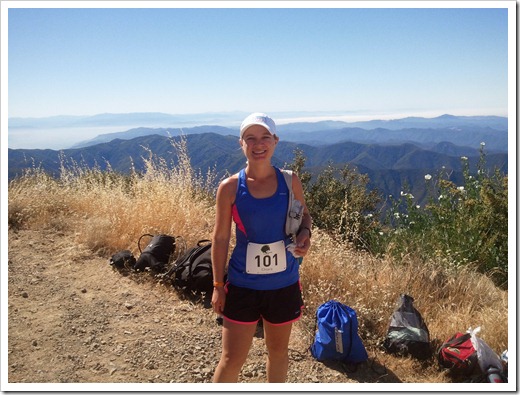 The volunteers of this race were awesome. I definitely need to volunteer in the future to pay it forward. 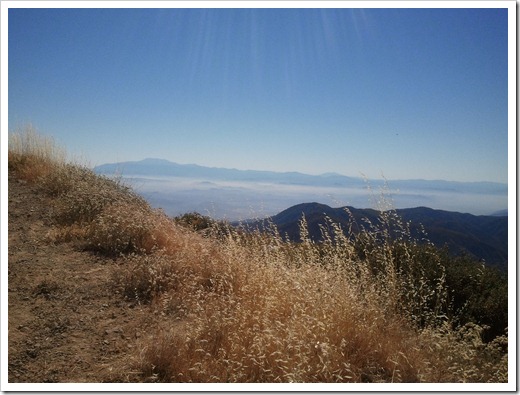 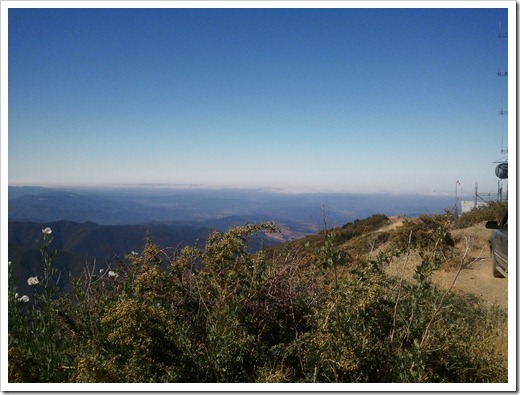 I finally headed back out, nearly got lost if not for another runner hollering at me that I was going the wrong way. I had told myself that once I completed that last rocky piece of shit Modjeska climb that I’d be in the clear.

I caught up to two ladies and another dude at the base and we all walked up it, though, my short legs meant that I could not keep up their pace. I took a quick stop half way to get a shot of Lake Matthews. 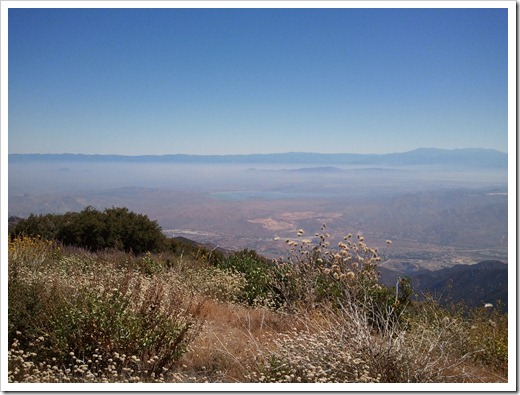 I hit the peak, turned around, and attempted to slowly run down, but, after rolling my ankles 2 or 3 times, I finally said (out loud) “Oh, fuck it” and just walked until I got to a couple stretches where it wasn’t 100% loose rock.

It had started getting hot – the sun had come up enough that it was no longer behind the mountain so we were completely exposed. Update email I just got from the race director said by early afternoon the temps were pushing upper 90s. I had caught up with the two ladies, at the Maple Springs aid station. A little over 9 miles to go. I was feeling pretty good, so I was positive. Overall, most of this race, I was pretty smiley, cheerful, and happy. Nothing like zero-PR-pressure to make a race enjoyable! I spent 2-3 minutes at this aid station before taking off. From here on out, no one passed me. I ended up catching 3 dudes on the way down.

Around mile 24 it started feeling gross. I chatted with one fellow I caught up with who was having leg cramps. I offered him some salt caps since I had extra, but he said it was “too late” (I beg to differ on this one, it certainly wouldn’t have hurt to take some – was worth a try) but after offering a second time, I gave up.

My legs were starting to ache pretty good. At mile 25 we hit an uphill stretch of which I walked probably about 50%.

I knew at that point I was going to finish under 7 hours, but it was looking like it would be on the higher end of 6 hours which was a little longer than I had expected. However, it had gotten so warm without shade that I really didn’t want to risk heat exhaustion or passing out. The back of my arms felt like they were burning - it would turn out it was more chaffing than sunburn. But when I looked at my arms they appeared red, so I prayed that the last aid station would have sunscreen.

Even though it was downhill, I would occasionally try to walk. And walking felt so much worse than running. Which kind of sucked because at times I wanted just to take a bit of a breather, let my heart rate come all the way down, but walking downhill just felt like crap. Finally, I saw the Laurel Springs aid station which I knew was around 4.6 miles from the finish. As I rolled in and they marked down my bib #, I asked if they had sunscreen – and they did! Such a relief. The one volunteer seemed very concerned about all the runners – he wasn’t there on the way up so I am guessing he was just seeing all the people on the way down looking fried and worked over. He convinced me to drink another cup coke. I complained/whined that I really didn’t want to go back out. I finally left the aid station after 5 minutes.Yeah. Five freaking minutes I lingered there.

The last 4 miles felt like crap mostly because it was so hot out. Seeing as this is a trail in the middle of nowhere, running down it would get me out faster than just sitting down and waiting for an aid station truck. Around mile 29 or so my Garmin beeped “low battery” but I figured it had enough juice to get me to the finish. There was one quarter mile uphill bit that I walked (uphill walking felt alright), and then I just shuffled down the trail, draining the rest of my nuun, and forcing myself to eat some clif blocks.

Volunteers lined the little finish stretch and cheered for every 50K runner coming in. Seriously, awesome. I crossed, official time, 6:43:40. 6th woman of 19. 22nd out of 55 overall. 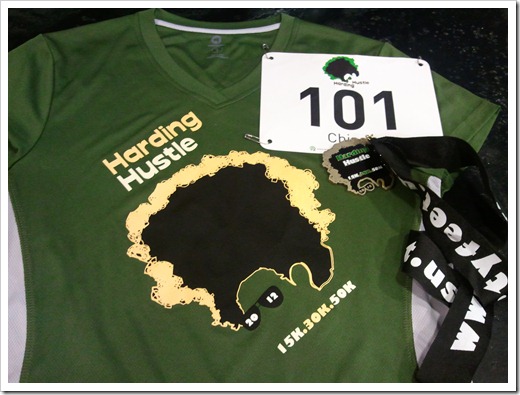 It’s a dude with a huge afro! Pretty funny theme with the whole “hustle” bit.

The winning female finished 5:12, second female was 5:54. From there, they were all above 6 hours. Which speaks to how much of a ball buster this course was. The dude who finished 6 minutes ahead of me has run several 50 milers and looked to be in good shape and I probably could have caught him if I wasn’t just hanging out at Laurel Springs. When I saw that only 2 men broke 5 hours (and not by much) I concluded that (while I always feel I can do better) I did pretty well for my first 50K with very little trail experience.

Maybe next time I won’t pick a course that involves climbing 5000 foot mountains in July in Southern California!