It might be a good idea to choose your plumbing fixtures BEFORE you have the plumber run the lines. What now? Right, what now, already, with this project.

Obviously, I didn't have my faucet or potfiller decision made until after walls were up, plumbing in place, etc, etc, etc. Further compounding the problem was that the matching potfiller to my faucet was a special order item - according to the supplier - 1-3 weeks. Turned out to be 9-10 weeks. I finally got it yesterday, so you can imagine I was in a hurry to get the durn thing in place considering I'm been waiting FOREVER for it to arrive. So I busted my hump to get tile and grout in behind the stove. Here are some lovely photos: 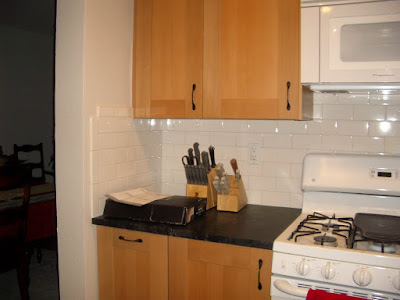 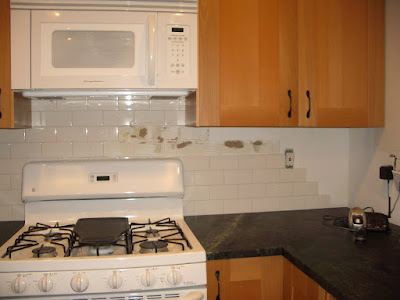 What's that ripped up area over there over the stove, you say? That would be lesson #1,576,774. The pipe is too high. The potfiller doesn't fit - it hits the bottom of the microhood. I was annoyed last night when I discovered this. Very much so, but I think I'm getting more mature in my 30-year-old-ness because there were no tears. In the past I might have had to get all female and cry about it after putting in all that work on the tile, but I was able to hold my shit together. So this morning, after I dragged myself to the Y with The Husband (Yes, 5am. Yes, I am a masochist), I started popping tiles off so that the plumber will be able to move it 3 inches down and 3 inches over (because directly down is a 2x4 running horizontal across the studs - thanks to the mid-remodel pictures we were able to figure out that directly down probably wouldn't work).

The other item that was successfully installed by The Husband was an overhead fan in the family room. Took him a couple hours, and he did call it a "piece of shit" a few times during the process, but he managed to get it installed and working. I was just glad I didn't have to do it. 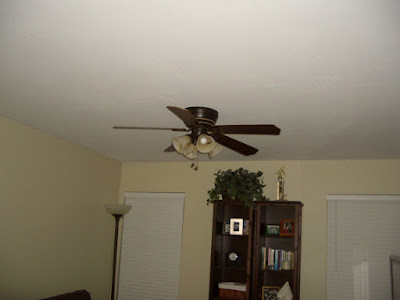 What's the deal with that trophy, over the bookshelf, in all it's plastic gold glory? That is yet another thing that my mother in law left at our house and I'm too short and lazy to get it down. Apparently, it's some little league trophy of my husband's from when he was a kid. On the second shelf is also a miniature cannon that was my husband's, also from her. This is one of the reasons my mother in law drives me nuts. She brings/sends us all kinds of useless stuff from his childhood - this is the second trophy she has brought us from her secret stash. The other one she brought last year is packed up somewhere in the house and says something like "Most Outstanding Seven Year Old." She is the Bringer of Clutter. She also brought us one of his senior year research papers - what the heck are we supposed to do with that? Marvel at his 17-year-old writing capabilities? I mean, I have keepsakes from my childhood, too, but not EVERYTHING. Lord knows what happened to my little gymnastics trophies from when I was 5 and 6, but do I care? Am I pining away for them? No. Eh, it's a useless thing to bitch about. I can't change it. I'm destined to be presented on a yearly basis with a box full of clutter.
Labels: family home improvement kvetch-ing