If I Actually Had a Checklist...

...I could cross the pot filler off as DONE! I actually have about 18 million ad hoc to-do lists, so perhaps I could cross it off several times on some old, scribbled down, doodled lists in my work notebook. The only annoyance with the pot filler is that it's a little crooked, through no fault of the plumber. I read another guy's comment of this same fixture on Amazon and he said his leans as well. If I really had it in me, I would harass Danze about it, but it works, it's not leaking, it just leans some likely because of the weight of the it (it is definitely a solid fixture, nothing flimsy about it). Probably, they'd just send me another one of the exact model (after 9 weeks, no doubt) and it would do the same thing and I'd be out more money to the plumber. 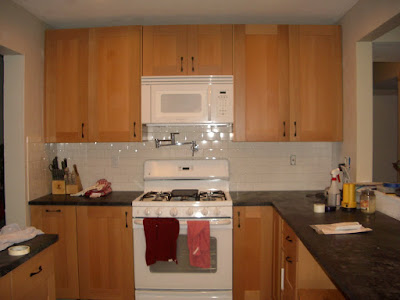 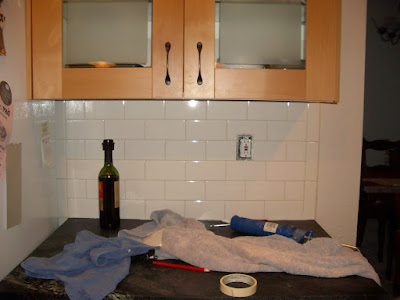 Here are the assembled stools from Walmart I am itching to paint red. They look nice as-is (can't knock 'em for $37 a piece), but I am jonesing for some colorful pieces like Girly Stuff's red hutch and Liz's (Mabel's House) turquoise cabinet. 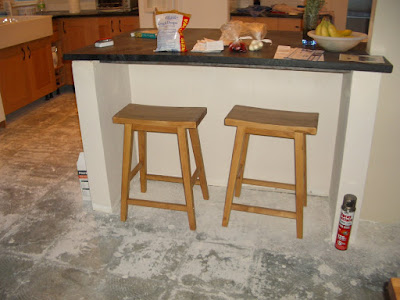 Sitting there on the side is a can of spray texture from Lowe's - it is the most evil smelling, caustic stuff ever. The orange-peel spray from Home Depot smells good and washes up with water. This stuff from Lowe's smells dangerous and cleans up with paint thinner. Last time I buy orange peel spray from Lowe's.

Also, just to show you how haphazard I am with house projects lately, I had the overwhelming need last week to hang something up in the kitchen area that was decorative. It's a little strange, but I just couldn't help it. So I painted up that area with the Water Chestnut and hung up my $5 Ross Wino Art. 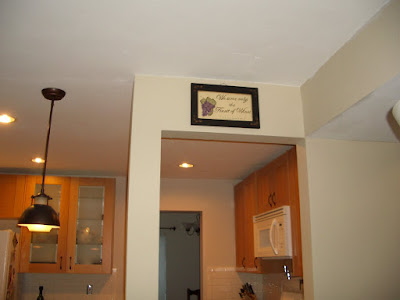 High today is 80 degrees and sunny! Too bad it's not a Saturday because that's totally beach weather.
Labels: home improvement