California was blowing it up this morning at the Inauguration ceremony. Diane Feinstein, the master of ceremonies, Pastor Rick Warren from Orange County, and Nancy Pelosi. And I have to tell you, when Aretha Franklin sang "My Country, 'Tis of Thee", I got pretty emotional. The whole thing was just awesome to watch and I can't get over how cute the two Obama girls are. It's refreshing to see a young family in the White House - it brings to life how they are so much like every American with a family, jobs, homes, etc. It is such a historic day... however, this man has a huge mass of problems ahead of him - I hope he will be able to lead us out the hole we are in. In my own weird way of talking to God, The Universe, Higher Power, what have you, I will pray for him because I think he needs it. He's got a a hell of a storm to navigate in the new few years.

I am happy to report that after yesterday's run I am able to walk down the stairs without feeling like a decrepit old woman. After 2 weeks of slowly ramping up the working out business, I still have not mustered the courage the get on the scale. The scale and I are not on speaking terms anymore because she is too honest with me. It's probably been 6 months since I weighed myself, and the reality is that it's because I am fearful that I have crossed 120 (at 5 ft tall I'm closing in on the upper number of the normal range - 128). I will need to face the music, though, so I can see if the level of effort I'm putting in with exercise is having an impact or if I have to kick it up a notch.

In addition to picking up paint yesterday, I hung up a bunch of stuff in the office that had been languishing on the floor, including my newly framed diploma (8 years post-graduation). While I still think paying $100 to frame it is highway robbery, at least it's done and looks nice. To the right of the diplomas is a new little arrangement of frames that I had yet to put up on the wall. I tried to not stress too much about lining it all up - I just made sure each one was level. 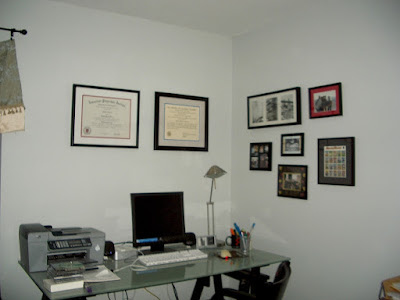 I hung up the corkboard but have yet to find anything I want to stick on it. Because of the existing hanging hardware in the back, it doesn't really lay flush against the wall, so I will have to be careful not to throw the whole thing off level when I stick something on it. Notwithstanding (love it when I can use this mouthy word), I can't complain about something so substantial in size and texture that only cost me $10. 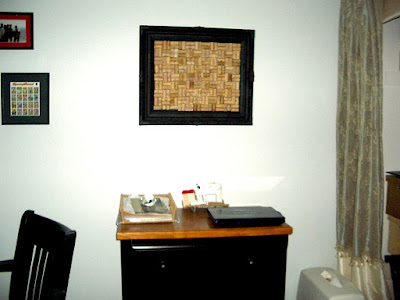 I also rearranged a shelf with my two little blue frames of pictures from the only time it snowed while I was in college. I guess I got lucky, or maybe not because for me, the only good thing about winter is snow. The rest of winter, the dreary skies, searing wind, and freezing temperatures are just miserable. 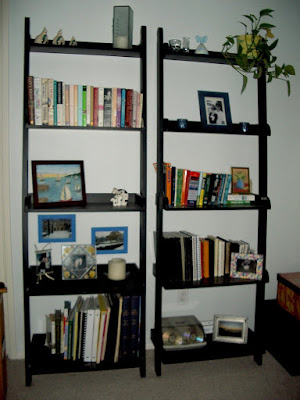 The two paintings on those shelves were done by Yours Truly (the little guy in 1999 and the other one in, I think, 2oo2).

Finally, is anyone watching the Bachelor? I know. I know. Whatever, I like watching mindless TV. Anyway, so, the dress on that Nikki chick? Holy Moly with the boobs. Personally, I think she is a Bitch on Wheels with her hoity-toity-ness, but, by God, if I were a man in his shoes, I'd probably overlook the sourpuss-ness as well. Geez, that get-up was certainly riding the fine line of trashiness with them things hanging out like that.

Nothing like ending a post with boob commentary. Have a good Tuesday!
Labels: home improvement politics running tv