Considering it was a holiday week, I actually got some stuff accomplished around the house. Back when we had the evil slab leak, we decided to cut some holes in the walls under the stairwell to help air everything out and prevent mold. We've had these strange holes in our walls by the dining room table since July and this week I finally got around to the repair process. I decided to rip out most of it so that it was one big hole as opposed to four smaller annoying holes. Plus. I wanted to be sure I removed the damaged drywall. The technique of cutting holes for aerating appeared to work because I didn't find any mold anywhere. Way under the stair case, though, I did find this: 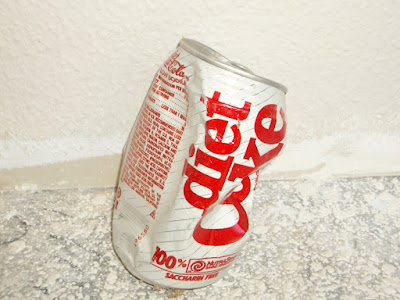 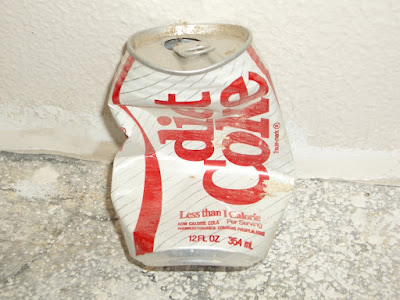 Hello, 1987. I guess the construction workers that built our house were Diet Coke drinkers. Remember when everything was plastered with the brand name NutraSweet for aspartame? And this can has absolutely no recycling deposit information on the top. It seems crazy that in 1987 we still hadn't gotten on the ball yet with bottle/can deposits and recycling. How much time we wasted littering the earth without attempting to get the public to recycle.

I threw the can back under the stairs for someone else to find 20 years from now - I could have recycled it but there's something fun about finding something old hidden in your house, and I didn't want to ruin the fun for whoever owns the house after us.

On Saturday, I managed to finish a project that has been more than 3 years in the making. I started collecting my wine corks in 2005 and finally had enough to make a cork board. It took somewhere around 180 corks. That's roughly 50-60 bottles of wine a year. I guess you could say we like our wine (what can I say? I'm Italian!). I got a frame from a yard sale down the street that was painted an ugly gold. I should have haggled with the guy because I don't think it was worth 5 bucks, but I was on my way to teach yoga, so I didn't really have time to futz around over a couple bucks. I had the Husband make a plywood backing for it and screwed it down to the frame. Thanks to the blog world, I realized that I could spray paint this bad boy, so I got a 97 cent can of black flat spray paint from evil Walmart (that place is like a drug - they have just about everything I need and always the cheapest price. But I can't bring myself to truly like Walmart). I ended up using the whole can and it probably could use another coat, but, eh. Whatever. I got a high-temp glue gun (since I don't trust low-temp glue's ability to stand up to day-to-day use with cork and wood), and started gluing on my corks.

Here it is mid-way through (I wish I would have taken a picture before I spray-painted it, so you could see the gold in all it's homeliness): Here is the finished product. 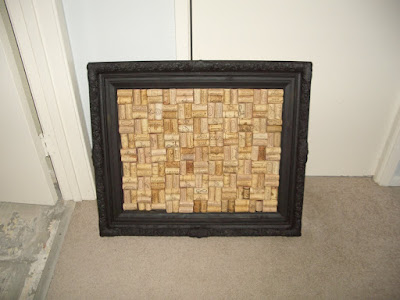 I think it came out OK. It'll go in the office where it'll match everything else in there that is black. I am going to keep collecting my corks - maybe in 3 more years I'll have enough for another one! Now I just need to find some cute push pins (rather than the regular old primary color office-standard ones).

And finally, the last project I tackled yesterday was the sill of the new pass-through in the kitchen. I needed to get it in place before I could start tiling the backsplash. I got a 2" x 6" 4-foot long plank of select pine (only $3), cut it to the proper width, sanded the edges to make them more rounded (since they were a bit too sharp at precisely 90 degrees), and slapped on a few coats of white semi-gloss. I also did a bit of painting on the surrounding walls with Water Chestnut (yup, everyone and their Aunt Mary said Water Chestnut over Sand White), so I didn't have to worry about taping it off and painting it later. 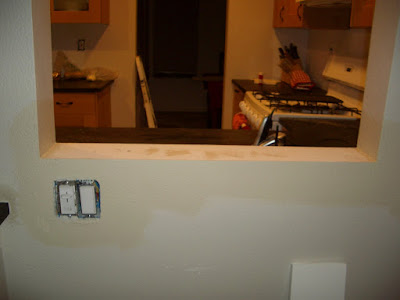 And here is after. 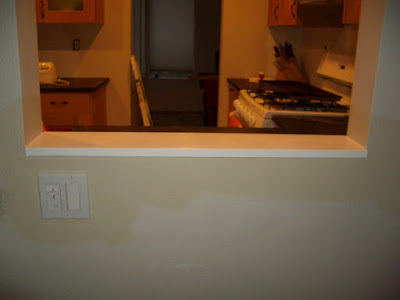 I nailed it down with 2" finish nails and used a nail punch to counter-sink them. I filled the holes with white caulk; I still need to paint over them so they look more finished. I also caulked the areas where the sill meets the wall. Overall, I am pleased with the result.

Maybe this week I can actually start setting some tile for the backsplash!
Labels: home improvement