Ok, I used it maybe twice. Once to look up the exact dimensions of my farmhouse sink on the IKEA website, and the second time to show the electrician my pictures of what the previous dude did before the drywall was hung. He was trying to figure out what the &*^$$! the guy did before him.

I had a long day, yesterday, but progress was made. All the cabinet doors are now hung (except the sink cabinet, those will go on later after we install the behemoth) and the innards of the cabinets are 90% complete. I have two cabinets left that need shelves installed but that's easy peasy. One of them the husband will do because my shortness will make it too damn hard to do myself and expletives will come flying out my mouth if I have to do it.

Anyway, I took a vacation day yesterday as I had two contractors coming over to do kitchen stuff and figured I'd better be home. I got up around 6:30am and began my quest to get as much kitchen crap accomplished as possible during this rare week-day off. My new licensed electrician showed up as promised and found that there were two problems afoot that were unrelated, and I'm not sure if the previous contractor caused them both or just the one in the kitchen. The first problem was a quick fix, the second one, however, turned out to me messier - since my fly-by-night contractor clearly was not 100% knowledgeable about eletrical work. He had me climb up the ladder and look into the inside of one of the recessed light's junction box and the wires were all hanging out in open-air in the ceiling, not contained in a box. Lovely. He had to leave at noon as he has another appointment and but managed to come back and fix it all up before his 3pm appointment. I lucked out finding this electrician dude who sounds like he knows his stuff and is honest -- and, oddly enough, he was born and raised in Italy so we had some fun chatting about the Old Country (my mother was born and raised there and I have spent numerous summers there as a child). It seems like my electrical crisis is now resolved - he said the other lights appeared to be boxed up correctly so it was just this one light that was messy. And there are still some question marks around certain wires that just terminate -- capped off -- in a few boxes, but everything looks "safe." At least now I have a good electrician and a good plumber. Can't move anymore. It's like when you find a good stylist. Can't move or will have bad hair.

The counter top templating guy showed up at the tail-end of his 8-10am appointment (what's new - do they ever show up at the beginning of the time window?) and that provided some stress that the universe felt I must have been lacking. He looks at my cabinets and first brings up the sink, that it needs to be installed in order for him to template for the counters. I explain that it's an IKEA sink - they do everthing ass-backwards. The sink must be installed AFTER the countertops as it is a slide-in top-mount farmhouse sink. He is skeptical and doesn't seem to be buying my explanation of how this thing works. He then looks at some areas where there are no cabinets (like a corner where there is plumbing and near the dishwasher) and tells me that all the supports should be in before he can template. What supports? I was never told what support was needed, so I expected they would tell me when they saw the cabinets configuration (not to mention, in my drawing I gave them, I included this information), where additional support was necessary. "Didn't you get the templating checklist?". Um. No. I didn't any checklist, dude. He steps out to call his manager and at this point I am about to have a cow because I TOOK THE DAY OFF AND I WANT THIS DONE NOW. Stand clear, everyone! A cow is now going to shoot out of my crotch.

He comes back and says he will go ahead and template, and also take pictures so his manager can figure out what he wants to do as far as supports. They can install the supports but it will cost more and they'll call me with the amount. Thank God. Seriously. I want my kitchen back and I am really -- REALLY -- hoping that it'll happen by Turkey Day. 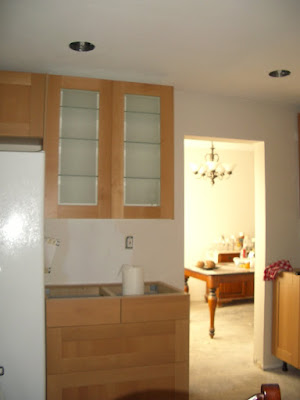 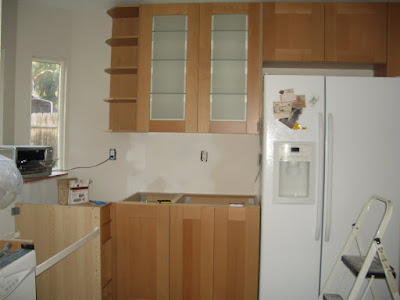 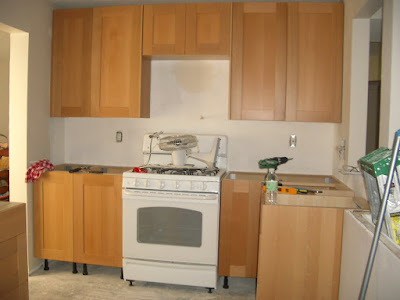 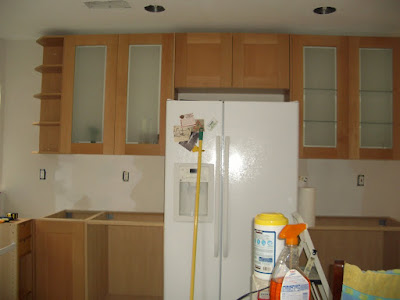 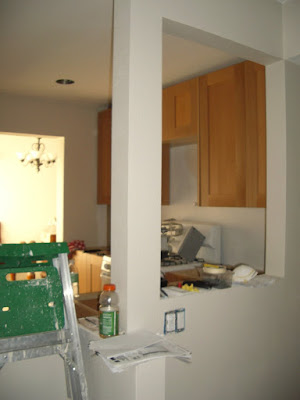