Because I Don't Want To Become...

...known as one of those annoying people that send their friends 18 million email forwards and rarely any substantive email (thank you, Jesus, that maniacal email forwarding phase has died out) I am presenting you with some goodies we bought this week.

On Tuesday, we went to vote as soon as it opened (in fact, we were in line for a bit as we were there at 6:50am), in the rain, no less (rain in Southern California?), and then drove over to the stone yard to buy two HUGE slabs of stone for our kitchen. They are soapstone - yes, the Husband is getting his wish. Because I am OCD about finding the best price for whatever I am buying, it's only going to be about 4 dollars more per square foot than quartz. I couldn't pass that up. And we'll have about 30 square feet of material left over which can either be sold on Craigslist or we can save it for later and try our hand at soapstone counter fabrication for a new bathroom vanity top. I would feel like such the DIY pro if we were able to pull that off.

Anyway, so 3600 dollars later (slabs + 50% of the countertop installation fees), we have purchased our slabs and will have our templating done Wednesday! That means we'll be cabinet assembling and installing fools from now until Tuesday night. 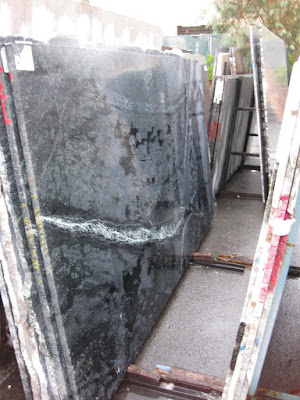 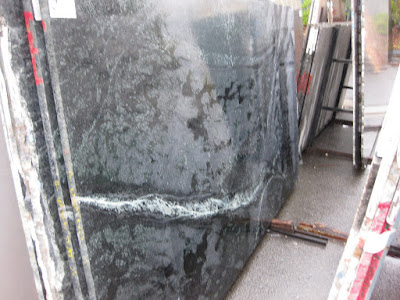 They should turn out a bit darker once they are oiled up. In these shots they are pretty wet from the rain, so it's close to what they'll be, but I think once it soaks in the oil after a few months, it'll be a darker black-grey-green with the white veining.

SUPPOSEDLY, we will have our counters installed by Turkey Day, but I've heard this shiznit from contractors before. I don't know that I have ever had a contractor deliver anything on time. They are the epitome of over-promising and under-delivering. I'd rather you give me a padded date and deliver earlier than promise me something and then it doesn't come through. Eh. It's like they are born with this problem or something.

We shall see. I am REALLY hoping that I will have countertops and a functioning sink by Thanksgiving. If not, we'll be driving out to the hillbilly part of Southern California to have our eats at my parents place.
Labels: home improvement