...my life is uneventful but the reality is I have a lot of stuff going on. Saturday, the counter tops were installed and then we had to run down to IKEA get a new sink and also buy all new closet organizing stuff; Sunday, the plumbers hooked up the sink which was not all that easy; this morning, I got my fat butt into my almost new running shoes and took the dog for our first run in more than 8 months, and I am now sitting here with a numb face and toungue because I just had my cracked tooth done-up in preparation for my crown. I've got that nasty fake acrylic tooth in place until my pretty porcelain guy is finished. And how about the fact that I know I have bitten down (not hard, I don't think. I hope.) on my tongue 4 or 5 times without realizing it and the right side of my mouth feels like it's 15 times its normal size. No lunch for me for several hours. This sucks the big one. I even ran today so I really was wanting some lunch but not if it means I'll be wearing it.

The reality is no two porcelain sinks are made alike. They have minor sizing differences and, therefore, you may fit one sink in only to find that another sink of the same model doesn't fit. So the installers broke the first sink, and when he measured, he didn't trust the IKEA directions on where to put the counters - he wanted to make the fit as tight as possible so that it had maximum support. That's all well and good until you BREAK the sink your measuring against. IKEA has those general guidelines so that all instances of said sink will fit since they aren't all the same. The replacement sink was slightly bigger than the first sink. This meant the plumber and his helper dude - who luckily had an angle grinder with a diamond blade and appeared to know something about stone work - had to cut down the sides of the counter to fit the damn thing in. I mean, he would cut and they'd try it and someplace would still be too tight, and the cycle repeated 6 or 7 times. It's a 124 pounds and has somewhat fragile sides so this is not what you want to be doing over and over again. Eventually they got it to work, but had the countertop people just followed the IKEA instructions, we would not have had this issue with the replacement. After that, it was smooth sailing and they hooked up the faucet and dishwasher air gap. The only unsettling thing is the dishwasher was leaking on it's second run, so we may have to replace it since it was sitting outside for about a month which may not have been the best storage location. Here it is. So Perty. I seriously love my sink and the faucet. It's massive. 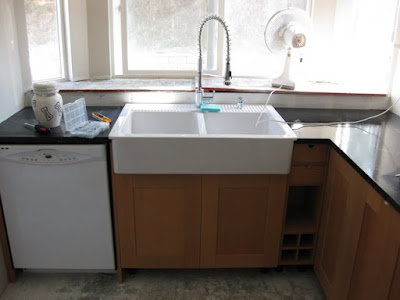 I've been persuaded into doing the Turkey Trot regardless of the fact that I have zero training. I am going to be dragging ass, probably 4-5 minutes off my previous 5K time, but I am trying to get over that. It's not about the time - but tell that to my inner competitor who will feel like a loser when she crosses the finish line with a time over 30 minutes. Ah well. It's for the fun of it right?

I figured, I'd better get my butt in gear and at least try to run the next 3 days so that when Thursday morning rolls around it won't feel like I've been run over by a truck. I took the pooch with me who did quite well (though I had to keep pulling her along when she would try to make her 75th pee stop). She made me quite happy when she pooped next to the only area where I'd be able to throw it out. Oh, was I happy to not have to run carrying a bag of dog poop. I gave her excessive praise for her pooping location. My small 15-20 minute route has 2 hills and that went ok, so I think I'll be able to run the 5K without any walking. If I have to walk during this run I will not be a happy camper.

I will be sporting an acrylic tooth for the next 3 weeks. Are you jealous? Don't you want a fake acrylic tooth, too? Want me to send you mine when I'm done with it? No? At least my dentist rocks the Novocain shot. He is probably the best shot giver I have ever had and I have had 6 different dentists. I really didn't feel any pain, just some discomfort. Normally, it's a good pinch when you get shot in the back of your mouth, but he is good. And, boy, do I feel for dentists. This dentist and even his staff have taken to always apologizing for anything they have to do to you. I just want to say "It's ok! You don't have to say sorry. I'm not in any pain or anything. It's cool," but generally I can't say anything since my mouth is pried open with hands and tools so I just sit there and feel bad that my dentist is always apologizing for doing his job. I am just happy to find a good dentist. If he wants to say "Thank You" and "Sorry" all the time, it's fine. Maybe I am just an easy patient, I don't know.

Turkey Day in 2 days! Does everyone have the menu nailed down? I don't! I'd better get on that...
Labels: dogs health home improvement running