Before leaving for the wineries this afternoon, we discussed whether we should close the downstairs windows. Really, I was worried someone could cut the screen and just come in but the Husband stated that if someone wanted to come in they would just break the window since they are hardly sturdy windows (after 20 years, they are probably in need of replacement...). So, we leave them open.

We put Nikki outside with her water and a treat and off we went. Fast forward 5 hours later, we come home to find Nikki inside the house. How in the hell did she get in? 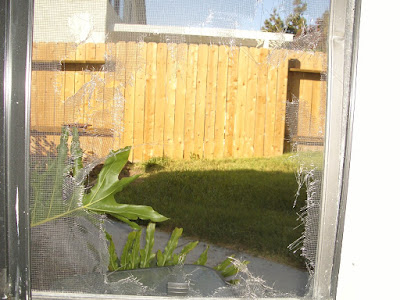 Miss Nikki, all 25 pounds of her, managed to tear a massive hole in the screen. Think she's bored at all? Looks like she jumped onto that little table that was out by the window and just went to town. She tried the other window, but that didn't work out as well. 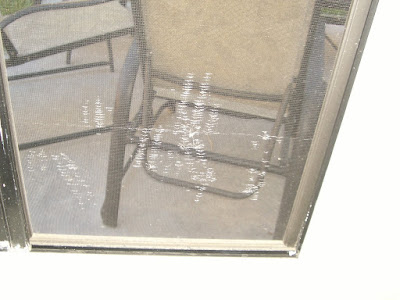 Yeah, I thought that one dog would be easier that two. Hmm. Yeah. Maybe not so much.

So I am rethinking the idea of a second dog. Sure, it's more work but if I can avoid this kind of Houdini-style tricks she is teaching herself, it might be worth it.
Labels: dogs