My Plate Wall will not Suck

To say I had a long day yesterday would be an understatement. I was most certainly zombie-like parts of the day to the point where if someone was talking to me, pieces of the conversation would be immediately forgotten seconds after the words were spoken. It was like every 3rd word wouldn't register as a language I understood. Luckily I was able to stay focused during meetings and conversations that were materially important to my job, but otherwise, I was inches away from being non-functional. The trouble was that I got maybe 3 hours of sleep on Tuesday night due to my idiocy and irrational desire to watch the 10pm Bachelorette "After the Final Rose" (which, by the way, turned out to be much higher on the bo-ring scale than I expected), and the fact that the husband got home sometime around 11pm, AND the fact that I had drank two Diet Pepsis after the hour of 8pm. DUMB. All resulted in me falling asleep somewhere around 1am (how much does it suck when you toss and turn for hours knowing you have to get up at some un-Godly hour?) and getting up at 4am to catch the ass-crack of dawn flight. Meanwhile Monday night I got maybe 4 hours of sleep, so 7 hours of sleep across 72 hours. Yeah. Umm, No. I got home around 9pm last night slept 8-9 hours so at least I am feeling more Human and less Creature of the Living Dead today.

The Husband, rightfully so, hijacked the camera while he was away in the boondocks of Pennsylvania so I have no photos yet to show you of the 3 plates I hung on the wall in the kitchen. I think they look cute but, not surprisingly, it's one of the first things the Husband noticed (like maybe 5 minutes after he'd walked through the door), and criticized that it's like he's in his grandma's house. Pfffheh. I wonder what he's going to think about my plan to begin a mondo-huge plate collage that will crawl up our staircase wall. I cruised around Flickr this past weekend for plate walls, and found much inspiration. So many cool ones. One in particular, caught my eye - a staircase wall that is pretty fabulous. I didn't know what to do with that area in my house and when I saw her photos, that was it. 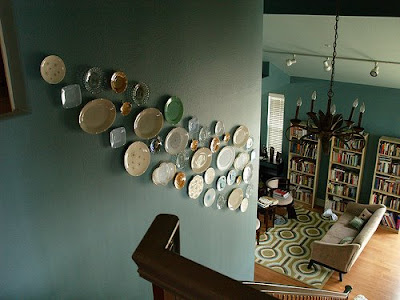 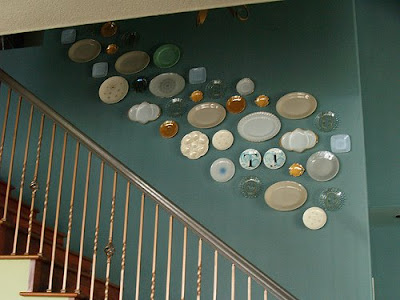 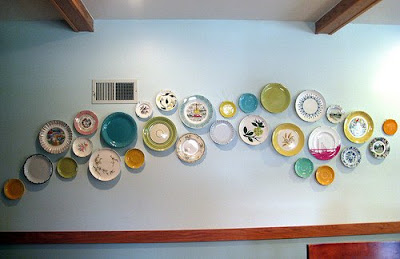 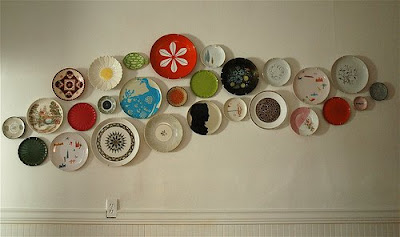 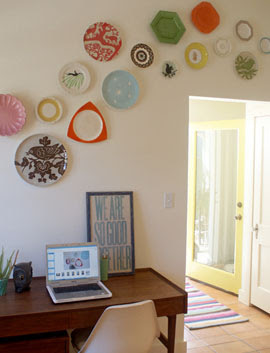 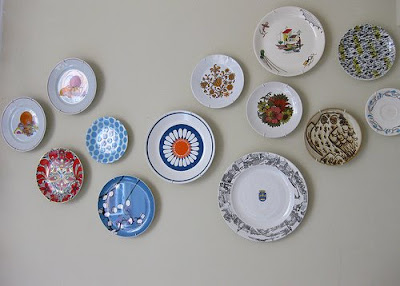 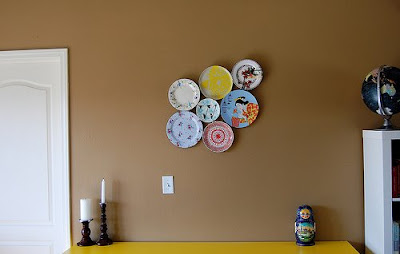 From Our Little Corner of the World via Flickr
I'll need somewhere between 20-40 plates - right now I have 8 or so. I picked up 4 this weekend (and 3 more Monday evening) when I hit up some thrift stores in the area. My plan is to start hunting garage sales on Friday mornings on my way into the office. I am hoping that some of the 55+ communities in the area will have some estate sales in the next few months - I figure if anyone has cool vintage plates, it'll be the older ladies in retirement communities. I just hope they are estate sales related to moving and not because they Bought the Farm. My intention is not to capitalize on elderly folks' propensity to die more frequently then their younger counterparts. Not that one can die more than once, because I just read that sentence over and it sounds like I am saying an old person dies frequently. Really, it's that a retirement community likely has higher death rates. Man, I should stop now before my toes are poking my spleen. Anyway. I just want some cool antique/vintage plates and I am hoping that older people have more of them to jettison in garage sales.

I did (suprisingly) win an eBay auction for FIVE vintage pastel-colored platters. I didn't think I would get it but I put my bid in before I left for the airport and this morning was happy to see that for less than $15 (well, $26 including shipping), I got five LuRay serving platters (made somewhere between 1938 to 1961, should be embossed on the back of the plates). Anybody ever heard of LuRay? I figure I can actually use some of them if I don't end up hanging them all in my plate collage. Hopefully they arrive in intact - that is always a risk when shipping china. I hope the seller has mad packing skillz and uses copious amounts of squishy, fluffy packing materials. 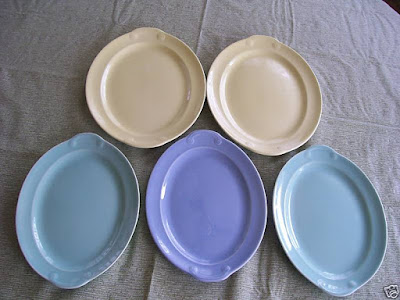