Trials and Tribulations of an 80s Tract House

Another week has passed and another thing has crapped out. Our sliding doors out to the back yard finally shit the bed late last week, after a year of sub-par performance. They are original to the house - 1987 - so I am not surprised. For about a year, the rollers had been shot and no amount of WD-40 could fix the situation. In order to close the door we would take the handle, lift up, and then jack-hammer-motion it shut (if I'm in a particularly terse mood, I end up cursing at the door "I f**king hate this door! We have to replace it, already!! @#!!$%*(&@#$!!"). This practice finally broke the handle, so now only one of the screws on the handle is attached. This is a security issue - if the last screw fails, our house is basically open. Sure, I could just replace the handle, but the rollers are still broken and the door itself is drafty as all heck. For now, I have a 3-ft remnant of an IKEA cabinet that sits in the track so the door won't open unless you move the wood. I know, totally ghetto.

Home Depot charges $600 to install a new set of doors. High Five. While we have no experience replacing patio doors, $600 is more than the unit costs (in fact, it's twice the price of some models) and for a day's worth of work, that is a whole lot of money. So we will be embarking on this task ourselves. Generally, I can't say I like sliding glass doors for patio egress. They kind of annoy me because they take up 6 feet of wall, yet only open just under 3 feet. Not to mention that the rollers lose their mojo after a while. The one thing that could be good about a slider, though, is that Jeldwen makes a retrofit frame model, so you can leave the existing aluminum frame in (thereby not having to disturb the stucco on the house) and the slip the new door in. They're not cheap, though - according to the dude I talked to this morning, they run about $800. They happen to have one in stock from a customer return that is priced at $500, so that is a good deal. But it's still a sliding glass door and I have already told you how I feel about them. Nevermind the aggravation of blinds and windows treatments with sliding glass doors. At least with french doors you can affix blindes/roman shades/curtains to the door itself.

The other options are a little harier to install, but hardly rocket science. We'll have to cut the frame out with either an angle saw, or a reciprocating saw, trying our best not to disturb the stucco. Then the process is the same as the retrofit (leveling, lots of silicone, screws into the rough frame on the sides).

I have seen two good options at the Depot (who, by the way, always offers 6 months 0% financing on stuff over $299). 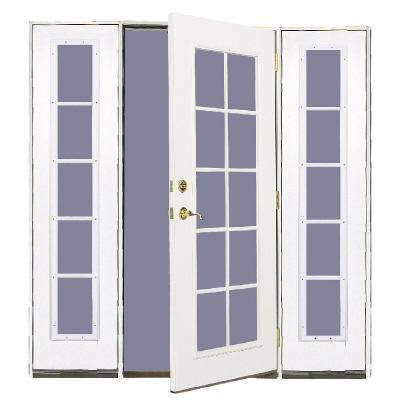 This one, I like because it has two little transom-type windows on the sides with screens, which is great for getting a nice breeze without having to open the main middle door. And I can easily add a screen to the main door that won't cost my right arm. The downside is that there is only one door you can open. Basically, this option is great for getting a breeze without letting critters into the house. Cost for this guy is $559, and I believe the screens are $70 (it said "additional options" were $70, and my guess is that it's the screens). Total $629. 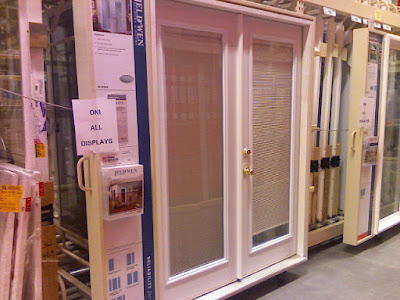 (above pic five-finger-discounted from some dude on flickr)
The other option I spied this morning was the more standard french door style, but it has built-in blinds. Great for energy savings! And I can open up both doors. However, the major downside is adding a screen to this type of configuration isn't cheap. The only screens that generally work with a double door are those roll-up ones that you pull in from the sides. Those cost a pretty penny: $129 each side, so $260 for the screens. Yeah. I didn't write down the price of the door, but the number I see in my head is $599. So this second option costs $860.

Factoring costs alone, I think the first one makes sense. I can't say I'm so head over heels for number 2 that I'd fork over an additional $230.

Also, in case any readers out there own an older house (older meaning built before 1990) and are thinking that they might need new windows some time in the not so distant future, this is the year to do it, if you have the means. The government has reinstated the 2007 energy efficiency home improvement tax credits for the year 2009. There's a whole slew of options, but, basically, for energy efficient exterior doors, it's 10% of total cost, maximum of $500, and windows, again 10% but only up to $200.

Oh, and the car? Another noise has started up (or maybe was there before, but was being drowned out by the front brakes noise) and it sounds like it's coming from the back wheels. Similar metal rubbing sound. Guess I'll be at the mechanic again this weekend. I'll bet, when all is said and done, I will have spent at least $500 on brakes maintenance.
Labels: cars crapped out home improvement