Holy Student Loans, already. I never expected to be nearing 30 and still have over 10 grand in student loans left to pay off. It's a little ridiculous. I mean, I guess I should consider that I had 20K to start with so I've paid of like 9K in 7 years. But I feel like I'll be 40 and still paying student loans. I cannot imagine how people stuck with like 50-100K of student loans feel. They must feel absolutely crippled - how can you buy a house if you owe $75,000 in student loans? So I guess I am thankful for only having to borrow 20K, but it is certainly getting old. My plan is to kick up the payment amount once my smaller Perkins loan is paid off in a few months, but not done until 38 years old if I keep the same payments? Why in God's name did they give me a 15-year term and why did I agree to it? Sallie Mae sucks and my 22-year-old self was still a financial dumbass.

Back to His Clingy Self

Well, Friday morning, Rusty was still in pretty rough shape - I cleaned him up with hydrogen peroxide, gave him his antibiotic and went to work. L came home to find him bounding down the back slope, satellite dish bouncing around, knocking into things. The meds must have kicked in because Rusty is back to his velcro self. I'm happy he's feeling better but he is all-kinds of annoying again. It's just who he is. He follows you around, stuck to your left leg. Walks behind you, steps on the back of your flip flops (I have nearly face-planted several times because of this dog), steps on your feet, slobbers all over your clothes, blocks doorways because he wants to know your next move so he can be RIGHTNEXTTOYOU.

Yes, Rusty is back in the hiz-ouse. I suppose there is still the chance he has tumors or whatever else bad in his feet, but I am feeling more positive about the old man's prospects.

Am I the only person in America under 30 without a MySpace page? I'm beginning to feel like the old fart who is falling out of touch with technology and society. Soon I won't know how to work the TV remotes.

Apparently, I am missing out on all kinds of opportunities to stalk former high school classmates. And I have to admit, I have internet stalking tendencies. So, I am intrigued by the idea. I have avoided the whole thing mostly because I wanted to be kind of "anti-establishment", if that makes any sense. I mean, high school was tolerable but I was not into the clique-ishness and I almost feel like MySpace has that vibe with the "friends" and getting "accepted" as a friend. It's like residual high school rejection fear or something. But the reality is, like 80% of my classmates from high school still live in the same town (a town that I would file in the top 5 worst cities in Massachusetts in terms of crime and poverty) so I can't really feel that much inadequacy. But I still do. Doh!

But I probably will still create a stupid MySpace page because the draw of being able to stalk is so much stronger than my high school fear of rejection by the cool crowd :0) I have problems.

I used to say that my favorite animal (other than the common canine) was the monkey -- any creature in the moneky family. But the meerkat just might be tied with the monkey. At the San Diego Zoo (which is an excellent zoo - it is massive), they have a meerkat habitat where you are literally 5-7 feet from them, out in the open. Someone with a long arm might be able reach out and touch them. And these meerkats are attention whores. They LOVE to just stand up on their hind legs and and take glamour shots for the camera. 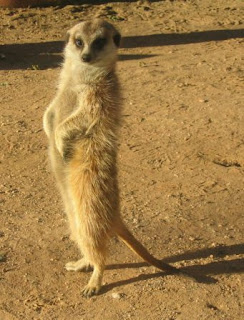 I love them. I would have a pet meerkat if I could. Carry it around like those airhead celebs do in a little bag except I would be so much cooler because I would have a MEERKAT. They would all be jealous.

And the gorillas were pretty great as well. One young male was all about putting on a show for everyone. He was wrestling with his little brother, smiling and standing up and rapping on the windows at all the people watching, running around, bopping other gorillas on the head and arms. He even did a drive by whap on the head of the big silverback (the head honcho gorilla), which was ballsy, because the silverback was huge. They really have lot of human-like qualities. But I couldn't help feeling some sadness because it reminded me that they are being massacred in the Congo. I swear, if I could, I would take the killers of these majestic animals by the balls and turn them upside down like pinatas, spin them around by their scrotums. I sure hope there is karma in the world, because these people are despicable.
Labels: cashola dogs etc internet