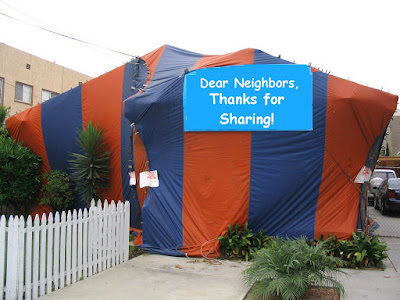 Or termites.
I cannot say I'm surprised because I have seen no less than 4 tents in the neighborhood in the last 6 months. Which means all the surviving termites were forced to find a new house to crash each time. Be warned: If you see a tent go up your block, it's just a matter of time before you'll be tenting, too.
What I thought was termites in my floor (and now I have to replace the t-molding the dude ripped up and broke which is a bonus pain in the crack), is actually termites eating the wood beam in the vaulted ceiling and the "frass" - pest terminology for "crap" - has been raining down on the floor. Sweet! And he found two other spots in the house. I don't think that "making it rain" should involve poo, but because making it rain with dollars never happens except in rap songs, the alternative in my life is making it rain with insect shit.
Sooooo. That means the best option is to tent. You know what's funny? Or not so much? I just got a chunk of shares vest (like 4 days ago - the sell order hasn't even settled yet) from my job which was nice - and I was thinking that it would be my master shower remodel budget or finishing the windows. Now? Nearly half is going to pay for this. Tenting alone is $1900. If they have to replace boards along the roof, it'll be another $700-800. Did I mention The Huz is still unemployed? Yeah.
Oh, and happy birthday to me. Literally and figuratively.
Labels: california cashola house kvetch-ing pests WTF