...I did not take my chair apart this weekend. It was kind of my birthday weekend so the first thing on my mind was not tackling major projects. Plus, there's the subject of termites - yes, those munchy bastards - that are eating the walnut t-molding that I just installed a few months back in the room where the chair it sitting. So I don't want to touch anything in there, related to termites or not. I don't know what's going to go down with the floor. The pest people are coming this evening to confirm my suspicion and hopefully have a good remedy. One of the lovely things you have to deal with as a homeowner in coastal California. Effing termites.
I did make progess on minor projects, though...
First off, the patio door is officially done. Check! It ain't perfect, I'm not gonna lie. But you do't really notice the imperfections until you're up close and inspecting. 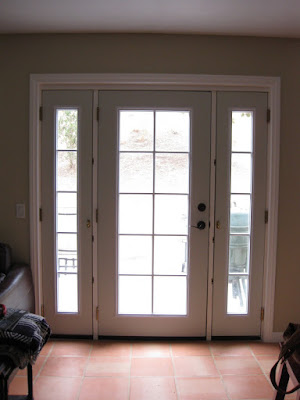 The reason it took so long was the door was slighly recessed into the wall due to the fact that the outside brick molding is meant to be flush with the stucco (at least that's my conclusion). We did not install it that way. Rather than cut away stucco which could result in having to do lots of tedious patching we installed it so the brick molding rested on top of the stucco (then silicone caulked the gap). The result on the inside was about 1.5 inches of distance to make up to get to the drywall (which also had to be patched in order to remove pesky aluminum bracket thingies that were there for some drywall purpose which I have determined to be stupid and non-essential). I used some stock molding from Lowe's to get closer to the drywall and ended up with about 3/8"+ gap between that and the casing. That is where backer rod comes in (which turns out is just a tube-shaped foam - I always thought it was something way more sophisticated and scary). I shoved that into the gap and had to do other annoying botchery maneuvers to double it up where the gap was just a bit too large, then caulked. That's where the imperfections are - where the gap was larger than 3/8" and I had to do weird McGruber stuff. Eh. 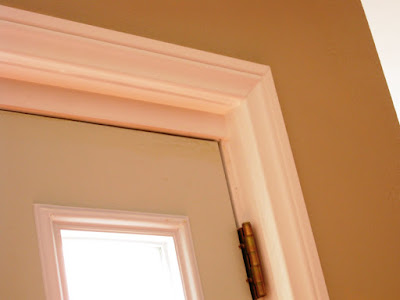 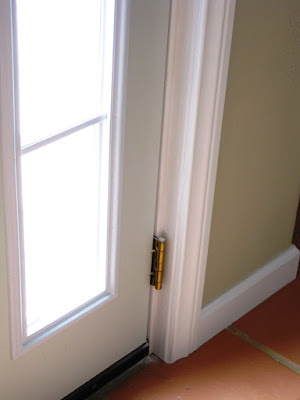 I also completed this thing and I haven't found a home for it in the house yet: 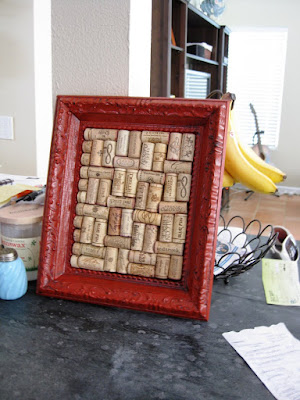 The frame was 25 cents at a rummage sale at the local Women's Club (i.e. Old Lady Club) which was just insanely cheap (I bought a slew of frames, a painting, and two dishes there for a total of $3.25. I swear I felt like I was stealing it was so cheap). I spray painted it Rustoleum's "Paprika", then used antiquing glaze from Lowe's, and final coat of spray poly. The corks are from a healthy wine habit (this only used up around 40-ish corks - about third of our cork stash). I finished it this morning.
And the other thing I did was frame out and install drywall over the hole where the downstairs bath medicine cabinet used to be. I had the Huz remove it last week (which he did under slight protest because he doesn't understand why I would be removing it but it just has to go). Over the week, I'll be floating. Small progress in downstairs bath - baby steps.
Labels: home improvement house kvetch-ing