I am trying to motivate myself to sand the damn stools and get on with the antiquing (lovely stuff from Lowes, called Antiquing Glaze) but I seem to just keep sitting here eating Parmesan and Garlic Pita Chips and drinking Nero d'Avola. I am telling you, working out in the evening is a much better appetite suppressant than TV and blogging. I need to get on doing that more often. Anyway.

Sooooo. The company I blogged about last post has checked my references (which they, apparently, they only do when they are going to present an offer), and I have one last hoop to jump through which is lunch with the Senior Manager of the group (who is on vacation so it won't happen until Tuesday of next week). Generally, I am a genial person, though I can't seem to stop thinking up of ways I could totally screw it up like showing up in flip flops, or pasties, using the f-bomb in conversation, or, I don't know, ordering shots of Tequila and getting wasted. Which obviously I'd never do any of these things, but my mind is stupid like that. Nevermind the stress of a one-on-one lunch with a manager who is, essentially, deciding whether I get an offer or not. Baaahh! I have never jumped through this many hoops to get a job except maybe when I was interviewing with the Big 5 (Andersen, Ernst & Young, PWC, etc) when I was in college. And that was generally accepted to have to go through a long, drawn-out courting process.

The Husband had an interview yesterday (finally!), except the commute is like 50 miles and the money is 20K less that he used to make. Yeah. It's like a 30% pay cut. But I suppose it's better than nothing - I'm kind of hoping he gets it because construction is in the shitter and I think it would take another miracle of sorts for him to get even another interview. So, who knows, yes, our income will go down like 20% or so but at least we'll be 100% employed. Trying not to think about the insane mileage that would be put on the new car. Trying. Not really working.

Onto house b*llsh*t. Can you tell I've been drinking some vino rosso? I've finished two stools, and, really, I think they look pretty snazzy. Here's a juxtaposition of the stool before and after. 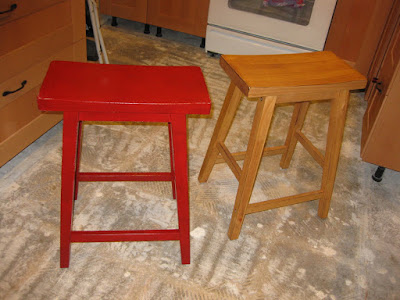 Anywho, that's all I got for you folks, for now. At least my laptop is home to stay (my contract job FINALLY got me a laptop).
Labels: cashola economy home improvement