Two things I realized while running this race Sunday:

Saturday evening I found that my left calf was extremely whiney. I sticked it, massaged it with sports cream, stretched it,  compressed it, etc. Woke up and it was still tender to the touch. But I had paid more than $80 to do the Menifee Half so I couldn’t bring myself to eat the fee.The race started at 8am which, in May, is never a good idea, but it did allow me to leave as late as 6:15am and still get there before 7am.

Parking and bib pick up was very easy – it was a small race. 125 people in the half marathon. I did a little warm up to test the calf and it wasn’t too bad. But at 7am it was already nearly 70 degrees so I knew heat was going to be a factor. Everyone gathered behind the start line around 7:50am and we were off at 8am, right on schedule. 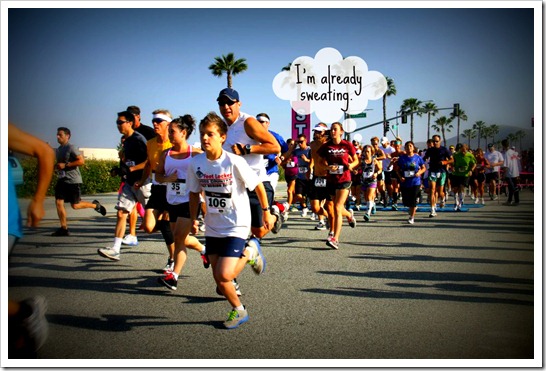 After 18 years of running and racing, I have gotten much better at going out easy and working the negative split. So I ran the first few miles on feel. Garmin beeped for mile 1 at 8:04. This a bit slower than I would have expected given the 7:53 pace I ran at PCRF. Mile 2, 8:06. I could already feel the heat which is probably why my “running on feel” was resulting in low 8:00’s rather than high 7:00’s. Mile 3… 8:10.

At that point, I was pretty aware I wasn’t even going to come close to a PR.

We turned onto Garboni Rd and I made another realization. This course was “California Flat” which is not really flat. But flat out here is relative given how hilly OC, Inland Empire, and San Diego are.

Trudging up the long gradual hill, I experienced by first ever urge to legitimately drop out of a race. It was easily over 70F at this point. A PR was pretty far out of reach, and even attempting to come close to it would probably be incredibly painful with the heat and leave me feeling pretty gross and awful the rest of the day. But I’ve never DNF’d in my entire life. And without a real injury, I could not come up with a good reason to just give up.

So I made the decision I was going to finish this pain in the ass race, but run it just a smidge faster than a training run. That wouldn’t destroy my legs or leave me dealing with heat sickness the rest of the day (which, by the way, I didn’t really avoid altogether. I felt much worse after this “race” than PCRF). I had skipped the first water stop, but since I was no longer “racing” I was going to stop at each station and pour water on neck and head to deal with the heat. The other kicker about this course is there is no shade. None. It’s pretty much rural roads without trees.

We turned north and cruised downhill. At the next water stop around 5.5 miles I grabbed another cup, threw it on myself and took a right, passing a dude who decided I would be his Garmin Sherpa. His had died and apparently he was having some issues finding a reasonable pace with the heat so his new plan was to pace me. I was glad to have the company! We chatted about running, ultras, Ragnar (his ultra team had to DNF due to a drop out during the race), triathlons, his ironman training, etc. During this time I was also exceedingly whiny about how I was running 8-10 minutes slower than just two weeks ago. Hopefully I wasn’t too annoying.

Shortly before mile 9, we caught up with the maroon-shirt girl in the first photo. I told her “Good Job!” as we passed and she asked me what mile we were at. I obliged as apparently I was the only person in the vicinity with a working Garmin. We hit every water stop and threw water on ourselves. Honestly, there is a very good chance I would have walked at this point because I had really given up on salvaging any part of this race, but having someone running with me totally kept me going. I felt like I had to keep running.

With two miles to go, I heard someone yell out to me “How many miles!?” It was our young maroon-shirted friend who was following behind us.

At this point, I had exhausted my 21 ounces of gatorade, and was drinking water from the stops. It had to be close to 80F. The last 2 miles were hot and uncomfortable. But we still picked up the pace a bit. Around the last quarter mile, the girl behind cruised past us. I again, told her “Good Job!” because I honestly didn’t care about if she dropped me down another notch in the gender placement. Kicking it in just a bit more, we crossed, gun time 1:52:37. My running friend, never mentioning it the whole time we were running together, had a nearly 20 minute PR. Holy crap! I felt good that I was at least somewhat helpful in that achievement (aside from my bitching and moaning about how slow I was going compared to two weeks ago). 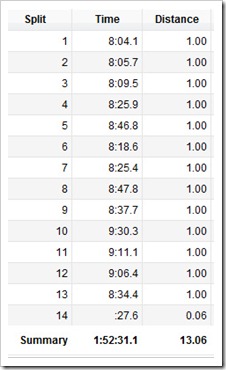 Even after giving up 3 miles in, I was still the 8th woman out of 49, and 1st in my age group (out of 9), thanks to the fact that it was a small race. Even my running buddy got 2nd in his age group. 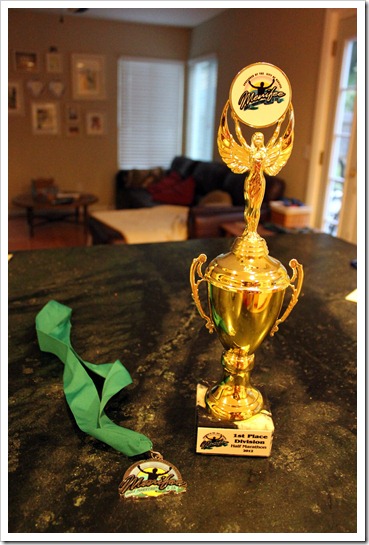 When I left Menifee around 11am, it was 92 degrees! The race directors were very receptive to our comments/suggestions and said that next year, it would start at 6am (holy earliness – but still better than running in the heat). I got home and passed out on the couch for several hours. I can honestly say that had I pushed it any harder during the race, I would have been 100% useless the rest of the day, and possibly sick. Overall, I’m glad I decided to take it easier. There will be other races to run faster. And I got to make some running friends rather than be miserable and alone for 13 miles!