So yeah. At exchange 33, my mood went from complete dejection to slight hopefulness at the sight of shiny, sparkly skirts who, it appears had just  handed off or were about to. Clearly I was not the only one that had a rough go of it that afternoon. We would later find out that one of their runners had gotten lost on leg 33 because of downed signage (which is unfortunate,but this is part of running relays. Happened to our 12-man team, in fact).

Pam came in from her 11 miles and threw her hydration belt at us; Nicole ran to catch her to see if she wanted to pound the rest of her water bottle. Turned out she did. And then she took off and we drove to the next exchange. She was so in the zone and focused that when we cheered for her as we passed she could only give us her signature peace sign and not even look at the van.

As we waiting at exchange 34 to send off our anchor, Nicole, a group of women in pink tutus swarms SarahOUaL’s husband and asks if he’ll take a picture of them so they have a shot with a “hot guy.” So weird and kind of rude (perhaps they didn’t know he was her husband, so I give them the benefit of the doubt there). However, later, when we are waiting for Nicole to come in at the finish, this same group just prances in between a group of 3 of us chatting. Twice. Rudely. I was not a fan of these ladies (I was a fan of the fact that 6 of us beat 12 of them by 2 hours).

Pam hands off to Nicole who has 11+ miles to complete. While Nicole had just under 30 miles to complete which was relatively low compared to Sarah’s 42, she was stuck waiting for hours. We had been roaming around three counties since early Friday morning and now it was Saturday late afternoon. No sleep. Crappy nutrition. Everyone else is done.

Anchor runner sucks, is what I’m saying. Especially in an ultra relay.

She told us she didn’t need us to stop for her at the mid-point exchange so we go straight to the finish. And commence freaking out when we see, around 5pm, that Team Sparkle appeared to have already finished, and Nicole had just texted me she has 6 miles left and was dying. We didn’t know if Team Sparkle had finished 30 minutes prior, 10 minutes prior, or just minutes before we saw them.

Mason tries to talk sense into us that Nicole has something ridiculous like 90 minutes to complete 6 miles but we were stupid tired and didn’t understand logical arguments. Freaking out and fuzzy math resumes.

I distract myself by talking to SMCOL 12-man team and soon I get a text that she is 1 mile out. She comes running  up to the beach path tired, exhausted, and looking for her team. Unfortunately we were situated closer to the tail end of the waiting teams. We run her in, but have some “Faster Bunny Complications”. Margot had tried to run barefoot, but then that didn’t work on concrete, so we paused while she got her flip-flops on as she screamed at Nicole to “just go” because, as I said earlier, we were thought we were impossibly close to losing (or winning) first place. So we were concerned about milliseconds at that point. But we wait anyway, and then Margot starts running again but is running with her flip-flops sideways once she hits the sand. We were a sight, our team. We didn’t care about the picture. Just saving the seconds!

Trickling across the finish line: 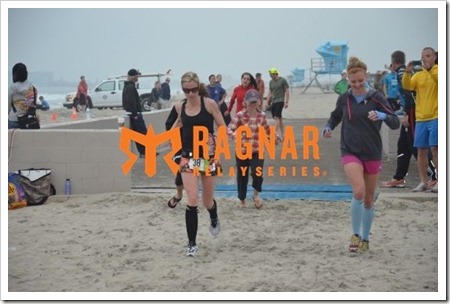 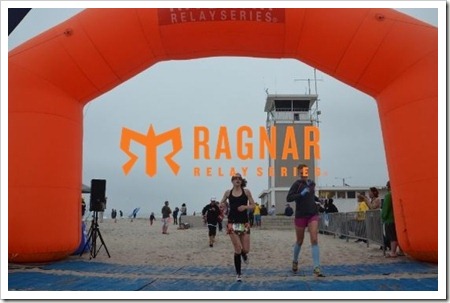 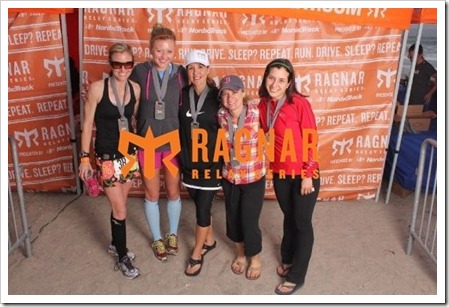 About 24 hours later, we learned from Gemini Timing that we came in first by about 16 minutes. In a 200+ mile relay, that is pretty damn close. But close only counts in horseshoes and hand grenades (and also bocci and curling, but whatever).

Did we run slower than we hoped? Absolutely. But, for me, this was much harder than a marathon. My performance was way more unpredictable with the heat, the lack of sleep, etc. The 12-man is an effing walk in the park in comparison to the 6-man. But we still killed it.. Second all-womens team, first all womens’ ultra, 5th ultra out of 28 teams.

Some Final Thoughts On My Van Mates

I spent 30+ hours with these ladies and I feel like I know them all infinitely more than I did before.

Sarah OUAL: Turns out this girl does really well with little sleep. Like drives a huge-ass van like a champ at 3am, pounds out speedy miles, and did not look like death at any point. Pretty impressive. And was positive and cheery the whole time.

Margot: She is my nerd-buddy. I hope, Margot, you realize this is a compliment. We both like to slay us some SATs. And she has the absent-minded professor vibe which cracks me up. She reminds me of my high school XC/track buddies.

Nicole: It’s no wonder she has a pretty high-stress, high-responsibility job. She handled the lack of sleep, the fact that she was stuck as anchor watching all of us finish our legs, better than any of us. I needed Nicole in that van.

Pam: Man, Pam got zero sleep and while she got quieter as we got closer to finishing she is like Nicole. Mentally tough. She is truly, a sweet/good person and super humble.

Sarah (SR): I leave her for last because I have a bit more to say. GOMI talks a lot of shit about her. And prior to Ragnar, I hadn’t spent any appreciable time with her, knew very little about her as a person, and approached her with some skepticism (I despise Fox News, we are polar opposites from a political standpoint, we both grew up in very different socioeconomic situations, I am not religious, etc). Turns out she is super humble, very supportive, and was an awesome van mate. She was instrumental in getting me through my meltdown in leg 3.

Would I do a 6-man again? At this point, almost two weeks out, the answer is still no. I much prefer the “easy” 12-man relay. And if I want to do an ultra, I’d rather do a 50K or 50 miler on my own without the pressure of letting 5 other people down, other than myself! But I’m glad I did it and I’m extra glad we won!

Obligatory Shout out to Our Sponsors

BIC Bands (Sandy from BIC Bands was on the 12-man and she is super cool. And the bands, truly, do not move and are great)