Snow Canyon Half Marathon: A PR You’ll Pay For…

…in the form of ridiculously sore quads, calves, and achilles. Would I do it again? Yes. Does it feel like cheating? Kind of.

I have failed to download my splits as of late, and rather than put of writing up my little blog post about it just to have my mile splits up, I am just doing it. ([in Govenor Aaaahnold accent] “Ya. Just do it. Pump da ion.”) I do remember though that miles 12 and 13 were a miserable experience with 9:02 and 9:07 miles. Miles 1,9, 10, and 11, were in the 8’s. Mile 2,3,4,5,6,7, and 8 were in the 7’s thanks to the downhill. But if you don’t train for the downhill? It’ll bite you in the ass. For me around mile 11 or so, my legs started questioning why they were still attached to my body seeing as I was beating the living hell out of them. For the first time since Surf City in Feb, I took 3 walking breaks. Albeit, very short – like 10-20 seconds each, but I was hurting. So while you might get a fast time and a PR doing a downhill race, it is not necessarily easy. And I was sore through Wednesday. I still have some lingering soreness in my calves and achilles. Knees faired surprisingly well. Maybe because my quads and calves took the brunt of it.

I ended up finishing 1:47:18 which was entirely unexpected. Could I do this on a regular course? I’m not so sure. I think I can probably break 1:50:00 on a good day on a normal course, but not sure about the 1:47’s. Which is why I feel like it’s kind of cheating. But in my future quest to BQ who knows how many years from now, you can bet your butt it’ll be at the St. George Marathon.  I need all the help I can get. 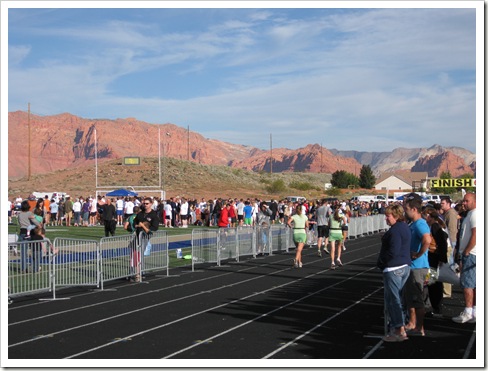 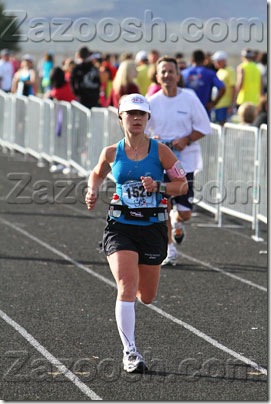 I really liked this race. It was very cheap ($35), you get a cheesy little medal and technical tee (which is too big for me) but for that price point, you can’t  expect Rock ‘n Roll quality medals/tees. It was well-organized with the busses but could have used more porta-potties at the start (I was on the first bus up the mountain so I avoided the potty line entirely). The scenery is beautiful and interesting and it entirely paved. There was lots of food goodies at the finish, the runners in Utah were super-nice and friendly, it was chip-timed, there was GU (which I didn’t use but some people rely on the race having it), etc. For the money, you can’t really beat it. It was also interesting running with the Southern Utah locals who are clearly accustomed to running downhill. They would fly past me on the down and the second we would hit an incline (and there were some ups), they would slow down to like 10:00+ pace and I would trot by only to be passed on the down again.

After the race we drove over to Zion National Park and camped at the Watchman Campground for two nights. 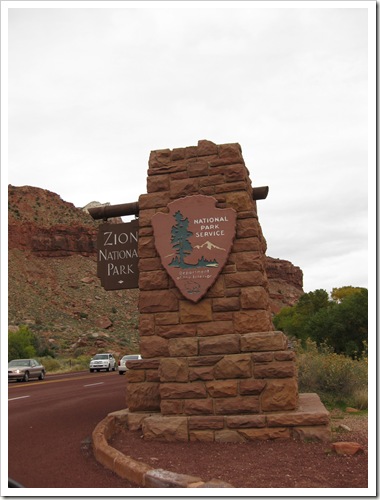 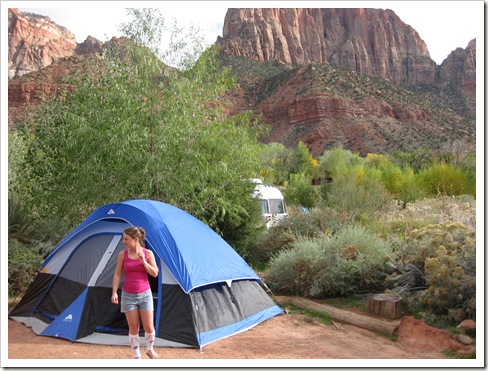 (Still wearing my compression sleeves in a futile attempt to reduce the upcoming soreness. I walked around like Frankenstein (“Puttin’ on the RITZ!!!”) all of Monday)

The park is awesome and way better than I expected. I wish we had a couple more days there. We will have to go back for sure, because the hikes were beautiful and totally doable in a day. And we had three fawns that stumbled into the bushes of our campsite chewing on vegetation who seemed as freaked out to see us as we did them. First time I’ve had a wild deer about 10 feet away. 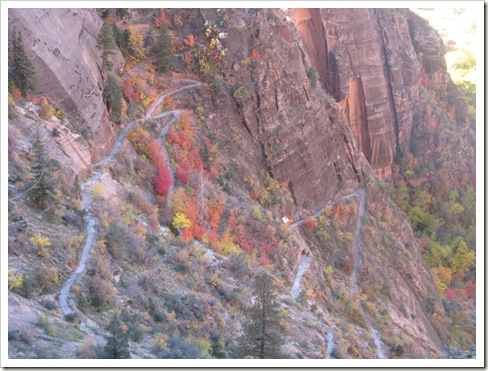 (This is the trail to Observation Point which we did the day after the race. 8 miles round trip, 2148 feet elevation gain. The climb up was fine. The walk down was brutal for me.) 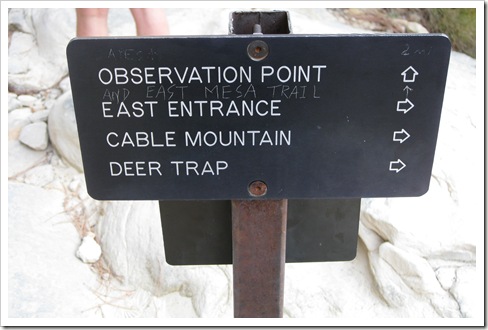 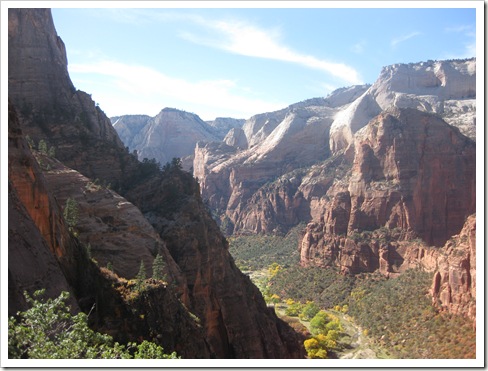 There are only two small bummers about the park: (1) if you camp in the park, there are no showers. You have to buy a shower at another place which has unpublished, irregular hours. So we didn’t shower for more than 48 hours because the place (Zion Rock & Mountain Guide) you could supposedly buy shower time from for $5 from was never open, (2) T-Mobile has no in-network coverage (and possibly other carriers don’t either) so you will be “roaming” and we know what cell roaming does to the wallet.  I realized after I don’t know how many KBs of slow data usage that we were, in-fact, roaming (I had to look at a separate settings screen to figure it out [smacks heel of hand into forehead]).