It's back to the land of work, no spending, and reasonable eating today. The positive is that this week will seem short! We got back around 9:15pm last night - around 4 hours of driving, wine tasting, and eating. I can't believe I have never been to Santa Barbara and I've spent 10 years of my life in Southern California. I can't imagine kids at UCSB get anything done living there. Needless to say (but I'm going to say anyway - isn't that a stupid phrase? Like "no offense" and then you proceed to insult the person), we are going back because I loved it.
One of the downtown tasting rooms we tried, Municipal Wine Something-or-Other, I can't remember: 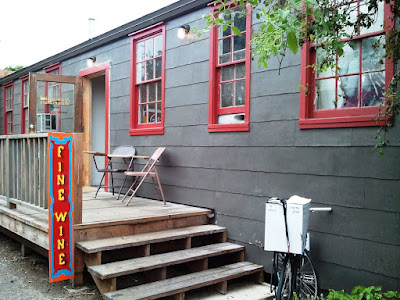 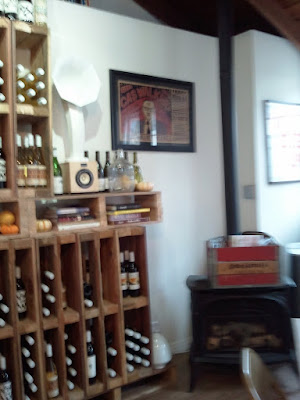 We stayed at a funky place called the Presidio Motel. It was a 60s building on State St they refurbished with a funky, retro, mid-century modern feel. 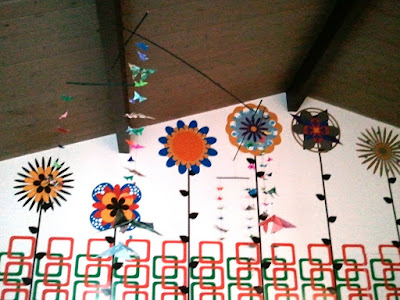 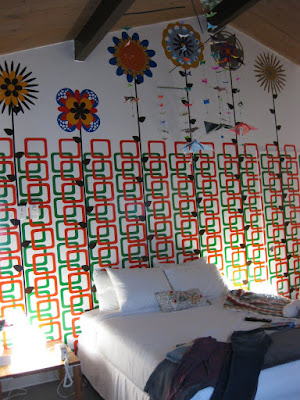 They had complimentary beach cruisers which I was psyched about until I actually tried to ride one. One of those instances were the reality of being short smacks you in the face. The bikes had these little license plates on the back that read "I [heart] Presidio Motel" and it prevented the seat from going all the way down. So rather than killing myself after a few rounds of downtown wine tasting, we decided walking was a much better choice. However, all that walking the first day probably helped my soreness from the race...
The Race! Yes, Sunday morning I did a little ditty of 13.1 miles through fields of red peppers, squash, pumpkin, and manure. First time I've ever run with the smell of manure in my nose. Luckily it was only a small stretch of mile 5. I still have some soreness today but it isn't bad. I'm surprised at how easily I'm recovering from this one. Here is a an action shot the Huz snapped as I labored across the finish line about to reach for my Garmin's stop button (the time on the clock was from the 5K - the clock was all over the place with different times throughout the morning). 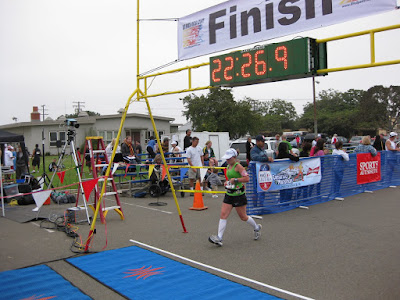 Like my knee socks? CEP calf/shin compression sleeves. I broke many a cardinal race rule, including trying several new things like those sleeves. They worked out great, though. I also tried Clif Blok Margarita flavor with "Cramp Buster" (3 times the sodium). These also were good. The one thing that didn't work out so well was the Gatorade. Normally I mix my own using the powder because I am cheap, and I must be mixing it weak because I bought a bottle of pre-made stuff (since we were travelling for this race) and Holy Sweetness, Batman. My stomach was so queasy at the end I was cursing it. I didn't even finish half of what I brought along so not only was I not well hydrated, I was carrying around an additional pound of weight on my belt. Partial Fail on that one.
My time was 1:56:58. The course was actually longer than 13.1. I looked down at my Garmin at 13.1 (wishing I was done) and it was 1:55:something. The final distance I had was 13.26 miles, 8:49 pace. A little long but it seems like they (the race directors) sacrificed the accuracy of the half course in order to have the full marathon course be accurate for Boston qualifier certification (since the two courses merged and finished the last few miles together - shortening the half closer to 13.1 would make the full too close to 26.2 - most certified courses are a tad longer than the prescribed distance). I am pleased with my time - and I'm going to shoot for breaking 1:55 at Long Beach in two weeks.
I also got to meet Her Fastness Skinny Runner. I knew she was going to be there, but figured I wouldn't stalk her unless I just happened upon her by chance. Which was the case when she was 20 feet from me taking a shot of the finish line so I had to say hi while trying not to scare her with my caffeine'd up, race-jittered self. I also probably scared her around mile 12.8 when she was running back from the turn-around and I yelled "Go Skinny Runner!"
My splits were:
The last mile was the toughest. I haven't run longer than 12 miles since Surf City so I was feeling it. However, I never felt like Death Warmed Over which was the case at Surf City. I I can keep the last mile around 8:50 and then get some of those other miles under 8:50, then 1:55 is well within reach for the 17th.
The other thing I realized this morning was that I stole someone's very well used Rayban sunglasses this weekend in Santa Barbara. I feel really bad about it. I was looking in my purse before driving in this morning and saw two pairs of very similar sunglasses and was like "huh?" I have no idea where I took them. Clearly I thought they were mine. If I had an idea of where I picked them up, I'd call but I am at a total loss. I suppose I could call each place we were at this weekend? Kinda seems like overkill. But maybe someone is really missing them. I'd have to mail them since there is no way I'm driving 3 hours north to deliver them. And what if they were also tourists and not at all local? Blurgh. I am now a sunglass snatcher.
Labels: california running travel