Well, not completely unattached. But training for Ragnar is so fundamentally weird and nebulous, that it’s not even clear that a long run is good enough. It’s like taking echinacea for a cold. You’re sort of skeptical it’s really doing anything. But you take it anyway.

I have to say that, without the long run being directly related to a marathon or at least a half marathon race, it sort of lost it’s appeal for me. But again, I felt I needed to do it. So I planned 18 miles. The longest I ran previously was 14.5 miles 3 weeks ago. Then then 26.2 six weeks ago RnR New Orleans.

I decided that it would be more… interesting… if I ran from home rather than my usual drive-to-the-pier-and-run-coast-highway. By the way, I live 7+ miles inland. For you land-locked folks, I know this is nothing. Laughable. But in my entire lifetime, I’ve lived within 5 miles of the coast (Lake Elsinore was the most land-locked place I’ve ever lived. Thirty miles inland as the crow flies  - but in a valley so that in the summer you fried your tuckus off with 105 degrees). 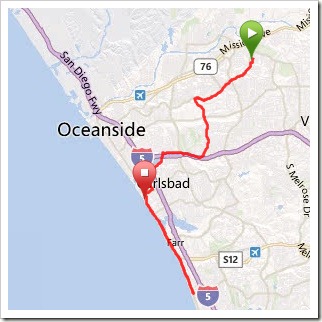 I figured there were some hills I would have to deal with but the net would be downhill, so, score!

Yeah, not so much.  Turns out it was only a net 60 feet downhill.

That first hill, I do 2-3 times a week, so it was NBD. But those  peaks in miles 3-5? Yeah, thank God they were in the first part of the run. They were steep like the Hot Chocolate 15K. In fact, frankly, they were worse. I’m quite certain they make up the majority of the 1173 feet I climbed over 18 miles. So the first third of the run was painful. I was then thankful that Margot did not take me up on my offer to take her very hilly Runner #3 legs.

I also broke the law today when my planned route had a construction closure with concrete barricades that I decided I would ignore and sneak around. The Long Run makes even the biggest Goodie Two Shoes Rule Follower throw caution to the wind. I ran by a big Catepillar thingy-monster-machine and  a huge trench (i.e. 10 feet deep? more?)  in the road on Jefferson Dr to get to downtown Carlsbad. It was maybe 800 meters of closed road, so it was worth the rule-breaking. But funnily, I ran much faster in this stretch (runnin’ scurred).

I got to the coast and it was smooth sailing from there. Splits were much better (ahhh, baby rolling hills and cool breezes).

Final stats (mile 1 is my standard run-from-home hill, but mile 4 and 5 were ass-busters): 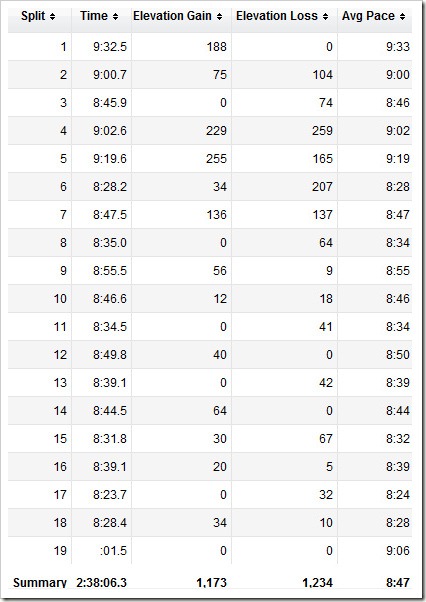 I’m feeling a little more prepared for Ragnar. Pam, who is significantly more bad-ass than myself, swapped runner positions with me (thank you, Pam!!!) so while I have more miles to run (35), I don’t have a 17-mile final leg. I really felt like I was going to let the team down if I had to run that last one and end up at 9:30 pace. I am way more comfortable with a 60+ mpw runner taking it!

Less than two weeks till Go-Time!!!