As of late, I've been all "new millennium" running with folks I met on the internet. Writing that out sounds (a) scary (i.e. stranger-danger), and (b) looser-ish (like I have no other non-internet friends).

Anyway, so I got all 1990's (or 1950's, actually) and signed up with the SDTC (San Diego Track Club, founded in 1954). It's something I had been contemplating for some time, and then when I saw that they were putting on the Cinco de Mayo 5-miler on May 2nd and membership would entitle me to $5 discount, it was enough impetus to jump in (the yearly membership fees are pretty darn low).

Obviously, I didn't sign up just because of that race; they have weekly track workouts in both San Diego proper and North County. I liked the idea of doing track workouts with a legitimate coach. And maybe after a few weeks of being the new girl, I might make some new running friends that might live close to me.

There were quite a few folks when I got there, milling around, some warming up on the outside of the track (in reverse, per "track etiquette"). There were also some crazy fast dudes running laps while the "coach", fully clothed, ran back-and-forth across the field yelling stuff at them. Apparently he is also a super-fast runner (according to another guy I talked to, he is one of a few that are trying to qualify for some Olympic events).

Shortly before 6pm, he got us all together and explained that we'd be doing six to sixteed 300m repeats, with 100m rest. The pace was to be 5K to 10K pace and stressed that we were to run relaxed (which must be his mantra because I heard he teased with it throughout the workout) and not to be in pain (i.e. don't kill yourself). That pain is for the race. Not for the workout. This scored major points with me. I could tell that even though I knew no one, I would still have a good time because I would be getting a well-planned workout from someone who obviously knows how to coach runners. We started with 4 strides, and then off with the 300s!

It was probably good that I had not pre-calculated what time I should be running the 300's otherwise I think I would have been second guessing myself. My mind looked at the splits as I completed them and thought they were slow (turns out that if the intervals are not 400, 800, or 1600, I am incapable of quickly doing the mental math while running fast or recovering). The other runners on the track were all different paces which was cool - I was getting passed and passing others, etc. I was running by myself, but, really, during the intervals everyone pretty much was.

I did all 16. It felt hard, but, well, not THAT hard. I certainly wasn't in pain so hopefully he didn't think I was trying to be an over-achiever by doing them all (since the majority of the folks did not do all 16, likely because they were tapering for Boston, or some other race or something). My average time was 78 seconds which translates to 6:56 pace. Which turns out is faster than my 5K pace. But to me, this just proves that I can run 6:56 pace in a 5K and I will get that stupid sub-22.

During the practice, he was both running himself, and taking photos of the runners, pulling his kids (he had at least two cute little ones) on the outside of the track in a wheeled cart. Dude is full of energy. Seriously, this little adventure in trying something new was 100% worth it. I hope the next time I go turns out just as fun. The key will be making sure I can squeeze it into my post-work schedule with any traffic, later afternoon meetings, etc. 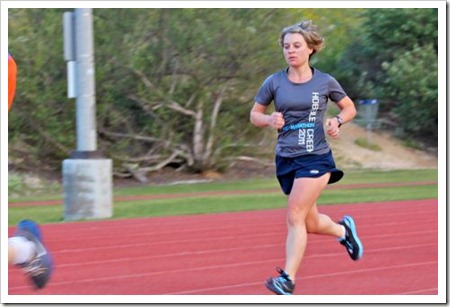 Update! Totally forgot to mention this excellent deal from one of our Ragnar sponsors, ProCompression!