I’m sure this isn’t new to anyone at this point, but, our team won our division. We also came in 2nd among all female teams both 12 and 6-woman. Yeah, that in-and-of-itself blows my mind. If we had run 30 minutes faster we would have been the first all-female team. With only 6. WTF. 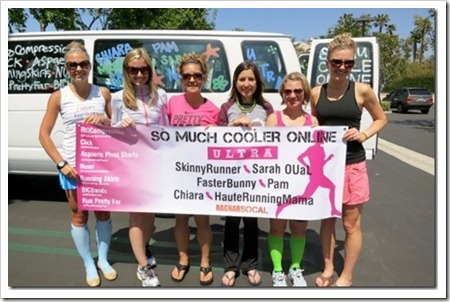 (stolen from SR. Thanks, girl. I’m a shitty blogger)

The theme for me in the last 6-8 months is the realization that my body is not invincible yet still surprising myself with some significant PRs. When I agreed to this Ragnar Ultra thing, I had yet to get sidelined by any injury. I figured it would be only slightly rougher to do an 6-man Ragnar after doing a 12-man. So when Sarah tossed it out there, I was 100% game and excited. I seriously had no idea how hard this shit would be. Especially for someone who maxes out, currently, at 43 miles per week. (Spoiler: this is not enough to complete an ultra relay without exploding on the course in some shape or form.)

Throughout the last month or so, Ragnar was on the brain for the whole team. Including the competition. And I’m not going to sit here and pretend that Team Sparkle wasn’t in our plan to beat and I am 100% sure our team was in their radar in the same capacity. They wanted the win as much as we did. Any denial of that, to me, is hogwash. So I went into this Ragnar, not only committing to a whole lot more miles than I did last year, but with the added stress of knowing that I had to bring my game.

Nicole and SarahSR picked me up at my house Friday morning with the huge-ass van. I loaded all my stuff in and we made our way to the OC to get the rest of the team. We wrote a whole bunch of crap on it with markers and then headed to the start at the Huntington Beach pier. Unlike the 12-man team, we made it to our start on time (wink). SarahSR takes off as our lead runner with 42 total relay miles to complete – 10 miles in this first stretch. And finished those miles so fast – I heard other teams from our 1pm start time commenting on her badassery after OUaL took off for her 10 miles.

It was 80-85 degrees at that point, but Sarah laid the hammer down again with speedy miles, and Margot took off climbing a mountain on the Surface of the Sun (88 degrees now that we were further inland). The heat was rough, to say the least. Soon it was go time for me.

Now, after three handoffs from Margot, I realize that when she hands off the slap bracelet, she likes to hand it over in a sweaty rolled up wad. I laughed to myself each time she did this because I would stand there, straighten it out, and then put it on. Not the most seemless handoff but, hey, this isn’t a 4x100. This first handoff, looking at me so earnestly, she tells me to “be careful out there”.

Um. OK? My mind started doing it’s usual Crazy trying to figure out what I am supposed to be careful about. Am I going to DIE out here? Running along the Santa Ana River Trail by myself, I kept thinking maybe she encountered some scary dude that tried to grab her, or maybe she saw rattlesnakes? I was freaked out for at least a mile. Every non-Ragnar dude I saw on the trail, I was suspicious. Then I figured, maybe she was just worried about the heat since I had to do nearly 13 miles and it was still 85 and sunny. Turns out this is the case, she was worried about the heat.

I wore just the heart rate monitor for this leg which worked really well for me. With that kind of heat and the uphill climbing that was coming (1100 feet total), I really needed to keep my effort in check. I brought my hand held even though there were 3 water stops (way more than average for Ragnar “no van support” legs), and had topped it off twice. I think I drank at least 40 ounces of Nuun-spiked fluid on that leg.

I arrive at exchange 7 (after running a super tight shoulder with cars – um, dangerous? and trying to make chit chat with a 12-man runner who was about as friendly as an ox) to find my awesome teammates cheering for me, and SarahOUaL with a cup of ice. Which I promptly poured into my sports bra (thank goodness for cleavage). I was feeling pretty good even though my face was redder than a tomato. Then it all went to hell in a hand basket.

Leg 8 was a bitch, it climbed 700 feet and dropped 500 feet over 3.9 miles. And it was still 81 degrees. My first leg went from “pretty good” to “pretty annoying”. I hit stoplights galore. By the time I got to the exchange I was spent and I let out a huge F-bomb in front of Pam’s young son and husband (Awesome. That’s sarcasm. Not awesome). Pam takes off with her safety gear – finishing up quickly since she is another crazy fast runner, and then hands off to Nicole. We stopped at her mid-exchanged point to cheer her on at a place we deemed the stinkiest and nastiest exchanges of all exchanges – Corona Lake. Rotting fish and mosquitos. I’ll leave it at that. Sorry, Nicole, that you had to run through that place.

At this point, my body was starting to feel weird. By the time Nicole was done, I REALLY felt odd. Weird headache, slight nausea, and ever so slightly disoriented. I had drank plenty of Nuun and water so it wasn’t dehydration or electrolytes. Pam’s husband, via text message, says I have heat exhaustion and I respond with “Yeah, he’s probably right” and she makes a bag of ice for me to put on my neck. I spend the next two hours icing my neck/face and working through a bagel. Yeah. It took me two hours to eat that bagel. Tiny bites were all I could muster with the nausea. That bagel and I were BFFs. I laid there in the van with the bagel on my stomach. Then the bagel came with me to send off SR on her long ass night leg. 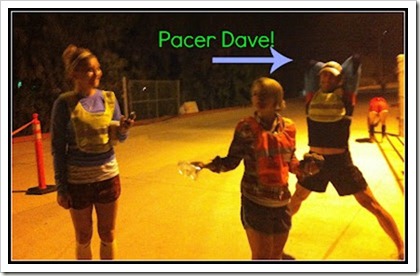 (stolen from Margot - note the bag of ice and half-eaten bagel, SR was already 9 miles into her leg)

I finally finished the tortured bagel when SR came in from her 19 mile leg (which, she killed, again, btw).

We were in Murrieta now, and Sarah is taking us down from Riverside into San Diego County, our third county we’re running through in 12 hours!