Let me first say: somewhere in the vast field of strewn garbage that is my Race Photos, there was actually a gem (by my standards). 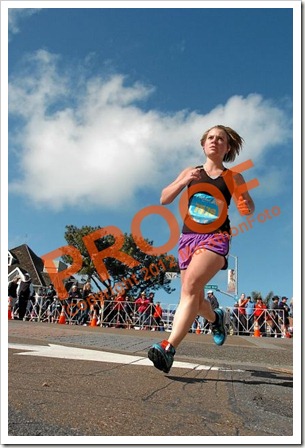 I liked it so much I considered buying it! That's crazy talk! And then I saw that the digital download is $22.95. Which is straight-up ridiculous.

(I should do some kind of market survey of other runners and find out what they would pay for an awesome race pic because it seems like no one I know has ever purchased one. It might show them they could actually make more money if they charged a little less - increased sales volume AND happier runners. I know I would have paid $10 for it – no more than that though).

So the race. I haven't even downloaded the splits from my Garmin which kind of tells you it was the tiniest little PR celebration in my mind.

I arrived near the start around 8:40am for a race start of 9:23am (women 30-39). I found parking, easily, near the train station which was my biggest and clearly unfounded worry. I did a mile and change of warm up, two strides, and then hit the porta potties (no toilet paper, thankfully, I didn't need to drop any kids off at the pool). Wandered over to the start and waited. As I waited, the picture dude came over (he was snapping pics all over) and here was my chance to actually compose myself and this was the outcome: 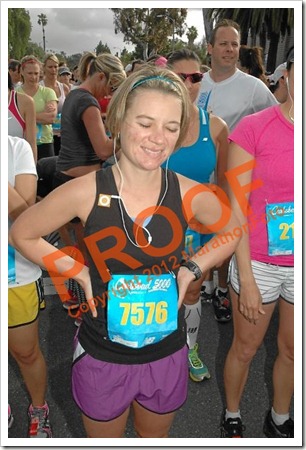 When given all the chances possible to take a good photo, I will find a way to screw it up.

Shortly after, Nicole found me (how she did is amazing considering my height) a few minutes after another runner behind me randomly tapped me and wished me luck (which was really nice, I am still kind of struck by it - it was like saying "peace be with you" or something in church when you turn around to some stranger in the pew behind you).

We took off on-time (if not maybe 20 seconds before 9:23am), and within 20 yards, one girl goes down hard. Ouch. Look down at pace says 6:12, and Nicole is already saying we're going too fast. Aye aye, Captain. This was race #4 for her, each with only 15 minutes of rest (!!!). Who's ready for Ragnar? She would have fully kicked my ass in race #1, but smartly slowed it down and let me go and kill myself in the first mile.

This mile was mostly downhill, so it felt pretty good. I mean, that was my first sub-7 mile in a race since high school. Seriously. We hit the turn and it was uphill into a headwind.

Mile 2 kind of broke me. I was gunning for 21:59 and I think had I not let myself get mentally beaten down by this mile, I might have pulled it off.
We got a little downhill and then turned back for the last stretch on the 101. And paid for the downhill with an uphill. This mile reminded me why I hate 5Ks. My legs didn’t want to do it anymore. I didn’t necessarily feel tired, breathing wise, by my legs just didn’t want to go any faster.

Last .14: 51 (?  I am really that lazy that I don’t feel like hooking up my garmin to the computer - so I added the 3 previous splits up and subtracted from the total finish time).

My previous 5K PR was like 23:27, I think (on a course that was long). But, yeah, that 21:59 eluded me. I’m sure if I do some speedwork on the track and race the distance a few more times than like twice a year, I’ll probably drop under 22:00. But I truly dislike running 5Ks, so I’m not really sure I want to bother at this juncture.

I was happy to come in in first 250 to get the medal - which is your standard good quality medal that Competitor Group races provide. Considering I paid $30 for the race, got a nice medal and well-fitting tech-tee, it was a good deal. The food at the end, which was only a box of cascadia (?) cereal, was definitely week. But since it was just a 5K, it wasn’t that big of a deal.

Nicole and I then meandered around for a bit - she had 90 minutes before her last race where we were to meet up with Caitlin. I wanted to try to get in 15-16 miles (which didn’t happen) but I only managed to do 5 until I had to get back for the last race (which technically, I bandited. But I didn’t have my d-tag on, nor did I take a medal).

Likely you’ve already read Nicole’s or Caitlin’s recap, but suffice to say, Nicole and I decided, wordlessly actually, that we were going to pace Caitlin to a huge PR. She said 8-9 minute pace, which we took more like 8. Girlfriend killed it with 25 and change AND got a medal.