Temecula Half Marathon: An Ass Kicking

And not that I kicked its ass but more like it wiped the floor with mine.

I had noted in my last post that I figured my stomach was all up in arms over anxiety with the Husband’s potential full-time job (which he got, by the way – woo hoo!). Except this supposed anxiety-induced stomach ache lingered all day and into Saturday. With mid-upper stomach cramping every 30-90 minutes or so (not bad enough to have my doubling over but pretty damn uncomfortable).

Just in case you think I exaggerate about feeling like dog-turd:

I was really wondering if maybe I was nuts running this race given my state. The stomach cramping had finally stopped but apparently it had resulted in something requiring me to actually take an anti-poop-yourself medicine. And honestly, if it wasn’t 35 minutes from my house and I hadn’t already paid for it I would not have run. No freaking way.

So we got up there, I picked up my bib and chip, and hear the announcer say that the course had to be rerouted as part of it was closed. Errr, is that why there are cones up the ridiculously steep road to get to the winery? (Mt Palomar Winery was the start/finish)

I find Ashley and her BF (they are so cute – he is her race support except runs the entire time along side her; not sure if gets any better than that as far as race support!), and we chat for a bit until lining up for the start.

The start was weird – because of the whole running-on-55mph-road (Rancho California) they released us in waves of 10-20. Up a hill. Yeah. And then down a hill so steep that you can’t really get a good speed going.

I started out conservatively because I was seriously concerned with the whole being kind of sick thing. I felt pretty decent most of the way and I wasn’t pushing it – I could easily have full on conversations – my breathing was easy. Around mile 8 I realized I really had to pee. Like, where I had to slow down for a second and make sure I got the situation under control. Unfortunately, I was in this near-peeing myself the rest of the race – at some points it was manageable, at others, not so much.

And The Hills. Good Lord. The original course had an elevation gain of like 450 feet or something on MapMyRun. This new route? 889 feet. And half of the course was dirt road. The last group of hills from mile 12 to 13 did me in. I think some dehydration from this stomach thing finally caught up with me. And the reality is I totally could have pushed harder. For sure. I wasn’t breathing hard and my legs didn’t feel awful. But honestly, I was worried that I would put myself in a worse position and prolong this stupid bug if I went all out just to get under 2 hours.

The last mile was a mother f*cker. Seriously. Downright cruel to put that kind of hill at the end. We were in the last 400 yards of the race – when you’re supposed to be pushing it – with this hill. So steep that everyone around me was walking up it. Including myself. And I honestly didn’t care at that point. Killing myself up that hill wasn’t going to win any points in my mind. 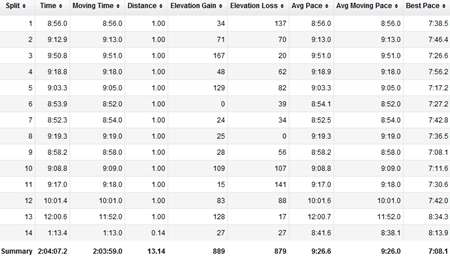 Slower pace than my 14-mile training run two weeks ago.

But I told my husband this morning that my goal was to just finish the race without crapping myself. Aiming high over here. I was fully aware I’d likely finish in more than 2 hours. Sure,I don’t feel great about it, but I did what I set out to do. Obviously, I didn’t negative split but I’m going to give myself a pass on this one given the circumstances.

Hopefully Mission Inn in 3 weeks will turn out better!