I’m not gonna lie. When my alarm went off at 5am and could not understand why it was going off, I was in no way excited to drive up to Irvine (when I finally remembered why I had set my alarm the night before). But I dragged my ass out of bed anyway, made my morning soy latte, and started packing up all the fixins’ for a post-race picnic.

I pulled into the parking lot and found Sarah sitting in her car, trying to keep from freezing her tuckus off. In my scrambling around that morning, I had remembered picnic stuff but forgotten a running long sleeve and the all-important body glide (luckily I was able to avoid chaffage otherwise it could have been ugly).

Heather meandered up shortly after. There was a huge flock of duck-like birds hanging out by the lake we were to be running around. 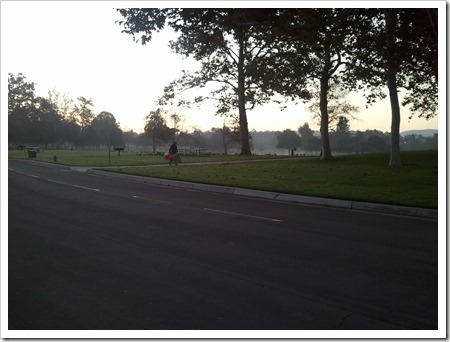 Heather did not like these birds. In fact, she thinks all birds are creepy. Other things creepy to Heather? Feet. Hands. Pretty much anything. Apparently the Mission Inn Half Marathon is also creepy. Target is not, though. Hills are creepy too.

As you’ve probably read in other recaps, we ran a 1.09 mile loop around the lake. It was pretty damn flat, which was fine be me after last weekend’s hill smackdown in Temecula. We took off and I had Sarah as my running company which made the miles seriously fly by. It was fun leap-frogging with other runners and chatting it up with the race director/volunteers at the aid station every few laps. During our laps Kat showed up – we spied her blond pony tail and NY Giants hat and shirt. She is so NY – it’s awesome. Reminds me of my 4 year college stint in the Big Apple. We just can’t watch NY or Boston sports together. Ever.

I seriously felt like a million bucks after about the 14-15 mile mark. I was shooting for 15-16 and then when Sarah said she was doing 18, I figured I complete 15 laps running since I would have someone to run with. I ended up completely 16.41 @ 9:00.2 pace. We had about 4 minutes, un-timed, at aid station stops – Garmin has that feature that gives you actual elapsed time. It doesn’t let you lie to yourself about breaks (why you gotta be so honest, Garmin?).

I seriously had to force myself not to run 20 miles yesterday because I totally felt like I could. But it would have been colossally stupid considering my longest run in recent weeks is 14. I’m not interested in injuring myself at this point. Or ever, obviously.

Sarah continued to do two more laps, and I walked one with a little jog in there because 1.09 just walking got really boring.

Heather and I parked our behinds on a picnic blanket and waited for Sarah to decide she was done running. Sam (the Operation Jack man who is a speedy runner and super nice) tried to pressure her into more running laps as she was waffling on whether or not she was checking out. Clearly all us runners are the same. We love to be annoying and taunt other people into running more. I’m happy to see we all do it rather shamelessly.

Once everyone was done we sat on the grass to cheer for the remaining runners and see who would end up running the most laps (turns out 31 for the men, and 30 for the women was the final tally). Hopefully we weren’t just an annoying group of chicks hanging out by the aid station. We tried to cheer for the diehards when we remembered however we were mostly really good at talking about other runners while they were unknowingly 6 feet from us. Awkward. At least we weren’t saying anything bad! 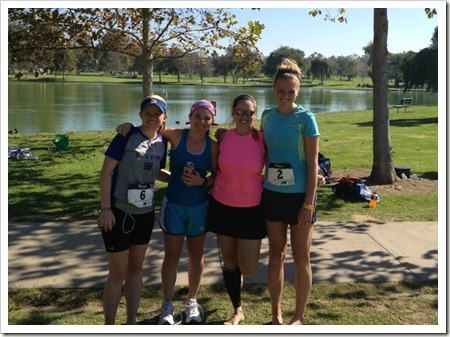 (Stolen from Sarah OUAL! I look like a miniature GI Jane with that bandana. Whatever.)

Sarah is tall, but really, the rest of us are short. All 5’2” and under (I’m in the “under” category), so it really isn’t hard to look super tall in comparison.

All in all, it was a great time. I wish there were more opportunities like this one. There was no race stress, the course was flat/easy/scenic, and easy access to the aid station every mile. I guess that’s why people join running clubs? This was kind of more awesome than a running club though. And at the end we got a t-shirt and a pretty nice medal. Not one of those cheesy generic medals. Think I will be running Operation Jack’s December half marathon (not sure I will be ready for the full at that point) based on the awesomeness of this un-race.