Never one to say no to a race, I agreed to run a little 4K XC community race in Mission Bay this past Saturday. The 4K was a way to let the slow folks participate in the USATF National Cross Country Championships and then watch the fast people afterwards in 8K and 12K races. And let me just say that my time was spanked repeatedly by 50+ year old women in the masters 40+ race. The qualifying requirements for masters are age-graded so the paces were ranging from 5:00’s to 12:00’s (Three ladies were 75+ - one of them ran 8:57 pace for 5 miles! At 77!).

Here I am in pain finishing the last loop: 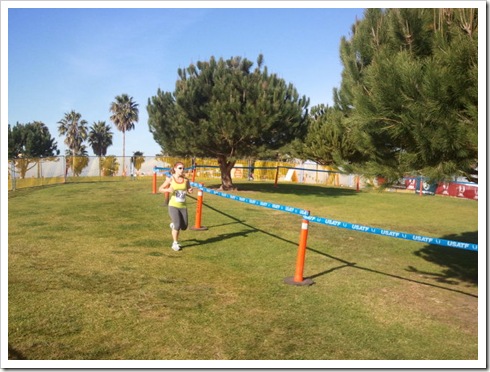 It was probably the hardest 2.5 miles I have run in a long time. The course was two loops on grass in Mission Bay Park (Hello, Monotony). Turns out that grass? Kind of sucks to run on. Especially mushy grass. My garmin showed a pace of 7:46 which is quite poopy for less than a 5K. Official results appear to have never been posted anywhere (probably a good thing). I consoled myself with a margarita and brunch in Old Town hoping that Sunday’s 10K would end up better.

Sunday morning I was feeling all SkinnyRunner crazy, doing two races in one weekend but then again, her two races would be two half marathons not a 4K and a 10K. Whatever. We got up at the ass-crack of dawn to drive up to Redondo Beach for the 10K. Parking was interesting – but I figured it would be. After an emergency pee-stop at Vons and 5 minutes circling for street parking, I ended up having the HZ drop me off about a half mile from the start and I jogged it in. It was actually a good warm up. I was pleasantly surprised with the number of porta-johns at the start and how easily I registered.

I had read that if you want to run a good time, get as close to the start line as possible since there are no time-specific corrals or even signage. And people just line up where-ever regardless of pace. I got within 20 feet of the start didn’t have to do any weaving. My first mile was a bit fast (7:34) and then I settled down in the 7:40s – except for mile 4 which had longish incline. Someone also must have thought it was funny to add a nice hill at mile 5.5. That was a fun time. It took me like 20-30 seconds to recover from that last hill – I was telling myself to buck up, already, and get over it, we’re going down hill. But my quads were seriously burning and telling me to screw off. The finish line came out of nowhere – I turned the corner and there was like 100 yards or less to the finish – had a I known, I would have started picking it up earlier.

I ended up finishing 48:17 (7:47 pace – 14/321 in my age group, 82/1687 women), which right there tells you that running on grass sucks. Sure, your knees will be happy but your ego pays the price! I ran only 1 second slower per mile at more than twice the distance on asphalt. On somewhat tired legs from the previous day’s race. At least I redeemed myself in my own mind.  Still a little sore today but I figure it’ll be all gone tomorrow and I’ll be good as new by Saturday morning!