Haaay everybody!
That just reminded me of Bruce from Family Guy. Man, does that guy crack me up. "Oooh Nooo!"
Anyway.
It's feeling very Wednesday today. The good thing is that the weather has retreated from Mother Effing Hot all the way down to cool and drizzly again. Weirdest July ever in San Diego. The unfortunate part of this cooling is that southern Californians actually drive worse with slight drizzle in July than pouring rain in March. It seems to throw off their equilibrium. If it's drizzling in the summer I can expect my 30 mile commute to be an hour, minimum. So that's been fun. Throw in the Del Mar races and a stick shift car and you get Chacha talking herself down from screaming angry raged profanities.
Louie, the Great Christener of Chairs and Potted Plants, was snipped on Monday. I felt kinda bad but it had to be done. Now he's sporting the cone. 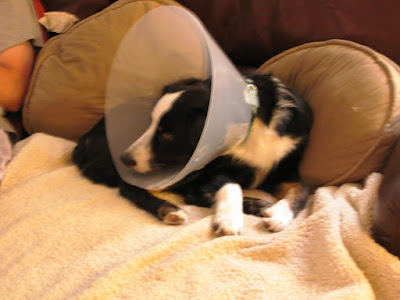 The day after the surgery he wasn't too mobile with it on. Day 3, he's charging around, slamming into the corners of walls, bumping it on stairs, etc. While I'm glad it's not depressing him, it's sort of unnerving to be worrying about what type of destruction he might be causing with it. He seems to be very nonchalant about it's presence. Doesn't even care when we put it on. Which makes me wonder how day 4 through 14 are going to go.
There was a lot of coaxing to pee the first evening. Granted, he didn't drink or eat much after the Huz picked him up from the vet, but he didn't pee for like 6 hours and we were starting to worry. After about the 6th attmpt of parading him outside, asking him to "potty" to no avail, out of nowhere with no fanfare, picked up his leg and peed. And peed. And then peed. And then I grew two new white hairs on my head waiting for him to empty his bladder. I guess the 27th time we asked him to potty finally clicked in his still slightly drugged-up doggy head.
Oh, and the other earth shattering news I have for you (no, Husband did not find a job - I'll save you the question - even part-time employers like Lowes and HD are not responding), is I finally started taking apart the old chair: 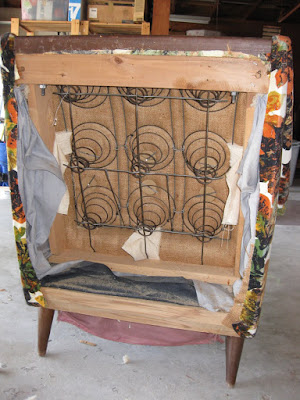 I'm about 40% through stripping it down. Sometime in 2015 I expect to have the afters for you. Really, it's probably a couple weeks out before it gets done. I am taking pictures at eat step to remember how it was assembled. I still have no clue what year the chair is from or what company made it. I'm pretty confident it's from the 70s or maybe even the 60s based on the fabric print and the mid-century styling. Once I remove the fabric I have to sand down and refinish the wood pieces because they are dinged up. I suppose I could leave them but they are kind of in rough shape and hopefully it'll be quick since they're isn't much of it. Then apply new batting, sew piping, cover buttons, staple it all down, etc, etc, etc. No wonder if costs and arm and a leg to pay someone to do it - all the labor!
I'll keep you posted on the progress or lack thereof.
Labels: dogs etc house