Get In My Belly

I eat meat about once or twice a week depending on if I have to buy lunch of if I've been good about planning (generally, the non-meat options at work are "blah" so I just opt for whatever looks decent and reasonably healthy). This evening was one of those eating meat at home days for me. Last Friday I scored 69 cents a pound family pack of drumsticks and another pack of thighs at Henry's. I saw those thighs and immediately thought - nothing dirty, stop it - I thought "Country Captain!" It was one of those 72-hours-only deals and you know my ass was up early to capitalize on it. And California olive oil and $2.99 lb raw almonds. It was a weird combination of stuff sitting in my cart.
So, the Country Caption. The Husband had seen an episode of Throwdown with Bobby Flay and the Lee brothers. Flay had challenged them to a throwdown of Country Captain which apparently is a dish known fairly well in the South. I had bought Huz the Lee Brothers cookbook from his Amazon wish list and the funny thing is I didn't even know what recipe was the throwdown, but when I paged through the book, I dog-eared it as one I was going to make because it sounded scrumptious and didn't have any exotic, regional ingredients. Longest sentence ever. Anyway.
Here is it stewing in my Paula Dean Dutch oven. Which is a decent piece of cookware, I must say. It is another Walmart purchase for like $40-ish or something. Might have been $50, I can't remember anymore. Either way, it rocks - the whole on the stove-top-into-the-oven versatility of it is entirely worth the somewhat high price tag (which is still low for a cast iron dutch oven). 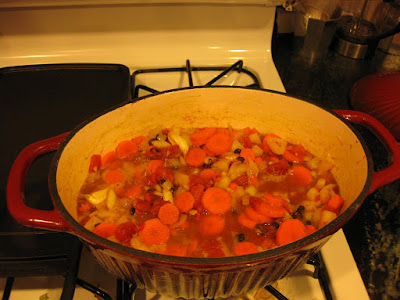 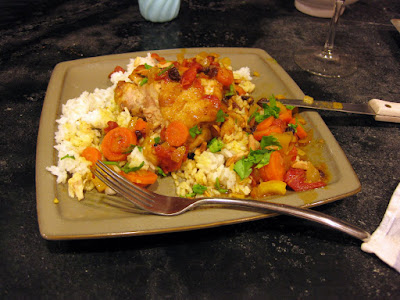 Sitting on a bed of rice with toasted almonds, parsley, and... bacon! Yes, bacon on top. I had already started chowing down when I realized that I wanted to take a picture of the dang thing for the blog. That's how good it is - it'll steal your brain and you'll forget about everything except eating your Country Captain.
Thank God I ran 7 miles this morning to make up for that chicken and bacon fat! ;)
Labels: food