Remember that teak table I bought and then was stuck with for a while? I finally sold it! Thank God. I ended up just selling it for what I paid and I am totally fine with that. My strategy worked, I think. I had it posted for $160 in LA and got an interested buyer who drove down to check it out. It's not a short drive so I knew she was interested and likely thought the $160 wasn't a bad price. Really I just wanted to get rid of the damn thing. When she started the hem-and-haw list of reasons why she didn't know if she REALLY wanted it (usual CL bargaining crap) I just flat-out told her I was mostly interested in getting the $100 back that I paid. Sealed the deal. The Husband said I wasn't much of a bargainer but I wanted done with that table. Unscathed.
On to the chair.
I ripped it apart this past weekend - this is what it looks like in the garage right now: 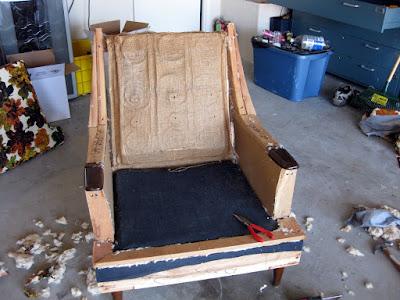 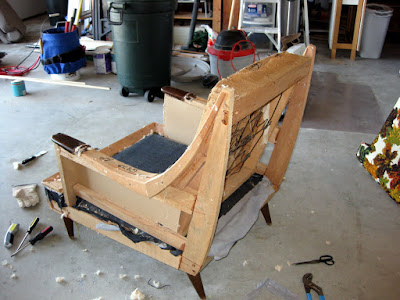 And the cool thing is when I took off the bottom - I found this! 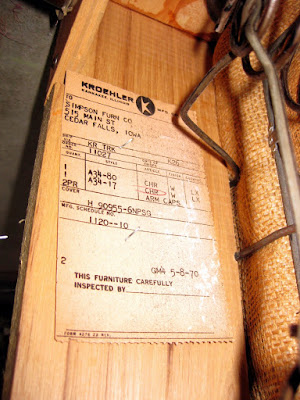 Kroehler. Which Google tells me is/was(?) a Chicago-based furniture company. Seems like a decently made chair for a $25 CL find. The original upholstery had to go though. And I was right on the money with the date of manufacture. I figured it could be the 60s but felt more like 70s and it's from the first half of 1970.
The other random crap I found in the chair was a pen cap, piece of a child's plastic toy, drugs (a blue pill of some sort - looked like an antibiotic or something), a piece of a paper back book page too small to identify the origin, paper clips, crumbs, but no money! What the hell. Aren't you supposed to find change in couches and chairs? I just find old drugs in my chairs, apparently.
Labels: craigslist etc home improvement house