Stopping at Four. For Now.

I am a reader of Mabel's House and love Liz's eclectic vintage decor. Sometime last year I noticed a vintage fan in her living room (or kitchen, I can't remember) and then realized that she had several scattered around the house (yes, I combed her house photos). For whatever reason, I developed an obsession with getting a vintage electric fan. I crawled eBay and settled on this little Westinghouse from the 1930s for something like $17 with shipping. He still runs! Though not with a huge amount of vigor. It's ok, he's old - I just got him because he's cute: 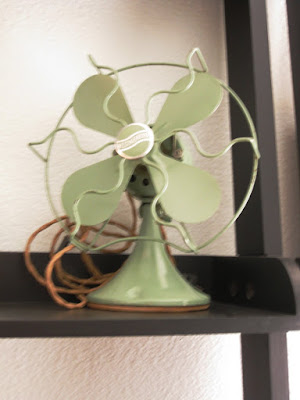 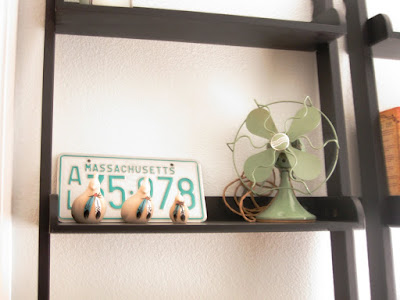 A few months passed. I saw more vintage fans on decor blogs like Apartment Therapy and Design Sponge. So, I got another from eBay. A 1950 GE Vortalex ($36 with s&h): 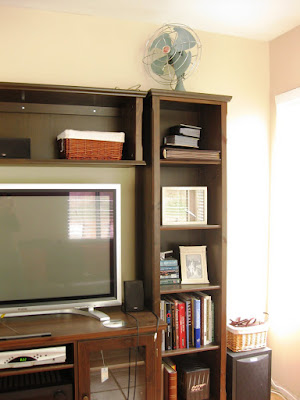 This one turned out to be one of those things where the seller doesn't REALLY disclose the true condition of the thing. "Cage needs work. Nice little rehab project with out much fuss" doesn't necessarily describe that actually the cage was broken in 5 different places, bent and held together with wire and twisty ties (!). Yeah. The electrical cord running from the motor to the base was duct-taped. And this thing was Filthy Dirty. It took a whole week to take it apart and clean it. I have no idea if it actually ran upon arrival - I should have tried but the duct-taped cord freaked me out.
I rewired that part with vintage cloth-covered wire but it seems something is not right because it barely turns on the fastest speed. I think it's mechanical since I took a picture and wired it exactly the same way it was before. Again, I didn't get it to actually use day-to-day, though I am peeved it isn't fully working. The engineer in me wants to continue attempting to fix it but I simply don't want to waste anymore of my life on it. Oh, and we even soldered some of the weld points of the cage with a plumber's torch (that was one of those trying marriage moments where we're both trying to figure out how to use something a little scary for the first time). Without much fuss, my ass. My hemorrhoids give me less fuss. I haven't given the seller any feedback at this point because I can't say he/she out-and-out lied, they just chose not to disclose all the the crap wrong with it (and didn't offer "zoom" on the posted photos). 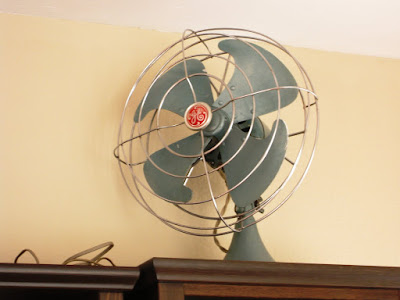 About 4 days after I "won" [sarcasm] the GE Vortalex I searched Craigslist for fans on a whim. I rarely see vintage fans on there. Lo and behold, I hit the motherload. This guy had worked for the Salvation Army and had amassed a collection of 10+ fans that he was unloading for $10 a piece. 10 bucks.
This one is my new little kitchen fan - Bersted Zero fan from the 1940s. This little lady runs! I cleaned her up but she was in great condition even before I buffed and polished. He had the larger version but he wasn't selling it - can't blame him. They are such cute fans. This one is maybe 10" tall. The bigger version is probably closer to 13" and oscillates. 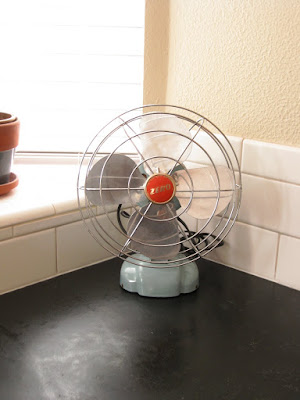 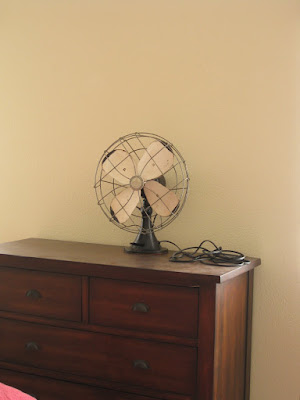 The oscillator is broken but, holy smokes, can this thing pump out air. It's almost scary how well it works. I may at some point try to fix the oscillator because this fan seems like it could handle frequent use. For now I just cleaned it up (took 3 days to scrub the fans, base, and cage). I think it might be my favorite. 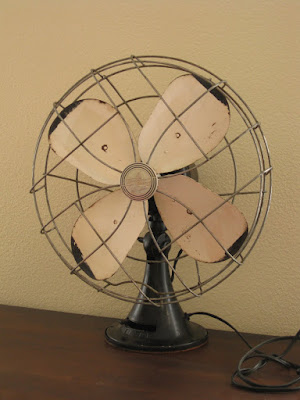 Anyone else have a vintage fan obssession?
Labels: craigslist etc gadgets house