Let There Be Light!

Last week I took a day and a half off to work on clearing out the garage to have a garage sale on Saturday morning. I amhappy to report we made $100 and I was probably way too cheap but we were done by 10:30am! So, I might have been able to have more moola but I would have been sitting there longer, too.

On Thursday afternoon, I took on replacing the dining room chandelier so I could sell it at the garage sale. Here is the old one: 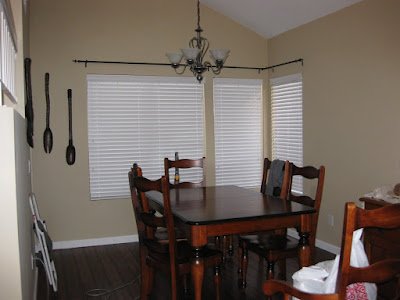 I know, you are thinking "Chacha, why would you take out a perfectly good, nice chandelier?" I hear that. But look at that picture. You might not be able to see from that angle but it's (a) too high in the air to be a proper dining room chandelier, (b) not centered with the table and could never be if I want someone to be able to sit at the end of the table. Unless that person is Nicole Ritchie. It has been driving me nuts for 3 years. The original fixture, which I have seen in real estate listings for other houses in our tract, was swagged with a hook so that it was centered over the table. Whoever replaced it decided it was not important that future owners be able to use the dining room as a dining room. Either that or they did not have OCD and the very pressing need to have it CENTERED.

I bought the Eden Pendant from CB2 which is actually a plug in fixture. So we had to cut off the plug and hard wire it. I bought a basic pendant light without the shade from Lowes for the light canopy (the canopies they had for sale were UGLY. So I figured it was worth paying $15 more for a light canopy that looked like it matched the fixture). It also uses a lot less energy since it's just one CFL bulb. The other one had 6 lights.

Here are the afters: Total cost was $65 for the light (shipping and tax), $20 for the pendant fixture, and $3 for the swag hook. The swag part is not as "clean" as I'd like but I'd rather have that then an off-center, way-too-high chandelier.

A little tip on hardwiring a plug-in fixture - should you ever find yourself doing this. If the plug wire does not have a white line on it it usually has a ridge along the edge - you can feel one is smooth and one has a ridge. The smooth is the black and the ridged is the white!
Labels: home improvement