Like most wacky home decor/renovation addicts, I have many projects in process, and also projects not yet started waiting in the queue. The majority of them are little projects, a couple are larger (like new windows, remodel master bathroom, etc).
I try to make progress on the little projects during the week with the bits of incontiguous time I have during the day. Last week and weekend I worked on the wall/framed art project. I had purchased a bunch of frames from Goodwill (one is massive - haven't completed what will go with that one yet - a big oil painting of poppies). None of them the same color. So I spray painted them Rustoleum Heirloom White.
The first two are blown up black and white pictures that The Husband took (Venice, and a tree at the Grand Canyon): 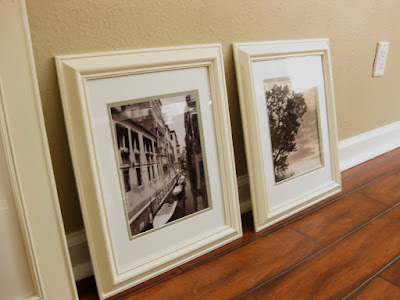 The frames were $3.99 at Goodwill, the mattes were $4.99 at Michaels (but I used a 40% coupon on one of them), blowing up the picture to 8" x 10" was only $3 at Wal-mart: total of $12 each.
Speaking of the 40% coupon - Michaels really ropes you in, huh? I used another 40% coupon I had yesterday to pick up an oil paint set (I guess my 20+ year old paints got thrown out and some point - likely because they were bad - not even sure how I managed to coax usefulness out of my 12 year old water color paints), and they gave me a 50% (!) coupon for next week. Basically, I'm buying one thing at a time there (which requires restraint) because I know that they will give me yet another coupon. More trips but, I'm usually in that area anyway.
Alright, moving on.
I got this weirdly shaped frame that was $7.99. It had a print of fall leaves in it. I again spray painted it. It was originally intended for the Husband's blown up photo but after I realized the matte dimensions were stupidly narrow. Rather than re-donate it back to Goodwill I figured it was a good shape to paint a watercolor my favorite bird (one of my favorites - I also love the roadrunner), the blue heron: 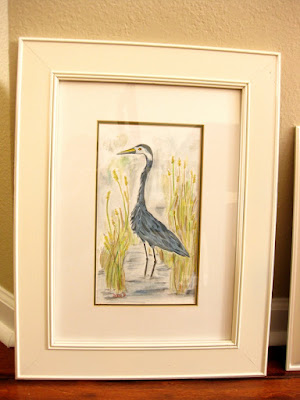 Hardly some "great masterpiece" but I'm content with the outcome. I generally only paint/draw still life or flowers/plants. For a first attempt at a living, breathing animal, it came out OK.
The last funny thing I did was a shadow box. I had an impulse buy at an antique store we went to in order to kill time. An old pair of scissors/sheers from the 30s. I didn't want to actually use them for cutting, but wanted to display them. The Husband's buddy had the idea of shadow boxing it, so I grabbed a shadow box at Goodwill. Took it apart and spray painted it the same Heirloom White (the room this stuff is going into has dark wood so I wanted to use light frames).
For the background, I hot glued a scrap of burlap I had leftover from the curtains, and then used clear picture wire (fishing line would have been better as it is thinner but I had the picture wire and didn't want to buy anything else) to hold the scissors in place at 3 mounting points (I drilled small holes into the wood backing). 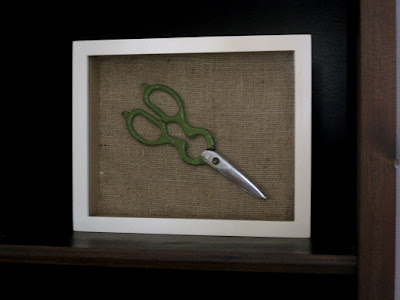 $4.99 for the box, $8 for the scissors - $13 total.
Alright, folks, hope you enjoyed my cobbled-together art! Have a good weekend!
Labels: etc home improvement