My House Is Spoiled

Spoiled like a bratty 5-year old who screams bloody murder when his parents won't get him the toy he wants. Apparently, all the new upgrades the house has gotten (new kitchen, new copper plumbing, new fireplace facade, new flooring throughout, paint, etc) haven't been enough for it because it demanded a new water heater. Wednesday, our water heater decided to spring a leak and who knows what else was wrong because even after shutting off the water to the heater after we drained it, somehow filled back up made a minor flood in the garage so we had to shut it off around 11:30pm until the plumber came the next morning. We had no water for 12 or so hours so that was fun.

Now, I'm complaining, but not all that seriously, because at least I could access water somewhere (at work, the Y, etc) unlike the poor people in Haiti. So my problems don't compare. But I will tell you that cold showers are miserable - I took one after my run on Wednesday (before we realized the flood issue in the garage) and I had to keep telling myself that at least I had water and I wasn't in Minnesota where cold water is REALLY COLD in January. I kept repeating "Suck it up! At least you have water." Oh it was cold.

Without further ado, here is the new tankless water heater: 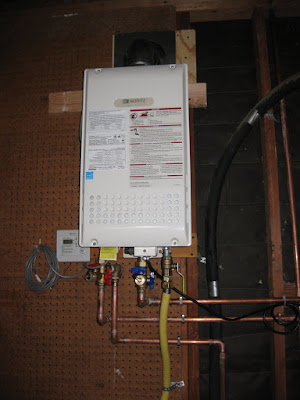 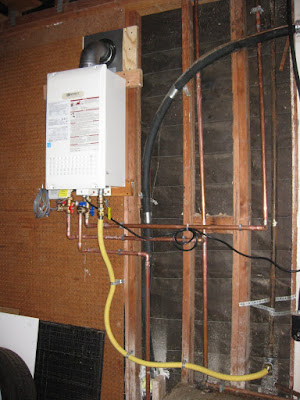 A tank water heater would have been cheaper, but there is a 30% tax credit this year for the tankless variety and I try to do what I can as far as helping out the environment. This unit will use less energy and eventually pay for itself. Plus, it lasts 20 years versus the 10 year lifespan of a tank water heater. Takes up less space, too!

Total cost was painful, to say the least:
(1) Plumber labor - $695 (which is apparently lower than what he normally charges, so he says)
(2) Tankless water heater and all the required trimmings and 8.75% state tax- $1339.

So, $2034 to replace our defunct water heater with a tankless. We'll get back $600 next year via tax return so effective cost is around $1400. A traditional water heater replacement would probably have cost around $700-900.

Things to note about tankless: they require more stuff. Venting and exhaust has to be bigger since when it does heat water is uses quite a bit of energy. Like a mini furnace. Our heater is natural gas powered and needed a 3/4" gas line. I don't think we had that before so that had to be changed by the plumber. There was also a special install kit - not sure what was contained in it, but the actual price of the tankless heater was around $950. There was about $200-$300 of extra stuff on top of just the heater.

Also, Home Depot, at least in our area, doesn't carry them in stock, you have to order it which isn't very helpful when you don't have any water heater at all to use while you're waiting for it to arrive. Lowes carried only one model and literally only one physical unit (so, our local Lowe's didn't have one but the next town over did). Beyond this the models and prices at Home Depot and Lowes are not great. Luckily, our plumber dude took The Husband with him to his plumbing supply store where we got a heater with 50% more capacity and cost $100 less than the unit at Lowes (they had a 6.x gallons per minute Bosch for $1099 and ours is a 9.x gallons per minute Noritz for $950 - we probably don't need 9.x GPM, should have gone with 7.x for $200 less. Oh well.).

If you have hard water (we have very hard water - lots of mineral deposits), it's not ideal for tankless. You can install a filter at the point before the water gets to the heater, but we decided to wait a few months and get a softener so that we'll have less hard water all over the house and not just the hot water. That way our dishwasher will work better, our pipes will be happier, the water heater will be happy, we can use less soap, etc, etc.

Yet another spendy month. Boo.
Labels: crapped out home improvement