Is what I am. Behind on just about everything. Reading blogs (something like 100 posts), cleaning, laundry, guitar & piano practicing, baseboard and molding, etc. Why?

Well, this is why: 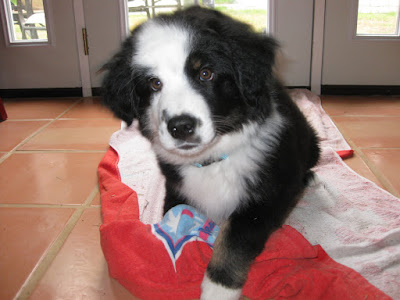 Yes, in a moment of weakness the Husband relented to my repeated requests for a second dog. And I ran with it, as I normally do (impetuous, much?). In the end, we wanted another miniature australian shepherd (and there are none available to rescue in California, or even Nevada or Arizona), so we went with a puppy. This little tank is 12 weeks (and 12.5 pounds - he is pretty big for a mini aussie at this stage).

He requires constant attention because he has yet to figure out that when we are yelling angry no's as he is peeing on the wood floor that he is, in fact, not supposed to pee on said floor. Compared to the female puppies we've had, he is learning at a much slower rate. By now (5 days since we got him), both Nikki and Savannah had figured it out. He is maybe 20% there. He is not crapping in the house, so I guess that's a bonus.

So, yeah, this little bugger has occupied any time I have at home. The only thing I am not letting slide is my running - I am in the peak week of my half marathon training, and by God, I am not sabotaging the hard work I put in. I don't have two black toenails because I like the ugly bruised foot look.

The other thing complicating matters is that is has been raining like crazy. Like, build an ark and collect two of each animal, crazy. We are on day 5. Last night it poured for 6 straight hours (on top of the pouring that happened during the day). I drove through hail on Monday evening. Also hyrdoplaned. The 5 North was also flooded. We lost power at the office Tuesday afternoon for more than 2 hours (in the midst of having entirely too much work to do), along with a tornado watch. Yes, tornado. In California. Seal Beach had one touch down that flipped several cars over. When it rains in So Cal it's ridiculous. It can't be normal rain it has to be extreme with 50-70 mph winds. So housebreaking a puppy when you have a veritable swamp in your back yard with high winds is a bit of a challenge.

But he is cute as all puppies are. How can you not love a soft furry playful puppy? (Except when they are chewing your shoes or peeing on your floor, then maybe you can not love them.) Anyway. I just wanted to give you guys an update as to why I am MIA on comments and everything. At least now the gender balance in the house is totally even.
Labels: california dogs