I've got a plan from my group. Boiled down to the coach having a completed registration form for me, and subsequently not remembering that I had paid by check like a month ago (I did that to avoid paying Active an additional $8). Membership fees for this group is so reasonable that I suppose these hiccups are to be expected. If I were paying > $100 a month, I would be more annoyed. Anyway, his plan mileage is lining up exactly to where I'm at so I'm shifting over as of Saturday of this week. I had good success with is at CIM and it's a solid plan. I may consider changing the straight tempos to cruise intervals if I feel like I'm having a hard time doing 5 straight tempo miles at like 7:30.

We're having the rainiest winter since 2005-2006. As I write this we're in day 3 of forecasted 6 days of rain. Seems like next week it'll clear up but at the rate we're going, I'm pretty sure we'll get another storm in the next two weeks. This year I think we'll finally kick the drought. Years like this remind me that maybe I can't live in Seattle because I'm getting a little tired of so many days of rain this last month. The sump pumps under our house have been on a lot, even when it isn't raining. The ground is just saturated. And our grapefruit tree apparently doesn't love the additional rain last season and this season because the fruit is like maybe 40% of the volume of last year, and they are all over the place: some are green, some look like they might be ripe. Nothing like the first two years we lived here where we have huge, sweet grapefruits all ripening at the same time, in late December.

This week, somehow, I managed to avoid running in the rain, though I think next week I won't be so lucky.

Elise was sick and awake a lot during the night so I was super tired for this run. It still felt OK, and HR data looks good. 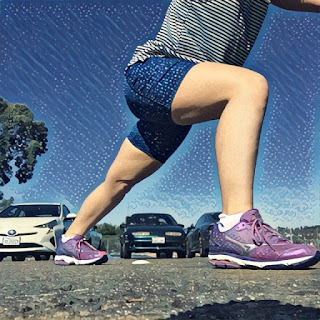 Easy run with some plyometric exercises.

Basically, I felt like I got my ass kicked good. Average was 7:46, but grade adjusted pace was 7:31. Average HR of 156 - actually thought it was going to be higher with all the hard running up hill.

At this point I realized that I had run 15 days straight with no rest days. I think that might be the longest streak for me ever. And I had no desire to continue it. Also, it was raining cats and dogs with winds gusting over 50 mph. No thanks.

The group was running 5-6 miles today since the San Diego Rock n Roll season started. I arrived just before the run was up, and ran a little more than 8 miles before meeting up with the group. As expected, when we're at the beginning of the season, it's full-steam ahead, near 8:00. I was happy that I ran my first 8 miles in the 8:50-9:30 range. Ended up with a fairly low average HR, 149 bpm. Legs felt pretty pooped at the end of it though. At least we didn't get any rain!

Picked up a pair of Mizuno Wave Creation 17 (last season model) for $59.99 which is like $100 under retail and I figured I would take them for a test run and figure out if I should get another pair. I will say that I'm totally not used to running in higher end cushion shoes. I liked it, though! I mean, I can feel why they are $160 vs the others at $120 (though, retail prices of running shoes are absurd but that's another argument entirely).