Boston Marathon Training Week 3: Legs are getting used to this

Still plugging away at the BAA plan. Not sure if I'm going to leave the plan, though I did ping the coach again as a last ditch effort. The end of this week was the Carlsbad Half Marathon and I had been trying to figure out what to do with it. It's fairly early in the ramping up of mileage and quality work that I didn't think I was in shape to PR and wasn't sure it was worth diverting Boston workout efforts that were just starting up again for the sake of tapering. Spoiler: I ended up running MP, a decision that was make within the first mile of the race.


Thanks to splitting a liter bottle (not your standard 750ml) of Barolo from Costco (good shit, like 93 points, $34) with my husband on Sunday evening, I had a lingering headache through the late afternoon. Did not make for the most comfortable run, but my legs felt good and HR was low (average 134) so I just had to deal with my head! Ran in my Under Armour Drift shoes - I was on the fence with them but the more I use them, the more I'm kinda digging them.

I think this workout is intended to be for VO2Max - it doesn't specify but just the nature of the second half of it leads me to believe that's the intent. Goal pace chart is outlined on the BAA site - I picked the 3:30 finish time goal as it's closest to my last marathon time, and the goal paces are also where I'm at recent races.

When I first looked at this workout, I was like: "Well this shouldn't be too bad." Famous Last Words.

It was rough and I'm fairly certain it was thanks to the scant 90 second recoveries (though the fact that it was sunny and 65F - warmer than what we've been seeing recently - didn't help). The shortest recoveries I've had in recent memory have been 2:00. If you jog a 400m at 9:00 pace (which is faster than I usually run my recoveries) that's 2:15: 45 seconds more recovery time. It catches up with you after about 2-3 repeats. By the fourth 800m repeat, I was just praying that the 400s would feel easier because it was half the distance. Even if I had to run them faster.

In reality they felt worse than the 800s.

I ran it on the road so there were some small hills to deal with. Ended up with around 200 feet of climbing. 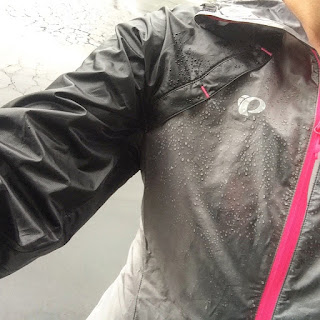 Used my new rain jacket, Pearl Izumi Pursuit Barrier LT Hoody. It works way better than my other jacket. Acutally kept the water out (my other jacket was a complete failure). Legs recovered fairly well from the beating the day before, and I felt like I had to hold back a bit.


Managed to get this run in right before the rain started. Did I mention we're getting a lot of rain? Haven't seen this much rain since 2005. Dialed in the goal 8:30-8:50 pace. Felt like work, but just a bit harder than easy - only 147 bpm average. 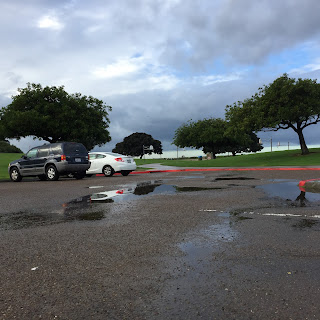 LT work this morning - started this just after the downpour was done. Possibly, the aerobic run the day before made this run feel harder than it should have. The goal was 7:30-7:50 (half marathon pace) for the intervals.

So, I hit the paces but they were mostly on the upper end of the range. So I guess it was still successful but it felt fairly hard. Remembered my HR strap this time and the average was only 157 for the whole workout so IDK, felt harder than my HR data reflects. 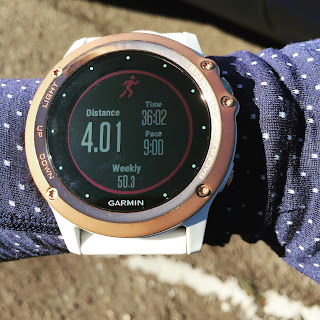 Ran Mission Bay and basically had someone on my tail the whole time. I was waiting for her to pass me but she never did. I started out 9:25 and first mile split at 9:02. Still the footsteps continued and seems like this made me subconciously speed up - yet she was still the same distance behind me. Mile 2 at 8:39. I don't know, seems to me like she was pacing off me. I was happy to turn around at mile 2 so I could be without someone 10 steps behind me. Ended with 9:04 and 9:13. Was aiming more for the 9:15 range so this was a little fast for easy. But HR stayed in (Strava) zone 1 and 2.


Question mark on the distance because I was so not in the racing mindset that when I stopped to loosen my shoe (which, if I were really "racing" I would have just sucked it up and dealt with the it; not wasted precious seconds on a slightly uncomfortable shoe), I stopped my watch? I've never done that in a race. Then proceeded to forget that I had stopped it until mile 2 when I checked my watch. So from 1.34 until the 2 mile marker, no GPS data.

Anyway, Pam and I started with the 1:40 group but right away, I knew (a) even if I managed to pull 1:39:xx out of my ass it was going to be very ugly, (b) I was not interested in working that hard. I had the two hard workouts this week (so, no tapering for this). My mind just wasn't into it. So I (and Pam) pulled back. I ran the first 9-10 with Pam, and then did a little drop-down/progression for the last bit, hitting 7:40s for the last 3 miles. I have a feeling my Garmin overall pace was probably under 8:00 but since I spaced during mile 1, not sure on that data. Official finish time was 1:45:23, average of 8:02. I was having a full on conversation with the WCRR coach in the last stretch when he ran next to me. I had lots left. But happy to say as I write this on the following day, I have no soreness. So, I think I'm good to do the other hard workouts this week other than shifting it a day forward (taking today easy). It's also nice to see that a 1:45 half felt fairly easy; I think that MP of 8:00 is still where I'm at (i.e. I haven't lost much since CIM). 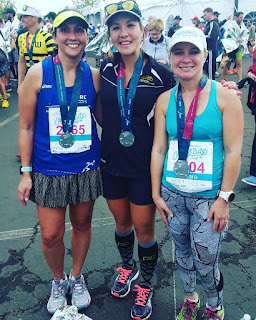