With Bulldog 50K coming up on the 25th, and the Vista Half Marathon originally scheduled for 8/11 postponed until freaking 2013 (so annoying), it opened up the weekend for a trail race I had been eyeing. Dirt Devil Racing's Stairway to Heaven 15K.

Now, when I registered, we weren't in the thick of a heat wave, so, I figured it would be hot since it's August but manageable, and that would be good Bulldog training. The past two weeks here in So Cal have been fairly miserable. It's been close to 90 and the humidity… it's like East Coast style shit. I compared Thursday, the humidity in Oceanside and the humidity where I grew up in coastal Massachusetts. Same. Exactly the same at 62%. In the morning here it is over 80%. So it's pretty uncomfortable. It's downright awful if you've been babied by Southern California for many years (going on 12 years for me). So it didn't really make for good race conditions.

This run is held at Mission Trails Park in Santee, which is a bit inland (if you’re familiar with San Diego County, it’s also known as “Santucky”). Pretty close to “The Big Box” (El Cajon). And it's generally a bit hotter there. I parked around 6:10am and it was already 75 degrees.

Within about 10 minutes, I find out there was a porta-potty snafu wherein the contracted company dropped them off at the opposite end of the park. Awesome! So there was one flushable toilet, and one extremely disgusting porta for like 400 people. I lucked out and managed to get in the line of the flushable one fairly early on. Due to the heat – the race director could not delay the start of wave 1 longer than 15 minutes (smart). So, some folks may not have made the first wave or perhaps started the race having to "go".

All the pictures, I have shamelessly lifted from the Bonita Roadrunners who were an awesome group of folks. Part of me wishes we lived down in south county, because I’d totally join their running club. The person taking the photos must have been close behind me because I am in two of the pics. The blue tank, hat, and orange shorts. 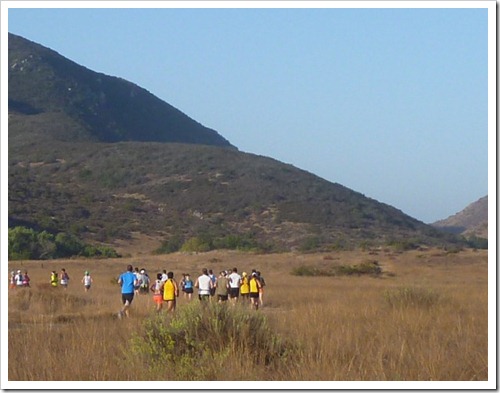 Seeing as it was toasty, already, with not a cloud in the sky, I knew I was taking this race slow. Like a trail training run. The race directors had thrown down the gauntlet of "break two hours, qualify for entry into the 2013 Dirt Devil Invitational Marathon." Prior to the heat-wave, achieving this seemed like a non-issue. At the start line, I wasn't so sure anymore. At 7:15am we took off. Somewhere in mile 1, my asshole Garmin decided it didn't need the satellite connection anymore and just shut itself off. I looked down probably around .8 miles in and it was just showing me the current time (i.e. 7:21am or something). So I had to wait for it to find the satellite. Again (apparently, it only tracked .11 miles before losing it). Reset, and start again. So I was somewhat at a loss for most of the race as to how much I had left to run or my elapsed time.

Within a few miles, we hit the first ridiculous hill at the power lines. No one was running. No one. Seriously, it was hard walking up that hill. Some people just straight up stopped and rested. WTF. Finally we get to the top and we can actually run. I remember very little of the sequence of events during this race, other than:

1. Garmin loses signal. Cursing.
2. Power lines hill
3. Aid station where I put ice in my hat and sports bra
4. Stopping to walk for a bit and suddenly finding myself in the fetal position playing in the leaves*

*First trail running spill for me. And man, did I feel stupid. I was thinking to myself: “Let me just take a little walk here. It’s hot, I’ll take a little breather” and suddenly it was Stop-Drop-And-Roll. Luckily, I had very very minor scratches (almost none) and no one was directly behind me so I didn’t create a pile up.

5. Thousand Steps or Stairway to Heaven or Are You Seriously Telling Me We’re Climbing Up There?

Now, the race description mentioned that parts were more like a hike than a run and I remember thinking “yeah, ok, whatever.” Um, when the winning female is slower than a 10 minute mile for 15K, you know this shit was ridiculous. We hit the first rail road tie (i.e. “step”) and someone mentions they can see where we are going. One of the chicks curses. I keep looking up and around but I can’t see what they are talking about. About half way up (everyone is walking, btw), I finally see the trail of people. 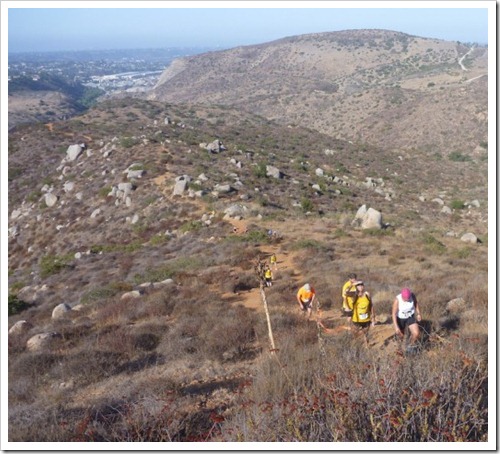 See the trail way back at the far end of the pic? We came from there. See how tiny the people are in the back? 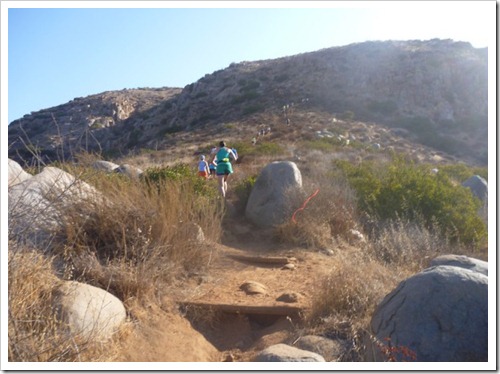 We finally get close to the top and in classic Dirt Devil Racing style, this crazy chick was at the top, cheering for us: 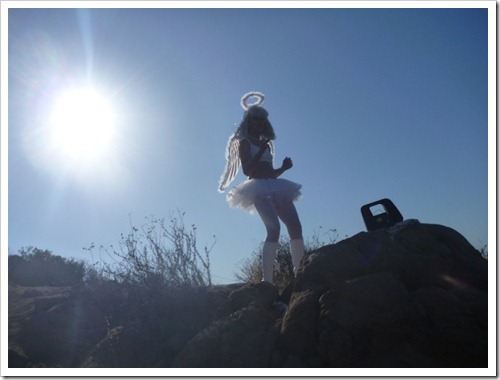 Shortly after we meet the angel, the girl behind me loses her breakfast (it was a tough climb in 80+ degrees).

We had to climb over rocks (I had to use both hands to pull myself up and over), like we were bouldering or something. This is not running. 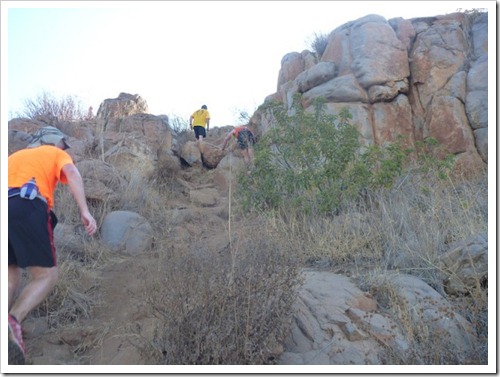 With no idea how much time had elapsed and having to climb this insanity, I was thinking that the sub-2 hours might not happen. The final few miles included running down the power lines hill which was kind of scary, but I threw caution to the wind and flew down it. It felt better to just run down the hill in a barely controlled manner than waste a ton of energy trying to slow myself down. My quads weren’t happy with me the rest of the week, but whatever.

At the second-to-last aid station, they were already short on water and we were the first third of the runners. Not ideal. I took a little bit for my bottle (after I was almost told I couldn’t, so, I was really taking the bare minimum I needed) and took off. The last half mile, I sort of didn’t believe we were close to the finish based on their last race that was well over the supposed 13.1 miles. So I kind of trotted it in until I could actually see the finish line. I crossed and then asked some dude what time he had finished so I could try to figure out mine (there was no running clock displayed). It turned out I finished 1:58:52. So at least I hit that 2 hour mark. Considering the winning female was 1:37 (and these races generally attract some pretty fast runners), I didn’t push it hard, it was like 85+ degrees by the time I finished, and we climbed two insane hills, I am fine with this. And hopefully this will be good heat and terrain training for next weekend!

Even with the portajohn problem, the heat, and the water nearly running out, it was a good race. This is my second event with them, and while both had issues, there is something fun and endearing about these race organizers. They put on a fun race, it’s reasonably priced, good shwag, and just an all around good time. Definitely recommend as long as you are cool with running slow and getting your ass beat by the trails.