I spent many months fighting the hype: "OMG the Kinvaras are the best shoe everrrrrr!"

I tend to be very skeptical of any product with excessive enthusiasm surrounding it. In January of this year, my second pair of Ravennas (first edition) were coming due for replacement so I hit up Road Runner Sports. They did not have the Ravenna 2 in my size but the salesperson brought out several models to try - the Asics Neo, Brooks Launch (which ended up being too big and they didn't have the smaller size), Saucony Guide, and... the Saucony Kinvara 2. 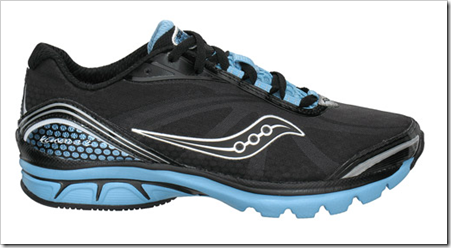 I wanted to not like the Kinvaras. Really. I wanted my cynicism confirmed. But on the treadmill, they felt pretty good. Yet, I didn't get them. Finally about a month later, I found a good deal on them (less than $70) so I picked them up. They have a 4mm heel-to-toe drop so, they are on the "minimalist" end of shoes. And super light at 6.6 ounces. Like every internet source suggested with low heel-to-toe drop shoes, I eased into them. Starting with 3 miles, then 4, up to 6 miles, only using them once a week. Truly, I did not jump into the minimalist shoe thing so, I really cannot explain why with 123 miles on the shoe, they finally decided to screw me over.

Things started getting funny with these shoes about a month ago (I had nearly 100 miles on them at that point). I ran a 5K on the track (McMahon Masters Track Meet in San Marcos). The next day my calves were crazy tight and sore. I continued using them once a week for my one speed workout. Then two weeks ago, I ran the San Diego Blood Bank 5K in them (wherein I again narrowly missed breaking 22, coming in 22:01. No chip-timing, and Garmin says 3.14, so, yeah, I know I ran sub 22, but it isn't official). I then ran an easy 12 miles in my Asics DS Trainer around the harbor.

My calves and Achilles were so angry with me. My left shin was also pissed off because my tibialis anterior muscle was doing all kinds of extra work due to my calves being all messed up. I spent all last week, stretching, icing, rolling, sticking, stretching, icing, compressing with ace bandages (because socks weren't tight enough). Skipped a longer mid-week run. It's still not 100%. But I have only run in my standard trainers with 10mm drops.

So, I guess what I'm saying is, I officially don't buy the hype. This minimalist trend is not for everyone. Is the Kinvara a good shoe? Well, I liked it for a while. But really feel like I am not built for this shoe. And I know it isn't because I "jumped" into it - I eased into it. And I know it's not a matter of not having strong feet, because I do (I have excellent single-leg balance, and easily pass the "pick up a pencil with your toes" test. And I don't over-pronate much on either leg).

I think there are a number of things at play: (1) it seems like the shoe breaks down quickly thus why I started having issues around 100 miles, (2) it's quite a "soft" shoe so, that can aggravate muscles and tendons for certain people (which, apparently, might be me). I have read forum posts of people wearing these shoes for 500+ miles! I would venture to say these people are either very light runners and/or have a very efficient stride. I don't think the average run-of-the-mill runner fits this profile. I'd be curious to hear from any other Kinvara owners out there on what they think of the shoe.

For me? They are permanently in retirement. I am not chancing it again with them and risk an Achilles injury (or worse, tibial stress fracture from an overworked anterior tibilalis muscle).