Let’s see how fast I can dump my thoughts into this post.

Shortly after I committed to pacing O2O and deemed it a really long training run, I decided that if I was doing a 26 mile training run, then I could probably hack a 50K. I have no idea if this logic is really sound. Somehow I doubt it, but we’re runners. We’re often stupid about races and realistic goals.

I went beyond this and decided that it wouldn’t be a “real ultra” unless I did on a trail like every other ultra-runner out there. Which in Southern California = lots of hills.

About an hour north of me is the Harding Hustle 50K (15K and 30K also) on July 7th. After I registered for this I figured maybe I should to run some trail races since the last one I did was in 2003 - a half marathon around Vail Lake in Temecula. Might be a good idea.

So I got myself some trail shoes (Brooks Cascadia 7) in a fairly ugly color combination, some Dirty Girl Gaiters, and registered for Dirt Devil Racing’s Cougar Half Marathon.

The race was a week out from pacing Ojai; I wasn’t sore but I would strongly hesitate to say I was in any kind of racing shape. I had planned this to be a test run. Just go out there, run a bit harder than easy, get some longer trail running experience.

Then I got the race information email and they threw out this little diddy in the course description:

Why must they taunt me with such a reasonable challenge?! Even on a hilly course, I can break 2 hours (case in point, when I was running overall slower, 2011 Highland YMCA Half Marathon - 1000+ feet of climbing), so this seemed entirely doable and within my parameters of not putting out a “full racing effort”. And out the window went my completely-for-fun trail run.

The race was to start at 7am - I arrived at 6:05am to find that the County of San Diego had not opened the access gate to the parking lot like they were supposed to, prompting the race directors to line us up until we could get in. Thanks to this snafu, the race started about 40 minutes late. Luckily the weather complied with June Gloom that didn’t burn off until 9:30am.

For the most part the race went well. 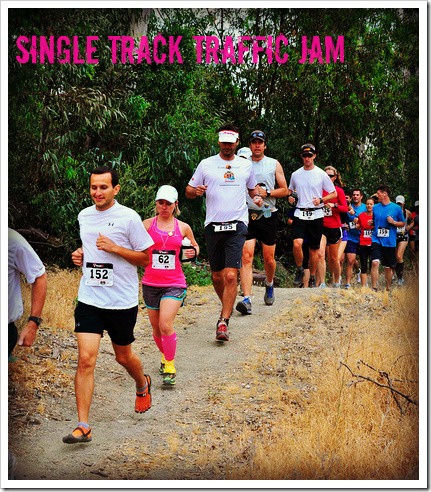 At one point I was contemplating rattlesnakes and how I would highly doubt any would be dumb enough to come out on the trail with 300+ runners pounding the dirt. Then I wondered if, like humans, rattlesnakes could have mental illness and just defy reason, logic, and instinct. Mentally ill rattlesnakes. I think of weird things when I run.

There was one bitch of a climb - Cougar Mountain - we had to crawl up twice. The front side of it wasn’t overly steep. I had a few brief walking spells towards the top when the trail was steeper. Going down the back side was crazy - it was fun but at times I worried I would fall on my face. Climbing up the back side on the way back, on the other hand, was pretty brutal. Lots of walking as walking was only slightly slower than running.

I was working only as hard as I felt I needed to get the sub 2 hours. I knew I was cutting it close, but that I could pick it up in the last mile and make up some time. 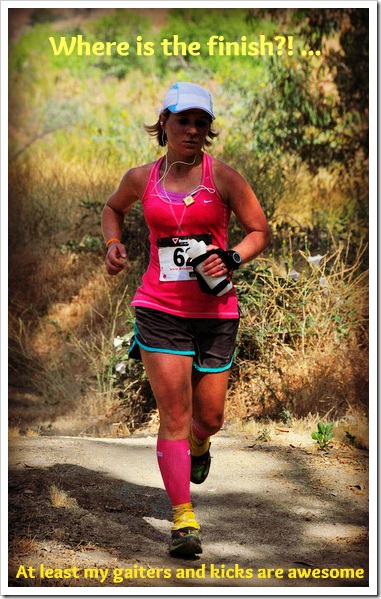 Note Death Mile #9. Also note the “I don’t give two shits anymore” final .67 miles – slowest pace of the race (aside from the hill climbing).

Apparently, it was known the course was long. It wasn’t mentioned in the race details but later, in the results blog post, the author wrote that it was 13.3 miles. However, I’ve never seen a Garmin be that far off before (.37 miles?). And I had one of the closer mileage readings. Other runners I talked to had 13.85 and 14+ (which seems way off). I think the course is actually somewhere between 13.5 and 13.75. Had I known this I would have either (a) decided to run the whole thing easy, or (b) actually race it and give myself a fighting chance at breaking 2 hours. I am somewhat annoyed that the course was known to be 13.3 miles, yet it wasn’t mentioned until after.

Anyway, this race left me feeling slightly scared about the Harding Hustle. But I still think I can make the cutoffs. If the heat doesn’t bury me.

My Cascadias and Dirty Girl Gaiters worked fabulously. I highly recommend these gaiter thingies for keeping crap out of your shoes. I still got copious amounts of fine dirt that crept through the forefoot of the shoes and my socks (very dirty post-race feet), but no rocks, thorny dried grass spikey things, etc.

I am not, though, sold on the handheld for my ultra effort. The handheld kind of makes me nuts. But the fuel belt bottles are apparently a huge pain in the ass for ultra aid station refilling. As if I need to be buying more gear, but it almost seems like I need a runner-friendly hydration pack (i.e. Camelbak)? Any ultra runners out there who might be reading with an opinion on this?