Ojai to Ocean Marathon: Foray into the World of Leading a Marathon Pace Group

When I found out Compete Green’s Ojai to Ocean marathon was sold out shortly after Ragnar (I had the long mileage week I could use as part of marathon training, so I figured it would be good course to try to knock some more minutes off my marathon PR), I signed up to their wait list. About 2 weeks before the race, the directors sent out an email about the wait list (that it may open up for a limited number of slots) and that they were looking for pacers, including a 4:10 pacer. For whatever reason, it sounded like the perfect idea. I would then use that as training for some other race or something (*cough*trail ultra*cough*). About a week later they opened up the wait list, first come, first serve. Had I put in more than a 16 miler in the 4 weeks prior to race day I probably would have been annoyed because I obviously wasn’t going to renege on my pacer commitment. In reality, I wasn’t going to be PR ready by June 3rd. After some pacer volunteer juggling, I ended up assigned to the 4:25 group (10:06/mi pace).

With the no dog sitter situation, it became clear it was going to be logistically painful to drag the Husband with me so I ended up flying solo. But not totally solo. My coworker’s long term girlfriend was running the full, along with Sarah, Nicole, Danica, and Mason from Nuun. It was pretty funny that nearly 3 hours away from home, I knew quite a few people running (even some SDTC runners from Tuesday night track).

I checked into my hotel Motel 5+1, opened the room door to find it wasn’t actually vacant. Get another room assigned. This one was vacant but the shower was dirty with some weird machine grease like spots. I had no desire after 3+ hours of driving to deal asking for another room because, frankly, I didn’t know what I was going to find on the third attempt (Dead body? Scary homeless leprechaun?). I mean, there were several shady looking types milling around the parking lot. I dropped my crap off and headed to packet pickup where I ran into Nicole and her hubby, Mason, and my coworker. I made plans with my coworker+gf for dinner. 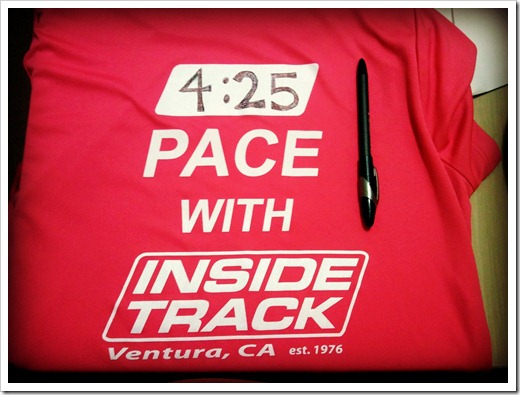 Around 8pm after the marathon fundraiser pasta dinner, I reluctantly made my way back to my craptastic lodging. I had picked up a big bottle of local Pale Ale at BevMo to complete my carboload preparation and found that my hotel actually came through for me in the form of a bathroom bottle opener! 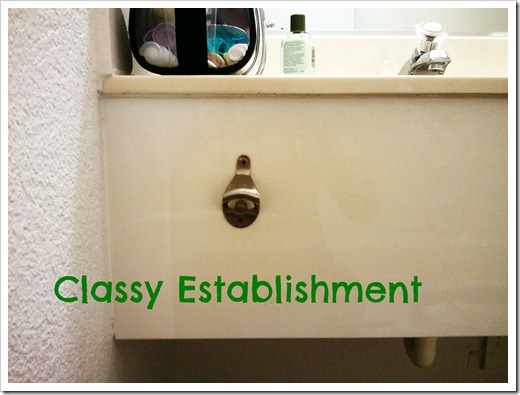 Before I hit the sack, I actually took half a dose of a sleep aid knowing that the noise level outside might not be ideal (which turned out to be true - I woke up several times to all kinds of weird noises). 3:15 am was my wakeup call. At 4:30am I was the first customer served at Starbucks (apparently no medals are given for that. WTF). 4:40am I was in the line for the fairgrounds. It took the better part of 15 minutes to get in and $5 for parking (which we had been told at packet pickup would not be manned, thus free). As I was getting ready to go, a runner was asking everyone in the vicinity if they had spare socks. Oddly, I did. I had an extra pair of running socks in my purse from an RRS shoe shopping visit. I was a little morning-grumpy-cranky so I mumbled something about this being “weird and random” as I handed them over, and when she wanted to pay me I wholeheartedly refused (for my shitty Walmart Danskin socks? No. It’s fine). After the race. though, I found a thank you note with money (!) shoved in the car door handle. I wish I could find her and return it! Anyway, I hope they didn’t give her blisters. And that she had a good race.

After getting bussed up to the start, we found a decent number of porta potties with a reasonable wait (maybe 15 minutes). Wouldn’t have hurt to have had a few more since it seems some of the shuttles behind us might have been cutting it close with the 6am start. They announced the pacers and told us to make our way into the crowd announcing our finish time. I wasn’t sure how much self-regulation of paces was happening in the absence of corrals so I had to ask around. One dude was kind of full of himself as I was going through this process, snarkily telling me to move way further back. As if he is some elite or running sub 3 or something. This whole slow-versus-fast marathoner BS that some runners seem to have is so not attractive.

I finally settle in a place that seems reasonable based on the runners I questioned around me. And within a couple minutes of yelling out my finish time I had about 5 people around me, asking if I planned to run even splits, etc, etc. So my fear of having no one to pace did not materialize. Thankfully. I told them I planned on running a slightly negative split.

We started without a horn or gun, or anything, so it was a bit unexpected. Roughly about 10 minutes late.

Because I have the Garmin 110, I don’t see real-time pace. I see projected split time, and sometimes it takes a while in the first mile to hone in. At this point I should have run on feel but I listened to another runner (who earlier had told me she had a bad habit of taking it too fast in the outset) who said maybe we were taking it a bit slow (and my Garmin was still showing around 11:00 pace), so I picked it up a bit. This resulted in mile 1, 9:55. 13 seconds faster than 10:06 goal. Pacer fail already!?

Through a massive stroke of luck, I had a seasoned runner on my right: 131 marathons, and currently paces for the Clif Pace Team 5:00-5:30 (who apparently requires you finish within a 2 minute window, not going over). She told me that she gives herself the first 3 miles to find the pace. She was the bomb. And also from San Diego.

Lesson #1 in pacing: You are the pacer – you will have to find the pace on your own for the next 26 miles. Do not let another runner influence this and make you run faster (or slower).

Lesson #2: Give yourself some time to find the pace. It probably won’t be right on in the first mile. Or even the second.

By mile 3 I felt like I had found the pace, adjusting our speed slower on the inclines in mile 4 and 5. 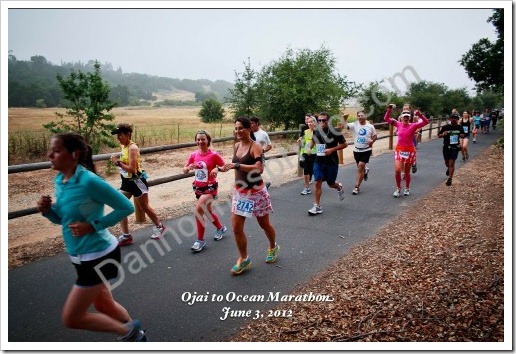 We had a good group of men and women the first 15 miles. I did a lot of talking. Partly to make sure I didn’t speed up. It was extremely difficult for me in the first half to keep my pace above the 10:00, with the downhill. Before we hit the half, my newly found experienced pacer friend (who I think is in the 60-64 AG, based on her required BQ time of 4:25) told me that she could tell she was not in “4:25 condition” based on her heart rate and would likely have to peel off (I’m not going to lie, this made me slightly nervous – having her in the group made me feel much more at ease).

What I find interesting about my memories of this race is that I have little recollection about specific miles and markers, the scenery around those miles, how I was feeling relating to different points, etc. Talking to the group and focusing on hitting the splits took so much mental energy I really didn’t pay attention to anything else. In most every marathon I have raced, I have good recollection of the course. Pacing takes an enormous amount of focus but in an entirely different way than racing. 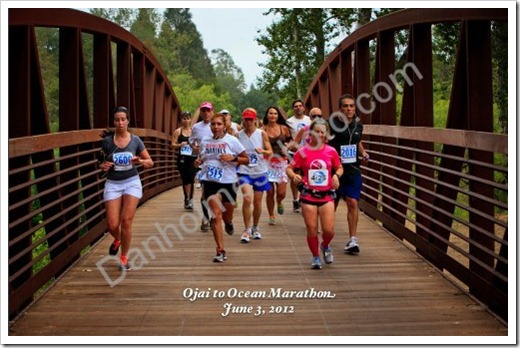 From mile 16 to 18, I started losing people, even though my splits were pretty damn even. Either taking off ahead of me because they used the pace group to slow themselves down, or dropping back because the pace was no longer maintainable. At one point, one of the runners started to hit the proverbial “wall” and another runner asked me how to deal with it. I seriously had no useful answer.

I said something along the lines of “I try to ignore it. Push through it.” Another runner suggested changing speeds. But, really, if The Wall were easily fixable by following some steps, it wouldn’t be called THE WALL. You know? Generally if you’ve hit the wall, it’s because you effed something up (training, nutrition, pace, etc). I felt bad I didn’t have a good answer. Maybe because it was only my 5th marathon. And my 131 marathons pacer friend had already dropped off so I couldn’t pick her brain.

Coming into mile 20, we had a stroke of luck. The course crosses active train tracks and the Amtrak passenger train was going North. We eased up ever so slightly and managed to avoid having to wait for the train and the crossing arms to lift. This is a bit of a course flaw; what if you got stuck waiting for a really long freight train or something? At mile 20, I’d be pissed.

Because I hadn’t studied the course…

Lesson #3: Study the course! At least look at it once!

…I didn’t realize that we were about to hit the ocean. It was a beautiful surprise! I still had about 3-4 people in my group, and one just ahead who was going for her 4:25 BQ (seriously, when I’m 60, can I be as awesome as these ladies?). I tried to offer as much advice as I could. My legs were hurting. I was freaking hungry in a “real food” kind of way (which was so weird – I think the fact that my heart rate was pretty low, it wasn’t hiding my empty stomach hunger). But I wasn’t tired. I knew I was going to make it tight on pace at that point, so that was a relief. But it was pretty brutal to knowing I still had an hour+ left and I couldn’t speed up to make it end sooner. Unless I wanted to be  “Total Asshole Pacer”.

By mile 23, I had lost everyone, save for the lady up ahead who I think was still using me as a pacer, but more to make sure she stayed ahead but not too far and get burnt out. So to keep myself busy and also try to be helpful, I started cheering for everyone. Everywhere. I called across the to the other runners looping back in the last 2 miles. I tried to get people that were walking to start running with me. Sometimes it worked. Sometimes I got smiles and waves. Other times, I apparently annoyed the shit out of people.

By mile 25, I had caught up with the runner going for her 4:25 BQ. Myself and her two sons (who were running her in) talked her ear off, spewing instructions, motivations, information, etc. I knew she was going to make it but it was her second attempt in as many weeks (yeah, she had ran Ogden and missed by something like a minute) so they were hypersensitive to the potential disappointing “Just missed it!” outcome. She pulled away from me shortly before 26 and I continued to keep my 4:25 pace.

I crossed, Garmin time 4:23:47. I actually have no idea what my chip time was because apparently the pacers were excluded from the official results. The first 13 miles were 2:10:54. Second 13 miles, 2:10:42. Ever so slightly negative split. As I ran to the finish, I told the photographer that this was the first marathon I’ve ever finished smiling! (rather than dying) 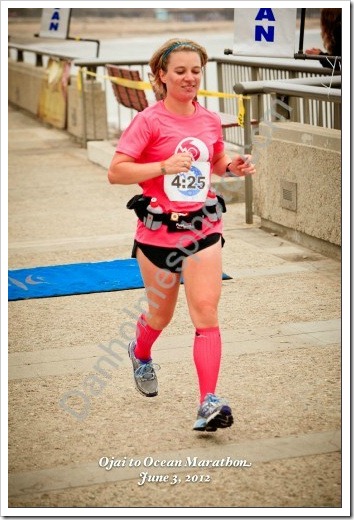 All in all, I really enjoyed pacing. It was such an awesome experience.

If you’re thinking about pacing…