(It’s the day before we drive our last leg home, so, hoping I can remember what we did!)

Technically, it was Springville, UT. And because there was only one coffee shop in the town and it didn’t open until 6am, I failed to get my daily dose until 3pm. Which meant headache. If you are a coffee addict, Utah may not be for you. I showered up after the race and we drove and hour or so to Salt Lake City (with a pitstop in cute Provo for lunch). The hotel in SLC was probably the best one of the entire trip – Little America Hotel. I know weird, name, but super cute, affordable place. 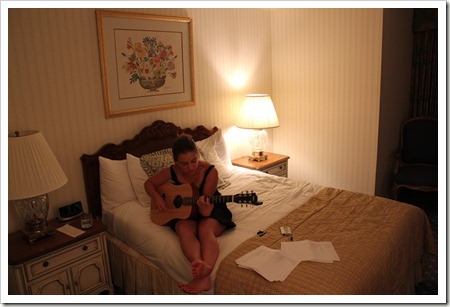 (This is the only pic I have of the room. I thought the Huz was talking pics of each room but apparently this was a combo photo. I brought along my Baby Taylor.)

First to-do in SLC was getting my too-little-to-late coffee (SLC does have a good number of Starbuck’s locations). It was hotter than an armpit, like 97 degrees or something, so I got it iced. We walked over to Red Rock Brewery and then Squatter’s Pub because why not be totally rebellious against local Mormon culture and drink both coffee and alcohol within 10 minutes of each other? Turns out draft beer in Utah? Only 4%. By law. Anything higher in alcohol content must be sold in a bottle. Ca-ray-zee. I think even Bud and Miller are > 4%.

The positive I suppose is that you’ll end up full and totally hydrated before you ever get drunk.

I have a weird fascination with American history. When I saw that we’d be passing close to Promontory Point, UT and that our National Parks Pass covered the entry fee to the Golden Spike, I was all over that like fudge on a sundae.

You probably don’t even know what I’m talking about. 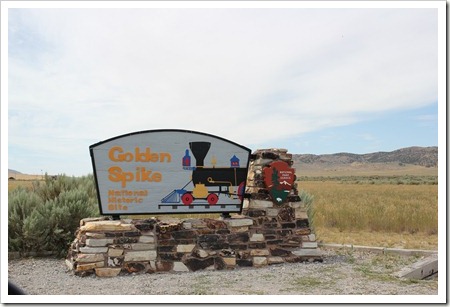 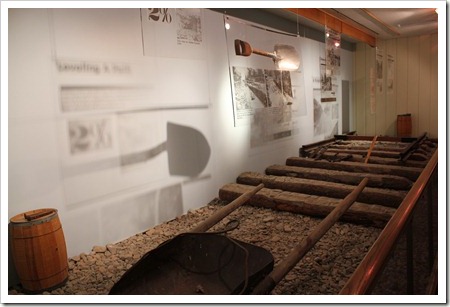 It is the site where the Central Pacific and Union Pacific railroads met in 1869 to create the first transcontinental railroad. (If you are remotely interested, read Stephen Ambrose’s Nothing Like It In The World).

And on to Boise. Where Much Cheese was Consumed.

It continued to be HOT. To the point where I began to question if  a road trip in August was smart. Did you know it’s like 100+ degrees through southern Idaho? Holy mackerel. Seriously. We got to Boise around like 5 or 6pm and it was still nearly 100 degrees. WTF.

I got spiffed up and we went to get some grub. First a beer at the Bitter Creek Ale House which had tons of local Boise brews on tap. Excellent, Smithers! Attached to it was the Red Feather Lounge where I got some smoked trout (awesome!) but beforehand we got a local cheese plate appetizer. It was a shload of cheese. And we finished it. Then my trout plate came and it had more cheese. I’m lucky I wasn’t bound up the next day. If you know what I’m saying.

Oddly enough, we ate zero potatoes during our time in Idaho.

The next morning, before hitting the road, I paid a visit to the hotel gym treadmill and my legs were like lead. However, I do think that the treadmill was partly to blame. It felt like, at lower speeds, I literally had to push the belt. Like I was running through sand. At higher speeds it got better, but then, obviously that was more tiring (and we were at about 3000 ft altitude). So after 3 miles of that crap, I go onto the bike because the treadmill was demoralizing my morning.

Five more hours of driving and we arrived in Walla Walla around 4pm. With just enough time left in the day to start a little wine tasting… 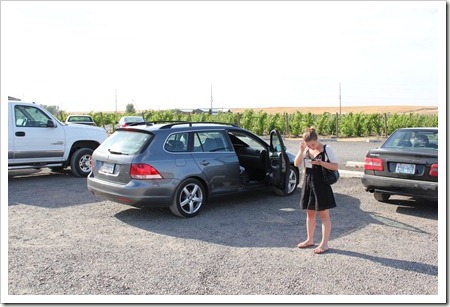 (And that’s all I’ve got for today. I’m still recovering from a massive my huge meal from Wool Growers Restaurant. Will have to put all the Booze Tasting Days in its own post).