I set my alarm for the ungodly hour of 3am. The earliest ever that I have woken up for a race. I really felt like I might be crazy for such a thing but then 2000 other people were running this race and probably getting up before 4am so at least Crazy Has Company.

Just to see if I win the prize for earliest race wake-up call, what is the earliest you have gotten up for a race?

Unlike any other race, I laid all my stuff out the night before so that I could streamline the next morning. I had my latte, toast with PB and banana, took two medjool dates and gatorade along for the ride and left the house as 3:50. Yeah I said Three. Fifty…. AM. So early, the coyotes were out; I saw one up the road – I’m sure he was thrilled I was cramping his style with my car.

I got up to Fontucky at 5am and the place was dead, which is excellent in my book. Got a good parking spot, picked up my stuff, and waited for Sarah to arrive. We hopped on a school bus around 6:10am and arrived at the start, up in Lytle Creek (San Bernardino National Forest).

[tangent 1: did you know school busses now have super high backs? I could not help thinking about the various ways kids could get into trouble with that much seat to hide behind]

[tangent 2: Sarah gets extra bonus points for finishing the race listening to Sarah Smile by Hall and Oates. Anyone who likes old school 70s music gets 500 points. Which buy you nothing. Except some Chacha Props.]

It was fa-reezing. Thankfully I had a throwaway shirt which hopefully at least makes it’s way to Goodwill. I was skeptical that there were enough porta-potties but we actually used them twice in 40 minutes! So apparently, it was sufficient. They even had boxes of GU packets you could grab for the race. At this point I was super-impressed with this race’s organization.

While we were waiting to start, I wanted to get a picture of the San Bernardino National Forest sign to prove we were in the sticks, but this dude was standing in front of it gyrating. We figured maybe he was opening his hips? Maybe? Either way, I passed on the pic since I didn’t want him to get the wrong idea with him Elvis-ing. We didn’t stick in that area long because it turns out Sarah seems to not like bugs crawling on her. It’s always funny when someone several heads taller than you is more afraid of bugs than you are. Hehe. 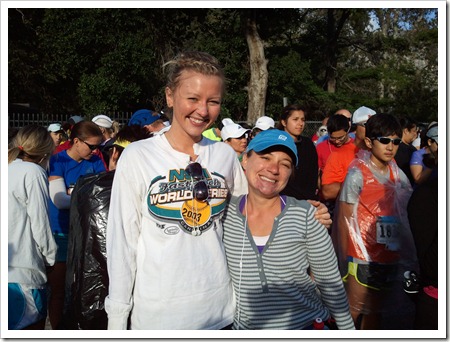 Yeah, maybe I should just superimpose this guy’s face on mine since our cheezy grins are the same. 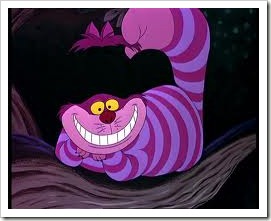 We took off, and the first four miles, my legs protested the descent. I was a bit concerned because they felt like they wanted to tighten up, but around mile 3-4 they gave in and just ran. The first 3 splits, when my Garmin beeped, I literally laughed out loud. 7:28, 7:25, 7:29. I was not pushing it at all. Good ‘ol gravity!

I started eating blocks at mile 4 which was probably 15 minutes earlier than normal. I just felt like I needed it and I do think it helped me.

I’m pretty sure the 10K mark was PR… yeah, just looking at the miles, only 1 was a single second slower than the 7:46 pace I ran at Redondo. Obviously, this downhill stuff is kind of cheaty.

Anyway, I just kept trucking and, MAN, did this race go by fast. There were some parts with a little less descent (the last 3 miles) but we generally were continually dropping elevation. I hit mile 11 and I started paying for flying down – my legs were protesting like it was their job. I was just hoping they wouldn’t go on strike yet.

Mile 12 was kind of ugly, we were still going downhill (103 ft descent) but I could only manage 8:11 (stark contrast to the rest of the miles). Then “Gold Girls Guns” by Metric came on the iPod (seriously, iPod shuffle seems to know the right time to play this song every race) and I started moving again clocking mile 13 at 7:51 (96 ft descent).  I kicked with whatever I had left (or thought, I felt like I could have pushed a little harder) and finished on the Garmin at 13.10 on the dot. Never had that happen before! I did make sure sure to run all the tangents, so, I guess it worked. 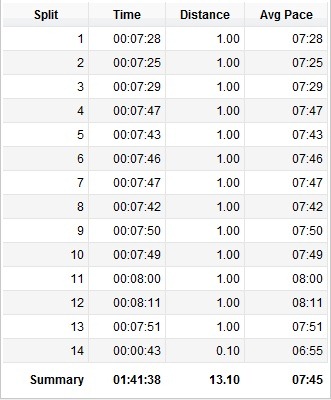 Now, obviously, I can’t run that fast on a normal course. That is just insanity.

However, I did feel very good today which is a bit of a bug-a-boo. It kind of chaps my ass. I expected anywhere from 5 - 7 minutes improvement (last time was 7 minutes less between Long Beach and Snow Canyon) and I’ve stalked  previous year Fontana finishers on Athlinks and they also have that 5-7 minute ballpark from other local races. This time of 1:41:38 is nearly 11 minutes faster than PCRF 5 weeks ago. I am pretty darn certain that I could have pulled a PR (1:47-ish) out of my ass on a regular course today.

My quads starting cramping literally 5 minutes after finishing. They would alternate seizing up and relaxing. It was weird! I am already stiff (yes I stretched!) so I think tomorrow is going to be interesting. If I am able to walk I may hit up a spin class (she takes it easy on the class, for the most part) at the Y tomorrow to work it out.

This week is going to be another resting week before I start up training for the Coronado Independence Day 15K and ultimately the cheater Hobble Creek Half in August. At least I have a baseline now of downhill to downhill. I have decided that my stretch goal is to break 1:40 for that course. That is less than 2 minutes improvement. Doable, I think.

I’ve been up since 3am so it’s time to relax, have some brews from the kegerator, and hit up the knitting. I know Party Animal over here.

Good luck to all of you running San Diego Rock n Roll tomorrow!