Err… Fourth is the New Third?

Yesterday afternoon, as I was getting dressed to go to Pizza Port (with my new $7.99 Old Navy summer dress score), I saw my still-not-put-away-because-I-am-lazy Breezin’ Through Beamont race bib sitting on my dresser. I thought to myself, with a twinge of slight bitterness, that the race folks never did send out the age group awards and probably never would. I go out to the car and The Husband is walking back from the mailbox with a package in his hands.

Turns out it’s from the City of Beamont. They had a letter apologizing for the lateness of the results (they had no awards ceremony the day of the race for anyone, not even the winners, because the timing company apparently didn’t have their shit together), and that they had finally compiled the official results. Inside the package: 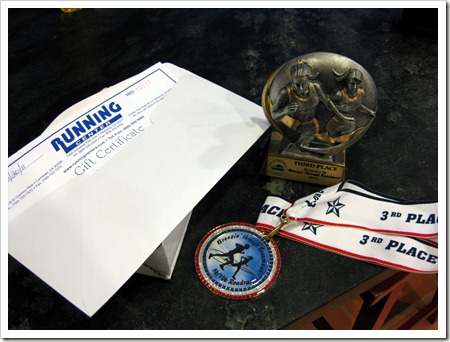 I could have sworn I was fourth. I checked the results again this morning, and, I still have not been able to roll back time to magically get that third. Still fourth. What’s even stranger is I can see how, on race day, they could make a mistake. But more than two weeks later? After the shpiel about taking time to compile the results?

The only thing  can think of is that whoever was ahead of me, perhaps, wasn’t really racing, or something. Like, they excluded themselves for whatever reason. There was one chick who kept stopping and walking and then taking off, and she had a shirt that read “coach” on it. She did come in ahead of me (which, again, made me feel fabulous that someone employing a run-walk in a 5K beat me), so, maybe she wasn’t really in it? Maybe she took herself out of it?

Anywho, time to try to get motivated for my long run (14 mi) this morning. It’s not going run itself.