I was going to do a post recapping what y'all have missed with my ho-hum day-to-day stuff since mid-December (if anyone is still reading this sporadically updated blog and give a crap) but I have to post about something else instead because it’s baffling me.

As you may know, I have been swallowed up by the Etsy monster and have been knitting and crocheting up an OCD storm, hawking my tchotchkes. For whatever reason, of the 34 items I have sold since late November (which are varied in color and styles), there is one item that sells over, and over, and over again. Like the universe has converged upon the importance of having this item. 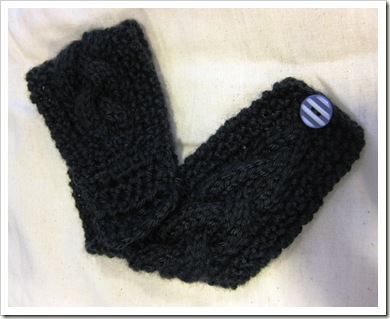 Seriously, in the last two weeks I have sold five of them. I just posted the last one about 4 hours ago and away it just went. Another sale of three items to one customer were the result of clicking through the black cabled ear warmer listing. It must have a special aura. Maybe it promises free crack or something. I don’t know.

That or ladies are trying to match their black winter coats.  I’m going with the magical. Five in two weeks is just too weird.

For the runners who might be reading: I ran the half in Irvine this past weekend after only running an 11 mile run two weeks ago, the longest run since early November. As I expected, I was somewhat miserable the last two miles but still managed to pull off 1:52:11 (I was on pace for sub 1:50 through mile 11). I figured doing a race would force me to get the miles in and I couldn’t get lazy and do fewer miles. Next up is Carlsbad on the 23rd. A coworker’s friend couldn’t run it so I coughed up the $20 transfer fee and the $80 race fee and decided to go for it since it’s just down the road from me and, apparently, the bling is pretty nice. Plus. everyone and their grandmother is doing it, so, figured why not jump off the bridge with everyone else.