I’m taking a break from being thoroughly disgusted by the Patriots. I am having a hard time repressing the profanities that are working their way to the surface.

I don’t know that too many people have reviewed this race as it is small, but it falls along the same lines as the Balboa Park 8 miler in August. Small, well run, cheap, and, well, a bitch of a race. This the first time I have run half marathons in back-to-back weekends. My legs felt recovered enough from the last one that I figured, “what the heck”, it’s only $40. And I need to do more hills in my long runs so this’ll be good training.

Around mile 4 I wondered to myself why I was again paying money to be tortured.

It was hot. By the time I finished it was 70-75, dry, and sunny. The course begins on an uphill – right away you are like “WTF?”. It’s about .3-.4 miles long, and then you take a right and continue going uphill till about 1.3-1.4-ish. This is where I was telling myself “Don’t go crazy and get pushed to go faster with these rabbits– they will bonk before 6 miles at this pace. ” And I was right. I had at least 3 females ahead of me, maybe it was 4, and I just told myself that I needed to conserve my energy. I ended up passing 3 or 4 by mile 5.

You get a mile of downhill (my fastest split of the whole race, 8:12) there and then you take a left and climb. And climb some more, and then some more. There’s a little downhill around mile 5 but I would have taken flat since I knew I was gonna pay for it on the way back. The turn around is up a hill at mile 7. At 6.5-ish I said “Eff it, I am walking and drinking some gatorade and eating a blok.” It was the only time I took a little respite.

The rest of the race wasn’t too bad since it was downhill and clearly the 13 miles I did last weekend helped me not bonk out early. I passed quite a few people, and was only passed by one or two guys. My time is nothing to write home about, but given how much of a pain in the ass the course was, I am fine with it. It was a bit short, I got 12.94 (not complaining about that because the finish? Ended on an uphill. I was ready to be done.) so I think I wasn’t even under 9:00 pace. My time was 1:56:32. But I was still the 5th female – there were 103 people in the race, so, probably 5th out of 50 or something. Not too shabby. If super-fast Mary Akor hadn’t shown up I’d have been fourth and first in my age group. Instead I was 5th and 2nd. Eh, given the heat and the course, it’s was a good effort for me.

Here is my bling: 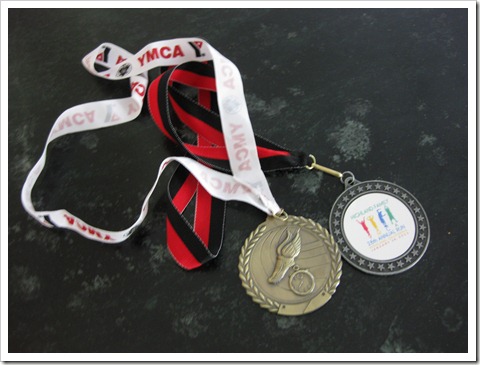 Alright, time to go yell at the TV now.