After six dead-to-the-world hours of sleep, I lay there in the hotel bed for 3o minutes half-asleep, wating for my real alarm (rather than my husband-4am-alarm) to go off. I still had a belly full of gumbo (or at least if felt that way) so I knew that, for the first time in my 33 years, I would be drinking the brewed-in-your-bathroom-hotel coffee to get “things” moving.

Turns out that the Astor Crowne Plaza has some decent coffee – specifically the local CC Community Coffee, around since the WWI era. If only they’re commitment to putting the customer first was also as good. The night before I asked the front desk if we could get late checkout since it was impossible that I could be back and showered by 11am with a 7am start on a point to point course. She acted like I had asked for a free night and said that noon was the latest checkout they could allow. Noon. Really. Still, not enough time to finish, get on a shuttle, get back and shower.

After drinking a cup of coffee and eating a banana I decided that the Husband did not need to meet me at the finish. I didn’t want him checking my purse with the bellhop, nor did I expect him to carry my purse around New Orleans the entire morning. I am certainly not that emasculating or high maintenance.

I showered around 5:15 am since it wasn’t clear I was going to get to shower after the race, figured I might as well get as clean as possible beforehand. Decided I should drink the second cup of hotel coffee (again in the interest of clearing out the gumbo), had a PB and bagel thin sandwich, and mixed my gatorade for my fuel belt bottles.

Shortly before 6am, I was walking to the Starbucks in the Marriot off Canal. Yes, a third cup of coffee (soy latte specifically). Hit up their restrooms and then walked a few blocks to the start area. It was around 50 degrees, so I had on a plaid flannel which I decided to bag check (which turns out to be the smoothest post-race bag check retrieval ever). I made one visit to the portajohns – the lines were long – then walked over to my corral (#6).

I had heard that RnR races had strict corral policies, but this one totally did not. They did not check bibs at all. It was around 6:45 and #6 was already pretty crowded, so I didn’t even try to get toward the middle/back of the corral. I started chatting with another runner who went through the trouble of changing his corral, officially. He was shooting for a 3:55 and said that he was notorious for going out too fast. I almost suggested he run with me, but decided that I didn’t want to screw him up.

Our corral went off maybe 7 minutes after the 7am start which was pretty quick, and being at the front of it meant it was a bunch of rabbits. Including the dude I had chatted with before the start. Holy smokes, that guy took off like a bat out of hell. I wanted to run after him and tell him to slow the eff down, but I as trying to get my bearings on the proper pace with everyone else pretty much out of control. At one point in that first mile I looked down at my garmin and saw 6:59 as my projected split pace. Um. No. I put the breaks on, big time.

We took a few early turns in that first mile and I clocked mile 1 on the Garmin, still trying to slow down.

We then hit St Charles Ave which was the majority of the half marathon course. Such a pretty street! Huge old houses, lots of trees. Just gorgeous. I would live there, happily stuffing myself with oysters and crawfish. Anyone want to hire a software engineer to work in New Orleans? I am there.

St Charles Ave was miles 2-8. I was still reeling from the ridiculously fast start, so I was still trying to gage my effort level. But the road felt downhill! Seriously. Around mile 3 I asked a runner if she felt it was downhill. She assured me it was just flat. I was not convinced.

The roads were a bit rough – in need of some repair/TLC. Along the way, I would see mardi-gras beads STUCK in tar in the road. I kind of loved it, though, because it was a reminder that I was, in fact, running a marathon in the heart of the big easy. We doubled back at 4.5 and again, it felt like I was going downhill. WTF. That is not possible. Unless you are grandparents talking about how you used to walk to school in 20 degrees below zero uphill both ways.

I commented, again, about it to another runner and they agreed that it had felt downhill before, but clearly, it must not have been. I don’t even know. All I know is that in this stretch, my garmin would beep, I would look down and see 8:39. It was creepy how steady my pace was.

This stretch also had a band that must have been well-known, locally, because runners were cheering for them, loudly and energetically. Generally, at every band, I paused my iPod so I could listen. Unfortunately, this band landed in the middle of my new favorite race song, Hall and Oates, You Make My Dreams Come True. Yes, I am that dorky. I love me some seventies cheesy music.

We were making our way to Decatur Street the south side of the French Quarter where the shade was hard to come by. But the temps were still cool, around 60. 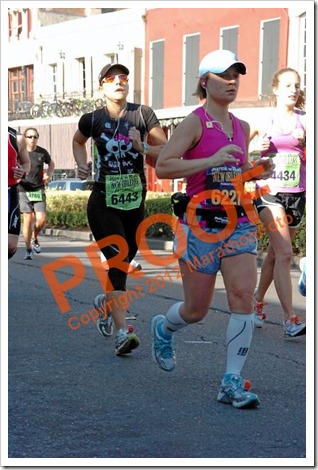 Most of my course pics are from after mile 20, but, they are like glamour shots compared to my Carlsbad pics (view at your own risk. I take no responsibility for any cardiac arrest events resulting from fits of laughter).

The marathoners hung out with the half marathoners for nearly 13 miles, so, while it wasn’t necessarily crowded, it was a little weird to know that most of the people around you were working much harder for the same pace. Kind of threw me off a bit. I chatted a bit with one girl who was on pace to PR – I wanted to tell her to pick it up because her ability talk easily meant she had lots of engergy left, but I didn’t want to be meddlesome.

Short after mile 12, we had the mentally agonizing split from the halfers. I wasn’t really tired or anything, I just knew the discomfort I was in for. It’s like making the conscious choice to be gently tortured for 2 more hours.

I finished off my first pack of blocks and kept trudging along, wondering if I was going to be able to maintain my pace. We ran long City Park making our way towards Lake Pontchartrain. We had a bit of shade in this region but the temps were rising. I crossed the half-way point around 1:53.

Between mile 15 and 16, I caught up with the rabbit dude I had chatted with at the start. Only I wasn’t sure it was him until after I passed. So I didn’t say hi. He would end up finishing 4:10+. Again, clearly going out too fast is not a good idea. Shortly after, I was running along, chatting with fellow runners about the leaders – when we would finally see them (as it was getting close to the point where they should be doubling back).

We hit the lake where it got truly hot. No shade, and the temps were approaching 70. I was leap-frogging with one of the runners from mile 16 until around mile 18 when we just started running together. Because why not. We chatted it up with two runners, one cute, girly runner with braids and a running skirt who totally farted loudly. Cracked me up. It would be the girly-girl breaking some strong wind along the lake.

This lake portion felt like it went on forever. There were some somewhat steep, short overpass/bridge hills which messed with my head after such a complete flat course. Finally, we hit the turn around shortly after 20 miles.

I was working. If I didn’t have my new-found running buddy, I’m not sure I would have had those miles in the 8:30’s. Another stupid hill before mile 22, and we turn to go back to City Park for the finish. An awesome band was playing some local jazzy type stuff which had the perfect tempo for my cadence. There was some shade here, but, it wasn’t much. I was nearly out of gatorade and did not want to use aid stations because I have zero practice running whilst trying to drink from a cup. And stopping to drink seemed like a fatal choice.

The last 6 miles I was hanging on to 8:40 for dear life. Every time I would pass a mile marker, I would take the number of miles left, multiply by 10 minutes, and add to my current time. That was my gage on if sub 3:50 was possible. I figured I could drag my ass through a 10 minute mile, worst case. But until it was true, that 10:00 pace would yield sub 8:50, I didn’t allow myself to slow down. 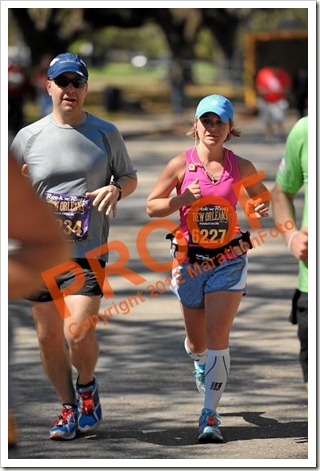 My stranger run-buddy! I finally got his name at the finish. I would not have been able to hang on to my pace without him – running with someone was holding me accountable. If I slowed down, I knew he might call me out on it so I hung on.

Sometime after mile 25, I told him he shouldn’t feel compelled to stay with me. I didn’t want to hold him back from kicking it in. Though he said he was fine, shortly after he started picking it up. I just tried to keep up as best I could. 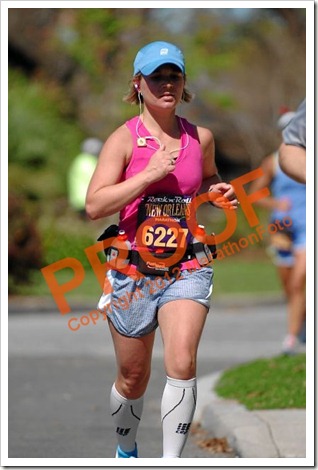 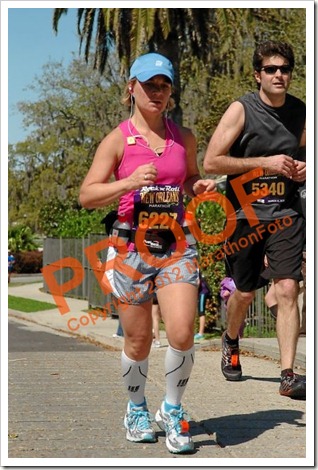 I’m just hanging on. We hit the final stretch and I check my watch – can I squeek in under 3:47? 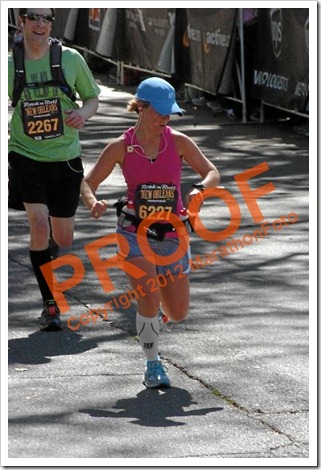 How red is my face!? It was hot and I was definitely dehydrated.

I crossed 3:46:50!!! I was both happy and immediately in pain. Like, instantaneous leg pain. Wow. My run-buddy waited for me to finish (it turned out because he started in corral 5, I actually was 30 seconds ahead of him, time-wise) and we exchanged congratulations.

Checked my phone - Nicole and The Husband had already texted me congratulations! I picked up my stuff, hit the med tent for two acetaminophen, and walked straight to the shuttles, hoping that I might somehow make it to the hotel before noon.

No dice. Meanwhile, The Husband had asked, again, that morning, if we could get more time, and was denied. Again. I get on a shuttle at 11:30am but I don’t get back to the hotel until 12:15pm. He’s waiting in the lobby with our luggage and I decide to make one last plea, in my sweaty disgustingness, that all I want is a 5 minute shower. This front desk person was super nice and says it’s no problem, let’s just see the keys still work for the room. They do. So I haul butt and take the fastest shower ever. Third time was a charm.

We spend the rest of the afternoon walking around the French Quarter, eating raw oysters, and drinking hurricanes. Confirming that I freaking love Louisiana.