Getting Lost in My Own Neighborhood

Trucking up a hill and dodging two-foot weeds, I knew I couldn’t possibly be in the right place. 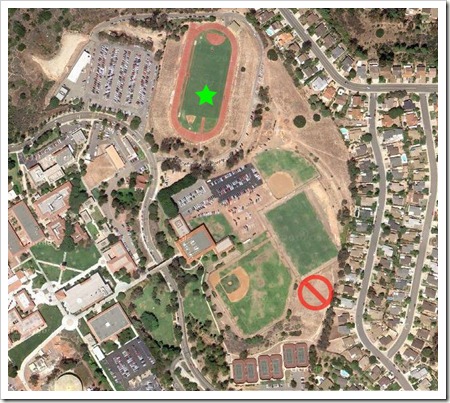 It began last night, after work. I had decided after 2 or 3 years of saying that I needed to find a local track open to the public, that I was actually going to do it. First, I tried to find one close to work (maximize the daylight) – via Google Maps. I found that just a mile or so away, was University City High School. Arrived to find a construction fence with a sign stating that the athletic facilities are closed. OK, then.

Later that evening via Google Maps, I see that the middle school less than a quarter mile from my house has a dirt 400 meter track. I will run on dirt, especially that close. Just as the sun was rising this morning, I jogged over to find that the track and the eight tennis courts were all locked up. I am pretty sure the middle school doesn’t use them much – what a waste! Locals would happily use them.

Not to be deterred, I immediately hopped into the car and drove over to Mira Costa. Knowing that you need a permit to park on campus and not wanting this to turn into a $40 track-finding-failure, I parked in the closest residential neighborhood to the campus entrance and tried to remember the satellite view of how to get to the track on foot. The sidewalk on the one side abruptly ended so I started following a walking path going east.

And then I ended up an overgrown hill of mostly dead weeds. Wondering if I was going to get attacked by an axe-murderer at 7:30 in the morning with no one around.

I backtracked and managed to find a backwards way to the track entrance behind another building. At this point, I was pooped. But, dammit, I was going to get in some kind of intervals.

The last time I ran a lap around a proper track (not the dirt-excuse-for-a-track in Redondo Beach’s Aviation park back in 2003) was 1996. I decided to attempt a 400m. First of all, I have decided I really don’t like my Mizuno Precisions. It’s like running in a shoe shaped from concrete. Kind of unyielding. As soon as I hit 200 miles, those things are getting retired to casual use. Second, 16 years of absence from the track were squeezed down into a sliver of seconds and I was right back to feeling like a mediocre, average high school runner.

So as I ran that first stupid 400 this morning, I was thrown right back into it that feeling of medocrity. Crazy, huh? While I am getting faster, and while I know I am faster than the average recreational runner (heck, next year I need 3:40 for BQ, and I’m less than seven minutes away with a peak-week-mileage of only 42 miles), I seriously felt like a sloth. I could not fathom how I got around the track 3 more times at the same pace in the mile. Which was still slower than 6 other girls on the team.

I think I must make peace with this damn track or I will forever feel like that barely average runner always missing the mark.