2011 Santa To The Sea Half Marathon

I didn’t have any plans to run this race – I was going to run the Holiday Classic again in Loma Linda, but then Schwaggle drew me in with a $38 entry fee. The only unfortunate part of this race for me is the fact that there is no race day pick up (without paying a $25 VIP fee). So we had to drive up the day before – it’s about a 3 hour drive without traffic which meant we had to spend the night. I managed to find a cheap hotel that wasn’t scary in Camarillo right next to the outlets (which we didn’t manage to avoid the next day but wallet damage was minimal).

Pick up was a cinch – the tech tee is cute and we got random good stuff in the goodie bag including a pack of shot bloks and gu chomps. After that we met a friend for dinner and managed to check out two local craft breweries in Ventura (beer=carbo-loading).

I woke up around 5am for an 8am start (yeah, kind of early but I don’t like rushing around). The race is point-to-point, and starts at this semi-historic 101 Landmark – a massive Santa Claus statue right off the freeway.

Thus the name “Santa to the Sea” because you literally run from the Santa to the ocean in Oxnard.

I had The Husband drop me off at the start rather than taking a shuttle. Which was good because it was FREEZING so at least I got to wait in the car for a while rather than in 40 degrees. He finally had to leave and I waited about an hour walking around aimlessly to keep from freezing – I even ran a bit as a warmup. They had the UPS bag check (awesome) so I held on to my sweatshirt until the last possible minute.

After sadly parting with my sweatshirt, I made my way to the chute. There were corral guidelines that everyone pretty much followed – no walkers in the sub 2:00 corrals that I could see. I found myself right in front of the 1:50 pacer and told him I had to stay ahead of him!

This race is pretty much flat. According to Garmin there is 55 feet of climbing and 112 feet of downhill. There were only a couple hills I remember – one overpass and then another little guy. Most of the 57 feet of downhill comes in the second half.

Err, ok, at this point I figured it was just excitement. It would ease up.

Again? I thought I was running slower.

At this point I felt great but I was really worried about these splits. These splits are fast. I don’t run 4 consecutive 7’s. Sure it was flat as a pancake, but still.  I ate my first blok here and continued to eat one shot blok every odd mile.

Finally! Seriously when I saw those “8” miles I felt a little relief that I had managed to ease up. Even though it was only 6 or 7 seconds slower. We had started running through neighborhoods and were approaching the Oxnard city center. The spectator support was awesome! I had a smile on my face most of this race. For such a small event, I was impressed.

Again, this had me concerned. Seven of the nine miles I had done were under 8:00. I have been known to start sagging at mile 10 after going out too fast. SO, yeah, I was worried. It was around this point I started noticing who I was running with and wondering if maybe I could catch some of them. Good mental distraction.

Yeah, WTF. I do remember this mile feeling hard. I also remember leapfrogging with two women so maybe that made me push. We had pretty much made it to the coastal area and were making our way south to the finish at Embassy Suites Mandalay Bay. I told myself that I just had a 5K and keep the miles under 8:00!

Hurting a bit here. We hit the beach path and I passed a guy I had chatted with at the start – we exchanged words of encouragement and I kept trucking. It was difficult to get out more than 3 or 4 words. I had one more female ahead that I thought I might be able to catch.

At this point I knew I was going to smash my non-Fontana PR. But the question was how much energy would I have left to give in the final mile.

The finish was kind of annoying – we had this narrow path to run down between orange cones and school buses. Only fit one person and I kind of got stuck behind this older guy. I decided to quickly swerve outside the cones to get around him. I could tell he wasn’t pleased but whatever. I had managed to pass the last chick earlier in this mile and this dude was not going to sabotage my effort.

How I had any kick left, I don’t even know. The announcer read my name and actually pronounced my first name correctly! This resulted in a huge grin spreading across my face even though I was sprinting (dying). The little kick eeked me under the 1:44 mark with a finish of 1:43:56 - 7:56 pace.

Some bad finish line photos to laugh at: That’s the dude that I had to swerve around. Sorry, man, these short legs were on a mission. 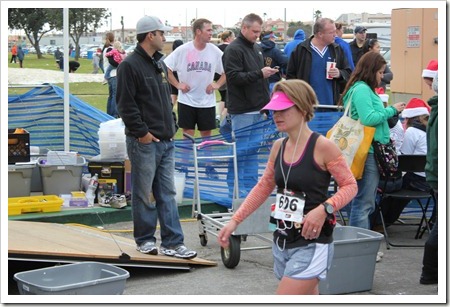 (Yeah,  I chopped my hair off last week – donating it to Pantene Beautiful Lengths)

This race was very well run. They had three aid stations with GU. There were plenty of water stops. Mile markers for all miles (most were accurate – except mile 12 which freaked me out – it was at 11.8 miles). Food at the finish was plentiful – coconut water, a jamba juice “apples & greens” drink I’d never seen before (but decided to drink because, hello, free?). Medal is cute and made in the USA (not China).

As for my effort – I am pleased. Sure it was an easy course but I can’t classify it as a Fontana-Easy. It is pretty much flat. 57 feet of downhill over 13.1 miles isn’t very much. So, I consider it a real PR. Yay!