Last weekend I completed my longest mileage week ever – 42 miles. Not even while training for the LA marathon in ‘03 did I run over 40 miles that I can remember. As one would expect, I am feeling it. Thursday evening I played Old Woman and tweaked my back picking up a loaded laundry basket. Yeah, who feels like they need to join AARP with her sciatica?

I managed to get through 11 easy miles on Friday and Saturday but I could always feel it there, nagging me (“Haaaayyy. It’s your baaacck, how’s it goin’? ”). So I wasn’t sure what to expect of my performance at OJ on Monday morning.

Christmas day I ate a ton of beef and buttery things (Husband used 1.5 pounds of butter in his baking escapades) and about three-quarters of a bottle of wine (that was reining myself in, by the way). Went to bed at 9pm but didn’t manage to actually fall asleep until 11:30pm. Four AM came very quickly (and apparently this is just when my bachelor brother-in-law in Hermosa Beach was going to sleep). We hit the road on-time at 5am. I had to make an emergency stop both for emergency coffee and also the other kind of emergency, if you know what I’m sayin’ (Sbucks has clean bathrooms, yo).

Meanwhile I get a tweet from Sarah and we both pull into the parking lot at 6:45am, and walked down to the start at El Porto Beach. 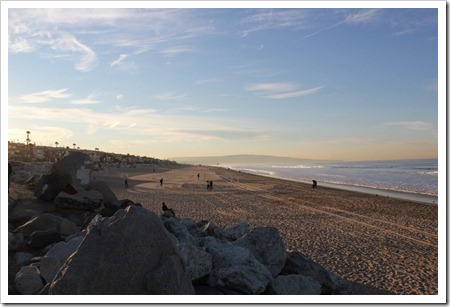 (I lived two blocks from here from 2001-2002. Aside from my apartment being a poorly maintained shithole, it had a small ocean view and you could not beat the location)

I got to meet Julie, a twitter pal, at the check in desk! And she also was doing the timing at the end. Volunteer extraordinaire!

Before the start, Sam and his wife, Tiffany, got up and said a few words about what we were running for – raising money and awareness of autism. 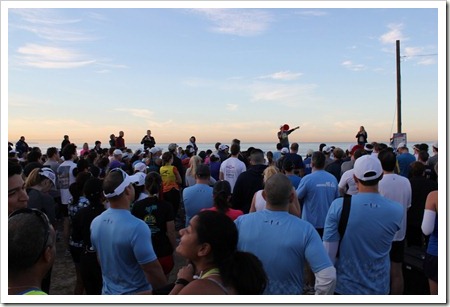 What stuck with me the whole race was one line Tiffany said – I’m paraphrasing here, “Run for the kids who have to live with autism every day.” I think we sometimes forget how they must feel trapped inside in own minds with this disease.

Then it was time to run! This race was capped at 300 entrants and it was gun-timed. So Sarah and I tried to squeeze our butts close to the start line. We took off right away - I had barely gotten my head phones on! Right from the get-go, Sarah pushed the pace ~8:05. And my legs seriously felt like lead.

You know when you’re running and you feel like the way you are landing must sound and look like a 300 pound gorilla? Just flopping your feet down in the most ungraceful manner? That’s how my legs felt the first six miles. My breathing was ok – but my legs. Man, they wanted nothing to do with this race. I did my best to hang on with Sarah, either next to her or just behind. It felt hard. Which, mentally, was tough because just two weeks ago at Santa to the Sea, 7:55 felt easy. I repeated to myself at least five times “Your legs will loosen up, just keep going. Don’t worry about the pace, you can pick it up later” 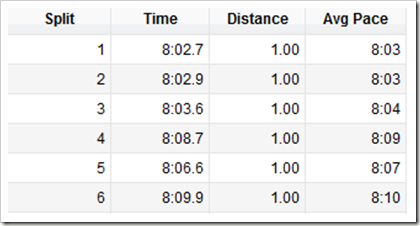 Mile 2.5 we saw Heather who cheered for us (incidentally, she was very quiet on the return at mile 11 – where was the obnoxious volunteering we saw at mile 2?!)

Mile 6 we ran into a headwind and saw a field small rocks all stacked precariously on top of each other along the side of the canal. Sarah decided Heather would think they were creepy. I agreed. Then just after mile 6, she high-fived Sam running in the opposite direction and took off. My legs were still unfreezing themselves so I just let her go. 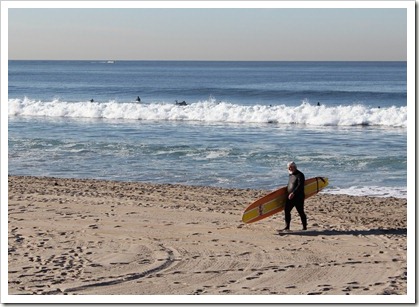 After the turn-around things started improving for me. I was landing less like Frankenstein and more like a normal runner. I had been routinely eating my clif shot bloks every odd  mile (I think this is my new strategy – it’s working) and drinking in the hopes I could salvage the race.

Hello 7:xx splits! Finally. Somewhere around mile 10 I caught up with Sarah. I wasn’t sure if I should try to drag her with me or if that would be annoying and obnoxious. Generally that shit doesn’t work with me, I have to decide to move out of my own volition, so I just said “You’ve got time banked” because she did. Even of the last miles were going to be painful, a PR was still possible.

Then my back decided that it was totally Over This Race. I hung on for another mile, and then we had a hill – nothing huge, but it was still a hill. Maybe like 20 feet or so. Killed my mile 12 split – 8:20. I just hung on for the last mile and change (the change was .23 – I apparently didn’t run good tangents or my Garmin was off). 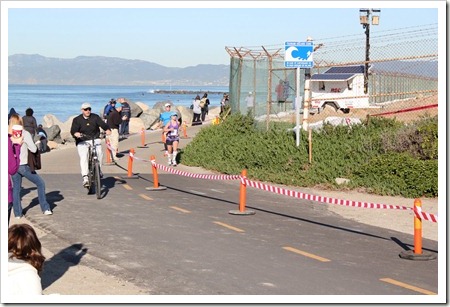 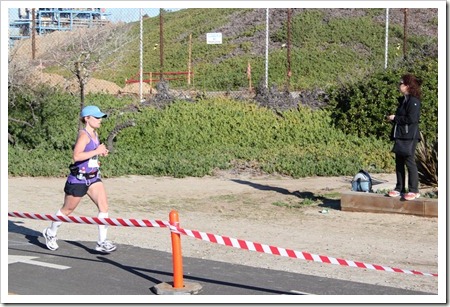 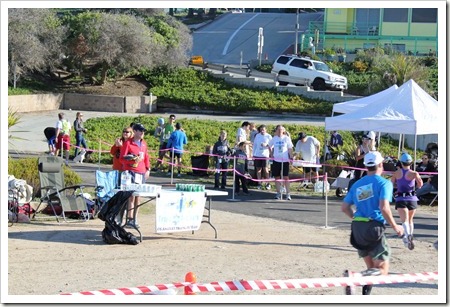 Considering how this race felt the first six miles, I am happy with the outcome. It’s my second fastest non-Fontana half marathon time (this whole having to write “non-Fontana” s getting old). Had I not run stupid tangents, I would have been under 1:46.

Apples to apples (i.e. garmin to garmin) it’s only 8 seconds per miles slower than Santa to Sea. With two 20-milers in recent weeks and a PR half marathon, I think my body is a bit tired. This week is my highest mileage week – 44 miles. A 9 mile tempo this Thursday, and 22 miles next Monday. I am SO READY FOR CARLSBAD TAPER ALREADY.

Hope everyone had a wonderful Christmas! Off to make my coffee, do laundry, maybe hit a yoga class (eh, maybe), and then tile my shower (loving my company’s holiday vacation policy).